Origins of the Tsabaran Civil War

The origins of the Tsabaran Civil War have been hotly contested, but a general consensus among commentators, academics and analysts is that the root causes can be traced back to the Communalist regime which rose to power in 19XX. Its policies, reforms and governing of the various ethno-sectarian peoples who reside in the country all played a role in establishing the divisions and controversies that sparked the civil conflict in 2020.

Commentators have also noted that the co-social democratic period between 1985 and 2005 also played a key role in fermenting and etrenching the socio-economic divides between the ethno-sectarian groups. This inevitably led to socio-economic grievences being utilised by competing political figures to champion radical change, while also degrading the shared Tsabaran national identity for a ethno-sectarian one.

Following the collapse of the Atudite-Pied Noir government, due to Red September in 19XX, a popular revolution backed by left-wing military officers established the Communal Republic of Tsabara on 1 October 19XX. Under the leadership of the All-Tsabaran Party of the Left (ATPL) between 1948 and 1950, the national ideology of Communalism was developed. Communalism, a leftist ideology sought to "unify the peoples and races of Tsabara, through reason and leftist solidarity." This resulted in the creation of a single-party state and the adoption of draconian laws enforcing secularism. Communalism viewed religion as the principal obstacle to a united and harmonious Tsabara, while the Communalist regime also worked for over four decades to undermine ethnic identity alongside sectarian. 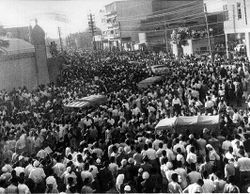 Red September overthrew the Atudite-Pied Noir government and led to the rise of the leftist and radical secularist Communalist Republic in 19XX.

The Communalist regime enforced its anti-ethnosectarian policies harshly, pursuing members of the Atudite, Irfanic and Sotirian clergies. It imprisoned thousands of clerics, laypeople and shuttered hundreds of places of worship. The holy sites in Adunis were left untouched and all religious ceremonies were kept under tight surveillance and government control. Those who celebrated or advocated ethnic identities and customs were also ruthlessly punished, while the regime worked to established a singular Tsabaran identity.

Prominent Tsabaran historian, Michel Gemayel wrote in 2006: "the Communalist regime saw religion and racial identity as foolhardy and obstacles toward equalism, while simaltaneously, it saw them as threats to social harmony in Tsabara. It was double-edged sword, well meaning but only kicked the can of ethno-sectarian identitarianism down the road."

Between 1948 and 1986, the Communalist regime restricted civil liberties and freedoms, while its economic policy proved highly centralised and ineffective in alleviating inequality. Furthermore, its economic policy in some areas worsened the divisions between the Atudites and Badawiyans, as it used its petrochemical exports to fund development of the fast-growing coast. The lack of development of the interior and strict restrictions on internal migration, essentially "imprisoned the Irfanic-Badawiyan population in the destitute and backward interior", while enriching and improving the living standards of the Atudite-Sotirian coastal regions. 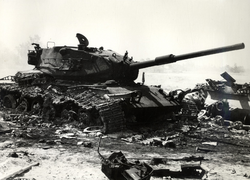 Tsabara's involvement in the Irvadistan War (1975-79) left over 85,000 dead and 150,000 injured and crippled the country's economy. This ultimately led to the collapse of the Communalist regime in 1986.

The decline of the Communalist regime began in 1975 with Tsabara's entry into the Irvadistan War, in support of its ally, the People's Republic of Irvadistan against the Union of Khazestan-Pardaran. During the four-year conflict, over 86,000 Tsabaran soldiers would be killed and 150,000 injured. The loss of life forged a long-sought after bond between Atudites and Badawiyans, though ironically, it led to united opposition to the Communalist regime. The war's human cost though heavy, fell far short of the economic cost - Tsabara's economy had all but collapsed in 1978 after a series of daring UKP air attacks on Tsabaran oil and gas facilities, as well as rail and road networks. Inflation skyrocketed, while the centrally-planned economy struggled to provide basic goods. Over the next seven years, sporadic armed uprisings by both Atudites and Badawiyans would undermine the integrity of the regime, mass protests and a general strike between 1983 and 1984 ultimately led to the peaceful transition to democracy .

Commentators and historians have noted that the systemic failures of the Communalist regime to reform the economy or use its vast oil revenues to develop the Badawiyan-dominated interior entrenched the dismal disparities in wealth and living standards. Its strict restrictions on internal migration maintained the stark divisions of ethnicity geographically speaking, while also denying Badawiyans access to the wealthy coastal areas. The involvement in the Irvadistan War devastated government budgets, which effected the Badawiyan population disporportionately, owing to their reliance on the weflare state. The war and subsequent resistance until 1986, led to a resurgence in ethno-sectarian idenities.

During the negotiations for a peaceful transition to democracy, the Tsabaran League for Democracy under the leadership of Gideon Yadin and Mustafa Karim, began to develop a new constitution. In recognition of the Atudite-Pied Noir government and the efforts by the Communalists to unite society, the new constitution developed a confessionalist co-habitation system, in which offices of state would be shared equally between the "Three Peoples." The presidency, which would hold few executive powers would be held by a Badawiyan, the Premier would be an Atudite and the Speaker of the Assembly would be a Sotirian. The new Supreme Court would seat three Atudites, three Badawiyans and one Sotirian. This unique system ensured non-ethnic or sectarian political parties and promoted cross-sectarian political groupings. 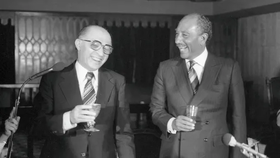 Gideon Yadin (L) and Mustafa Karim (R) led the democratic transition and served as President and Premier respectively between 1986 and 1994.

In the 1986 elections, Karim was elected president, while Yadin became Premier. The Karim-Yadin government would hold power until 1994 when its term ended. Much of their agenda was focused on reconstructing the country's economy in wake of the political unrest of the 1980s and the damage suffered during the Irvadistan War. However, much like the Communalist regime, these efforts failed to address the significant levels of wealth disparity between Atudites and Badawiyans.

In 1994, Aryeh Katzir was elected president, while Abdulmalik al-Amari became prime minister. Al-Amari was senior figure in the TLD and a known critic of the new constitution - especially his criticism of the presidency being directly elected. Al-Amari also noted the new constitution's continued secular nature was doing little to stem the rise of religious idenities. In 1995, the constitution was reformed to have the president appointed by the Senate, while also introducing a sunset clause to the division of offices by ethnicity. Al-Amari saw the need in that "eventually, we will progress beyond this notion of segregation, insofar that we will trust any politician regardless of his or hers faith or race." The 1995 constitutional amendments would eventually lead to the rise of Atwan al-Tughluq and Yahya Aboud.

The Katzir-Amari government succeeded in dramatically improving basic services including; education, healthcare, vocational training and infrastructure. The greatly expanded civil liberties, while also rolling back some of the Communalist laws on secularism. However, their economic policy relied too heavily on oil revenues and the manufacturing of the coastal cities, further degrading the interior. Their embrace of big-business and support high-pay low-labour jobs further entrenched the oil-coast centric position, which would become the economic orthodoxy of successive Tsabaran governments. Subsequent free-market orientated reforms increased Tsabara's reliance on Euclean markets for its exports and strong economic growth, while this also made Tsabara more vulnerable to Euclean economic downturns. 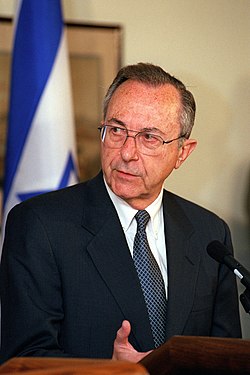 The resignation of Ephraim Oren in 2005 led to the rise Atwan al-Tughluq and the end of the confessional power-sharing system.

The second term of the Katzir-Amari government saw further expansions of civil liberties and reductions in secularist laws, this enabled a return of informal influence by the Atudite and Irfanic clergy. In 1999, the government authorised the return of religious schools and the wearing of religious symbols and clothing. Sara Khateb, a prominent Tsabaran poet at the time wrote, "our democracy provides us with the dignity and rights long forbidden, yet, it does not provide us the dignity of food on the table, for many, the rights of liberty do not match the rights of prosperity." The reforms and the later 2005 Global Recession would prove devastating in popular support the young vibrant democracy, while also providing the atmosphere vital for the emergence of religious-populism and demagoguery.

In 2002, Ephraim Oren was appointed President and Saad Rajiha was elected Premier. Rajiah was publicly known as the "sheik in a suit" due to his fervant observation of Irfan and his government was swift to reduce secularism as much as constitutionally allowed, without amending the document. However, Rajiha was equally strong in his support for the confessionalist system and unified Tsabaran identity. His government contributed greatly into cultural programs and education, aimed at promoting progressivism and cohabitation. In 2005, President Oren resigned from office following the leaking of his extramarital affairs with a government aide. His resignation came three months before the sunset clause on the office-sharing amendment, in respect to clause, the Senate set about appointing a replacement. Atwan al-Tughluq was nominated by a group of Atudite and Badawiyan senators from the United Tsabara Party, his role as an activist military officer during the 1980s and his promises of working with the Premier to reform the economy saw him defeat Moshe Arad and becoming President.

Retrieved from "https://iiwiki.us/mediawiki/index.php?title=Origins_of_the_Tsabaran_Civil_War&oldid=163203"
Category:
This page was last edited on 5 February 2020, at 18:06.
Privacy policy
About IIWiki
Disclaimers