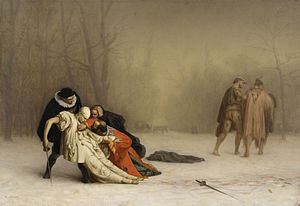 The Lutte after the Ball by Marc Bélanger

Parilutte (from Gaullican: pari lutte meaning "fighting with risk" or literally translated as "betting fight") is the term used in Satucin for both professional fighting, and a number of other sports. Originating from various indigenous and colonial practices, it has developed into a unique form of the genre, often characterized by colorful masks, pre-combat rituals, wagers by both audience and combatants, and a system of honour. The wearing of masks has always had special significance, and matches are sometimes contested in which the loser must permanently remove his mask, effectively retiring them.

Despite being treated as a single sport, it is actually an amalgamation of various exercises. These include: dueling, fencing, fisticuffs, shooting, archery, javelins, wrestling, and horse racing.

Many of the more controversial and dangerous elements of parilutte have been regulated or discarded over the years, with duels to the death (affaire sans honneur) having been outlawed in 1911. Despite a decline in the late 19th and early 20th centuries, it received a surge of popularity in the 60s and has since been celebrated as a fusion of indigenous and settler culture in Satucin.