The Republic of Polder Island (Dutch: Republik de Polder Eiland) is a tiny island nation consisting of 11 regions with a total resident population of 24,248,912 (2019). The nation was founded by immigrants from what would later form Bakyern in 1589, and the current form of government, The Eighth Republic, was formed in 1849. Polder Island acts as a tax haven and major trading port within the equatorial seas of the Western Hemisphere of Anteria.

While Dutch and English are the official languages of the Republic, and thus are spoken extensively (by 92% and 83% of the population, resp.) a significant minority of the population also speak Spanish (32%) and Suodenese (19%). Multilingualism is encouraged in the Polderian education system, with 9 out of the 11 regions requiring all grade schools to educate students for at least eight years in one foreign language, and for ten years in English and Dutch. About 8% of the population reports speaking at least five languages.

Polder Island is ethnically diverse, and has a high level of ethnic mixing. Though the people who originally came to the Island were Germanic, Tsokeikan and Suodenese immigrants over the centuries have combined with Germanic ethnic group into the Polderian ethnic group.

More recently, Canterian and Paulite immigrants from various countries in the Western reaches of the world have arrived in large numbers, increasing the concentration of Spanish and English speaking peoples.

The Polderian Reformed Church (Dutch: Eilander Hervormde Kerk), also known as the EHK, is the largest religious group on the island, consisting of 45% of the population, and is state sponsored. It is a Protestant church.

Religious tolerance is guaranteed in the Polderian constitution, and this has led to a propagation of various religious groups within the island. More recently, the number of people not identifying with any religion has increased greatly, from 9% in 2000 to an estimated 21% in 2020. This number is expected to increase in future years.

The teenage pregnancy rate is 9 per 1000 women. This has declined by 65% since 2000, due in part to campaigns for reforms in sex education on Polder Island. The total fertility rate in 2019 was 2131.8 births per 1000 women. Same-sex marriage and adoption is legal throughout the country. 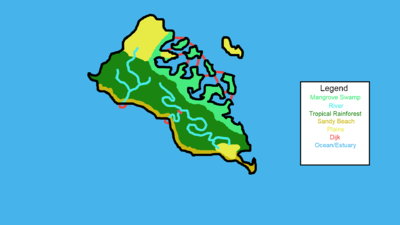 Polder Island consists of two main islands: Polder Island (Dutch: Polder Eiland) and North Island (Dutch: Noordiland). It has a few natural harbors around the coast, but is mostly naturally marshland. As most of the main island’s northern coast is mangrove swamps, the south is where most of the population is concentrated. The exception to this is the city of Groningen, which is on several slightly elevated hills, providing some natural removal from flooding.

The biggest river is the River Milvan (Polder Eiland), on the southwest side of the island. The islands as a whole are very low. The highest point, on North Island, is only 504 m above sea level.

The temperature remains at an average 25oC year round. The dry season occurs from May to September, and the wet season occurs from November to March. The wet season produces more rain than would be expected for the area, due to the nearby warm seas, and the shape of the continents, producing a conformation which ensures the trade winds bring in moisture. The coldest recorded temperature was 4oC on Mt St Jheronimus (Polder Eiland) in 1867. The hottest recorded temperature was 51oC in De Haven in 2014.

Polder Island is a federal constitutional republic, consisting of 11 regions. The government also contains 25 guilds, which function similar to trade unions and corporations in other nations.

The Synod is the domestic portion of the national legislative branch, and it is headed by the First Minister (Dutch: Eerstminister). The Synod consists of 426 elected representatives, plus one representative from each guild, for a total of 451 seats.

Polder Island has, historically, been dominated by two parties in politics, with smaller parties retaining some amount of seats in various assemblies and councils. Elected guild officials, by law, cannot affiliate with a party, and so their seats are labeled “Guild Member” in the Synod.

The two dominant parties are the politically central Christian Democrats and the leftist Labour. Christian Democrats tend to support religious education in schools, economic protectionism, and reduced income taxes. Labour tends to support increases in government spending, increased social assistance programs, globalism, and investment into environmental activism. Unlike other countries, neither party concerns itself with corporate policy, as this is largely regulated by the Council of Guilds.

Synod elections are held once every four years, typically. The last election was held in 2016, and resulted in a slim Labour majority (237/451 seats). This resulted in the leader of the Labour Party, Marius Jousma, retaining the position of First Minister.

Labour currently governs in 4 regional assemblies, the Christian Democrats govern in 6, and the Noordiland Independence Party, a right-wing independence group centered in the region of Noordiland, rules its eponymous assembly.

Polder Island’s Armed Forces employ 630,000 active duty personnel. Most of these personnel are in the Navy or Coast Guard, which together comprise 78% of the total military personnel. 10% are members of the National Guard, and 12% members of the Army (which includes the Air Force).

The Military has not seen active duty since the Haven Uprisings ended in 1937.

Polder Eiland is a member of the Western Trade Federation. It has maintained historically good relations with Bakyern, being of similar culture. Though relations have improved with Zaravai recently, from 1906 to 1914, a war was fought with the similarly sized island nation over spice trade. Foreign relations are maintained by the President and the Department of State.

The National Railway Network (Dutch: Nationaal Spoorwegnet), also known as NSW, has replaced the need for highways. The NSW boasts 341 stations across the country, 103 of which are in De Haven. These railways are facilitated by high-speed trains. Aside from this, a minor network of local highways is in place in the rural regions, but in the regions of De Haven, De Graafschaap, Groningen, and Milvandam, most personal motor vehicles are banned, except under exceptional circumstances. Instead, a network of bike highways across the country has been put in place.

The Culture of Polder Island is largely Germanic in nature, with a few influences from the Eastern part of the nearby continent. Culture has been heavily influenced by the Reformed church and its values, and by the nature of the island as a small trade republic.

Polderians are characterized often as being shrewd, timely, industrious, miserly, and intelligent. The belief in the common good and the family as the basis of a strong society have shifted policy towards a stronger welfare state, while retaining many of the more socially conservative aspects of society.

The historical position of Polder Island as a trade republic with many immigrants has resulted in its people adopting a focus on honesty, openness to experience, and multilingualism. Its position as a low-lying island prone to flooding has, especially in recent decades, led to an increased focus on education and open sharing of ideas.

Polderian cuisine involves a complex variety of spices and meats. Given that historically, many ships would go to port in De Haven expecting cured meats, the markets there are teeming with spiced and cured meats of many varieties, along with various kinds of citrus.

It is very common for food to be bought fresh from open-air Farmers Markets, even meats. Attempts to start fast food chains have failed, as the ubiquity of these markets with fresh-prepared foods from the farms in the countryside make it unreasonable to pay for fast food. Restaurants are considered a luxury, and as such, rarely see regular use outside of very wealthy circles.

Recently, vegetarian and vegan cuisine has seen a rise, especially in the cities. Health food overall has become more popular since a government health initiative which has been ongoing since 2004.

Historically, the liberal arts have been tied to the church, and as such, often reflect Reformed values. Historical artwork tends to shun depictions of religious figures in a sanctified way, and instead tends to depict them in a highly realistic fashion. More recently, philosophy in Polder Island has been shaped by the post-modernist movements. This has influenced artwork majorly, contributing to the production of more abstract designs in various areas of artwork.

Polderian Music, historically, was tied to the production of hymns. It is distinctive for its heavy use of string instruments, and for its use of more somber tones. In recent times, this has contributed to the distinctive PolPop scene, which focuses heavily on darker tones than normal pop, with heavy contributions from guitar and piano. Polder Eiland also has one of the highest per capita concentrations of metal bands, and the metal scene in Groningen is especially famous, attracting artists from around the world to play in the annual GronFest.

Polder Eiland maintains relatively friendly foreign relations with most nations in Anteria. Notably, it is a founding member of the Western Trade Federation, a member of the Initiative for Global Peace, and a member of the Sekidean Union. Polder Eiland has notable long-term agreements with Canton River Delta, Bakyern, and Shadoveil.

All nations in Anteria are ranked on a scale from 0-7 in terms of their relationship level relative to Polder Eiland. The levels roughly correspond to the following:

Level 7: Economic Union -- There is a high level of economic integration and cooperation between Polder Eiland and this nation, to the extent that effectively they must act in union diplomatically.

Level 6: Economic Treaty Alliance -- There is a moderate level of economic integration and cooperation between Polder Eiland and this nation, along with strong diplomatic ties, including mutual defense treaties.

Level 5: Treaty Alliance -- Polder Eiland has entered into some kind of mutual alliance with this nation on a level requiring diplomatic or economic cooperation.

Level 4: Alliance -- Polder Eiland is in a trade organization with this nation, or has traded regularly to the extent that continued improvement of relations would be a net benefit to Polder Eiland.

Level 3: Neutral -- Polder Eiland has little trade with or understanding of what this nation's impact is towards it.

Level 2: Watchlist -- Some level of hostilities have erupted, causing Polder Eiland to be wary of this nation.

Level 1: Hostile -- Animosity actively exists between Polder Eiland and this nation. Generally, travellers from this nation must be visa-approved to travel to Polder Eiland.

Level 0: Warring -- Active declarations of war on Polder Eiland or from it exist with this nation.

Polder Eiland has thirty-one officially recognized holidays. Holidays are mandatory days off for non-essential employees. Election Day is only a holiday in years when elections occur.

Credit to cartographers from Qazhshava/Lakkatha for their contributions to the maps.

Retrieved from "https://iiwiki.us/mediawiki/index.php?title=Polder_Eiland&oldid=289587"
Category:
Hidden categories:
This page was last edited on 22 December 2020, at 08:02.
Privacy policy
About IIWiki
Disclaimers