The Privy Council, or Inner Council (中大夫省, trjung-ladh-pja-srêng′) in some translations, offers private advice to the Themiclesian emperor. Their convener and chairperson (in some functions) is called the President of the Council (中大夫令, trjung-ladh-pja-ringh). The group has few formal meetings specific to themselves, but their privilege of attendance means a number of them can usually be found around the emperor at any time. They have no formal powers, though historically their proximity to the throne has generally rewarded them with royal favours and desirable appointments. The Privy Council has no fixed membership or term of office; once appointed, the councillor retains the title for life.

The phrase Privy Councillor (中大夫, trjung-ladh-pja) is Menghean in origin, first attested in history in the 7th c. BCE. There are two possible interpretations of this phrase, either as "middle great man" (i.e. as a rank between the "upper" and "lower" great man, cf. lugal in Sumerian) or as the "inner great man" (i.e. in the palace, as opposed to a great man in a posting in the shires). Considering its meaning in Themiclesia, after Menghean abolition in the 1st c. BCE, the second etymology seems likelier. The word "President" (令, ringh) is commonplace to denote the officer responsible for a body or group; in other contexts, it is translated as "director" or "commander" as required by Casaterran analogues.

The phrase "privy councillor" is first attested in Menghe in Spring and Autumn, annals of Jun State during the Warring States Period. In Themiclesia, it has been identified in the Ran-lang Collection, an excavated hoard of bamboo slips containing government officials' salary structure. The corpus has been dated to the 2nd c. BCE and associated with the predecessor state to the Tsjinh Dynasty (265–420). As it is assumed Themiclesia was constantly under the political influence of Menghe during this period, privy councillors can be understood through both its evolution in Menghe and in Themiclesia.

The position of "privy councillor" is found not only in the Jun State, but at least three others, suggesting it was a common feature of many courts in early Menghe. While some scholars have argued this reading of trjung-ladh-pja is incorrectly identified with the more copiously described position of privy councillor, others cite the fact that, in the vast majority of cases, trjung-ladh-pja refers to a single person and is mentioned in parallel with other terms that clearly refer to offices, rather than ranks. Much of the debate originates arises due to conflicting descriptions of feudal and administrative ranks in the Warring States era; some provide that there were only two ranks of ladh-pja (great man), being djang (upper) and gra’ (lower), and others assert a third trjung (middle). Recent studies conclude that the "middle great man" is not attested in other historical documents and may be an embellishment by romantic scholars. Thus, most researchers now accept trjung-ladh-pja as an office, rather than rank, in the context of the Warring States Era.

The function of the trjung-ladh-pja is less conclusively described. At the very end of the Warring States Period, the term trjung (middle) is customarily used to describe the residence of a state's ruler. Attaching it to the generic title "great man" yields "great man of the palace", which agrees with attestations in the later Meng Dynasty. It has been pointed out that in all known sources dating to the Warring States Period, not a single reference to the function of the privy councillor has been recovered. Nevertheless, since the Meng State itself existed during the Warring States Period and was accustomed to the terminology of trjung to refer to the palace, most scholars accept that trjung-ladh-pja does refer to an officer of the palace in largely the same role as later in the Meng Dynasty. In that period, privy councillors did not have defined roles but functioned as advisors, envoys, and special commissioners, according to the ruler's instructions.

Under Emperor Mu (武帝), the privy councillors were renamed "illustrious councillors", due to their affiliation with the Illustrious Porter (光祿勳); along with this, they were promoted from an unkonwn rank to less-2,000 bushels—just shy of the chancellor and the highest-ranking ministers.

In the Ran-lang Collection, "privy councillor" was noted to have a salary rank of 2,000 bushels—higher than in Menghe, before or after they were there promoted. This astounding record has prompted some researchers to argue that this "privy councillor" refers to the "head of the privy council", where the "head" character, which occurs at the end of the title, is either missing or omitted.

An alternate interpretation is that the "privy councillor" here is used in its Warring States sense, where it probably had some fixed portfolio. This would imply Themiclesia retained the more archaic use of the title, while Menghe has innovated, but there is no conclusive argument over this issue currently. Considering the fact that the only other officer to enjoy a salary of 2,000 bushels is the President of the Tribunes, the head of the bureaucracy, it seems fairly certain that ordinary privy councillors, if they existed, is highly unlikely to have been the referent in this record. Another argument, recently gaining favour, posits that the President of the Tribunes (read as the "President of Affairs") managed the state bureaucracy, while (a single) Privy Councillor managed the palace's (thus "privy") bureaucracy, hence the parity in their remuneration.

Regardless of the nature of the office during the Pre-dynastic period, the unification of Themiclesia under the Tsjinh Dynasty occurred under heavy Menghean influence, which added a number of offices and altered the roles of others, mostly according to Menghean equivalents. If the Privy Councillor (accepting the third view in the paragraph above) had a managerial function in the ruler's palace, by the Tsjinh Dynasty it has been displaced by Privy Treasurer (少府).

In Menghe, privy councillors gradually lost prominence as the monarch's senior advisors without portfolio; however, in Themiclesia, it seems privy councillors remained in the confidence of the monarch for much longer. Several factors may have contributed to this divergence. During the reign of Emperor Gyeong, the President of the Privy Council had evidently been abolished, the privy councillors thus assigned to the leadership of another officer. In Themiclesia, the Privy Council and the Gentlemen-at-Arms remained independent. During the Tsjinh Dynasty, the throne was not nearly as powerful as that in Menghe. Rather than challenging ministers directly, the monarch appointed former-ministers, especially those pushed out of power, to use them to balance current ministers' powers and to be informed about their shortcomings.

At the beginning of the Mrangh (543–762), influence from the Menghean system is again detected. The new position of Councillor-at-Large (散大夫, sêr′-ladh-pja) was introduced. Menghean influence did not displace Themiclesia's institutions as much during this period, due both to their maturity and dubious reputation of the Meng royalty, which just lost their entire realm to Kim "barbarians". The Councillors-at-Large were under the same presidency as the Privy Councillors, but their appointees are markedly different. Whereas Privy Councillors tended to be experienced politicians, Councillors-at-Large were relatively inexperienced individuals. In later usage, Councillors-at-Large often served as envoys to foreign states, alone or in conjunction of another official, but this tendency was not obvious during the Mrangh.

The Privy Council consists of two classes of councillors, privy councillors and councillors-at-large. While there is a difference in rank and thus salary between the two, relative influence is largely based on previous experience, reputation, and personal relationship with the monarch. 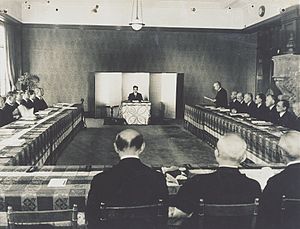 Privy Council held in 1946, deliberating on return of the royal presence to the capital city, held before President of the Council Mak Rjam (Prime Minister 1924–1927)

The modern role of the Privy Council evolved as a result of political compromise in the pre-modern period. On the one hand, the Council of Correspondence was bound by administrative precedent and cultural precepts; if the Council overruled the crown too frequently, it exposed itself to criticism from political enemies. On the other hand, the Crown feared political repercussions and blemishes to its Mandate of Heaven in the event of an unpopular policy made unilaterally. There was thus a need for mediation between the crown and Council, in which neither party risked its reputation or attempted to override another; Privy Councillors, having copious governing experience, came to fill this requirement.

The power of the Privy Council, in relative terms, waxed to its maximal extent during the 19th century. The political process of the century was one of rigidifying relationships, not solely between the crown and political institutions, under the influence of the Enlightenment and other Casaterran philosophies, but also between it and administrative bodies that nominally served it directly. After a major stoppage on royal expense in 1801 enacted by the Lord of Gar-lang, the Privy Council managed the emperor's purse after establishing that some degree of control over royal money was needed.

In plenary meetings of the Privy Council, members also deliberate on the Crown's role in various public policies. The results of these deliberations are non-binding on any party; the Emperor is ultimately free to accept or ignore the advice of the Privy Council, and there is no statutory process to facilitate either outcome. The lack of statutory process is, under most circumstances, not an issue, since the Emperor may not go against the advice of his ministers publicly. However, before policy is made, the Privy Council may point out to the Emperor or the government that a certain policy may portray the Crown in a certain light and advise reconsideration or minor revisions. In case of disagreement

Retrieved from "https://iiwiki.us/mediawiki/index.php?title=Privy_Council_(Themiclesia)&oldid=228755"
Categories:
Hidden category:
This page was last edited on 21 July 2020, at 01:16.
Privacy policy
About IIWiki
Disclaimers