Rhava, officially the Republic of Rhava (Nalinese: Ra Và Nam, Sichaeng: ຣາວັນນາ, ravanna, Kedani: رافانام, rafanam) is a country located in Southeast Alharu, and is bordered by Kharai and Baho to the west, Ngoc Luat and the Adisi Ocean to the south, and the Whangahui sea to the east. Rhava is divided into 24 provinces, 9 territories, and 1 municipality covering 240,000 square kilometers, with a population of about 39 million inhabitants, making it Alharu's third-most populous country. Its capital is Rhavapura and its largest city is Chó Vàng (Chow Chó). Rhava has a diverse geography with tropical jungles such as the Calico Jungle, plateaus such as the Camdong Plateau, and mountains like the Ho Heak Mountain Range. It is a multi-ethnic, multi-lingual, multi-religious and multi-cultural state, hosting many different peoples and languages.

Rhava is a member of the Assembled Nations, Group of Island Nations, EOS, and LAANN. An isolated nation in the late-20th century, through a series of economic reforms in 2007 along with mass infrastructure plans across Indonadisi. The Rhavanese economy is both agriculture, with many tropical crops and rice being farmed in central Rhava, along with a large fishing industry, and also being the largest Palm Oil producer in the wurld. Rhava is a developing state in Eurth, and a regional hegemony.

Since the Rhavanese War in 1951, Rhava has had an outbreak of hate crimes between various ethnic groups, and a ramp up on terrorism between extremist Bikammic followers, towards the pro-muslim laws that are becoming more common in Rhava. Most of Northern Rhava still opperates by the old aristocracy with the Mê clan still having a lot of power. The Mueng and Pyin in the Autonomous Territories in western Rhava as well as the free states northwest of Rhava are de facto independent, while ethnic and relgious tensions also continue between Rhava and neighboring Kharai. The AN has already issued peace keepers and has enforced tribute between the states in Indonadisi.

Known as Rhavanam in the Rha language, the name is though to originate from the combination of three words; Rha (រⲁ), Vanā (វⲁនⲁ), and Nam (នⲁⲙ).

Rha, alternatively spelt Re is the Rha word for sun, originating from Sino-Rhavanese and the Huang word Ri meaning sun.

Nam, is the Rha word for south and is originated from the Nalinese word of Nam, and Huang word of Nan meaning south.

Rhavanam together means 'Sun of the Forested South' or alternatively 'Sun of the Southern Jungle'.

Around 5800 BCE Austroasiatic and Austronesian peoples moved to the region around the Ngọc river, in present day Northwestern Rhava. They settled around the mouth of the river, in the delta. City-states in the coming decades were settled from the river to west, towards the Ho Heak Mountain Range, and east towards Đuôi Rồng Báo (ຫາງເສືອດາວມັງກອນ) mountains. The ancient civilization eventually formed together as one entity, Sukhmeng, a majority Sichaeng nation. Sukhmeng would eventually merge with a neighboring kingdom, and switching the capital to Hueon (ເຮຶອນ) at the midpoint of both merging kingdoms. During the last king of Sukhmeng, in 1023 BCE, the Rhavanese side was sacked by southern invaders, essentially ending Sukhmeng. In the chaos of Sukhmeng, a new kingdom was created in the absence of rule, the Bồng Nga (ດອກ​ໄມ້) kingdom ruled over much of southern Rhava and central and western Kharai. In 342 BCE king Chế Bố Để (ລຸງໂພທິ) took over the northern Austronesian kingdom of Bokur, a seafaring people who originated from somewhere near Kertosono. The Bồng Nga kingdom developed more advanced boats from the already strong models of Bokur, building a huge navy, and asserting naval influence over the entire island.

Bồng Nga forces would usually raid the frontier in present day Camdong Plateau and other surrounding provinces, and in 220 BCE they burned down the village of a man named Alang Kha Chue, part of the small Mueng peoples. He united the peoples, taking control of the Bồng Nga kingdom, and founding the Nhan dynasty, where he would take the name, An Nhan. He would order invasions of surrounding areas, and with his superior military tactics, he would take them. He would even launch invasions on the Yellow Empire, introducing war elephants to Alharu and founding his own Yellow dynasty and declaring himself the next emperor of the dragon throne. The Nhan dynasty was short lived, because during his son’s rule many provinces rebelled and his son was removed from power, and a new dynasty claimed the dragon throne. Rhava once again would fall under Huang rule, with a provincial governor known as the Nian lord would take power. Eventually a woman named Linh, from a powerful clan in the south defeated the Nian king, and founded the Tran dynasty, the first Nalinese dynasty. The Ly, Nguyen, and Tram dynasties would follow.

In 1120 CE Kedani invaders would invade from the north, founding the first of 3 Islamic caliphates. The caliphate was named the Alawal, or “the first” in Kedani. During the caliphate science and culture would advance in Rhava, as well as Islam was introduced to the country. Islamic art thrived in Rhava, forming with the native culture and producing Islamic patterns, with vibrant colors. After the Alawal Caliphate, came the Shaeballah dynasty, and with this the caliphate expanded even further south and west, fully enveloping all of Rhava. After came the caliphate of Hanaa, and the Hanaa dynasty. This was the longest caliphate lasting until 1407 CE and was able to rival the Yellow Empire to the west, which at this point was beginning to crumble. With the fall of the last caliphate, Rhava and surrounding territories shattered into multiple Islamic states, fighting over land and conquering each other.

In 1410 King Channarong Ismail Phatsakon Saeh Araya (Channarong Araya), founded the kingdom of Araya. The kingdom of Araya was the last great empire of Rhava, being a thalassocratic empire, that stretched across the island, and surrounding ones. Araya also had a strong Islamic population and influence, thought not as much growth like during the caliphate. 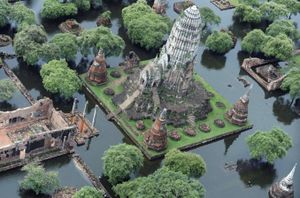 In the early 1600s Salvian traders established port cities in King’s Corner Rhava. By 1623, they began landing in the Rhavanese Song delta but were forced to leave because of Rhavanese persistence to keep these "strange" people off their land. The Salvians had less interest in the territory than they did of the Kidney Islands, which might have been another reason they did not pose much of a threat. After having successfully settled the northern island of the Kidney islands they set their eyes on the southernmost island, however it was owned by the Rhavanese kingdom of Araya. Realizing this the Salvians started a campaign on Rhava, taking Thannam, and then moving on to mainland Rhava, which Salvia called Nalin (Nhà Linh). The Salvian quickly overtook the Rhavanese military, annexing Rhava in under two months pushing the previous monarchy past the Rhavanese border into the dense jungles south of Chó Vàng to regroup.The Salvian empire ruled in absentia, a governor was put in charge, and his name was Angelo Rawiri. With the colonization of Rhava, it brought new religions to the country including Catholicism. Catholic churches were raised in most cities, with Steeple Hijos de Dios in Chó Vàng. The city had a massive revamp, with Salvian culture and catholicism updating the city to a modern version. To this day it is seen as a mini Salvia in Rhava.

In 1782 Lady Nayasarri led the People's Revolt, where the nation took control of colonial outposts, eventually declaring the nation independent. Nayasarri sadly passed away during a battle somewhere in southern Rhava, and is still honored as a hero to this day. Rhava formed a union with surrounding colonized states, named the Naga Kingdom. It’s democracy however was very corrupt, because of the nonexistent court system, and the corrupt senate, which was filled with bribes. Regardless, the Naga Kingdom industrialized Rhava, bringing it into the modern era, with the kingdom participating in multiple international conflicts, such as the Voltan Civil War.

In 1940, during the Great Alharun War, Salvia tried to invade the Naga Kingdom. Fulgistan seeing this stepped in and took control of the crumbling Naga Kingdom.War ensued for many years with no country ending up on top, eventually Fulgistani and North Rhavanese troops were able to beat the Salvians at the battle of Thuyền Gặp, which was the bloodiest battle in the war. At the end of the war, Rhava was under the control of Fulgistan. Peace was relative, so the Rhavanese economy suffered greatly from the new communist reforms, as well as religious freedoms dropped.

In 1951 there was an extreme backlash towards foreign powers, in Rhavanese affairs and politics. Siang Jabour Khamla Me Malouf led multiple revolts in cities, hailing from the Mê clan, he had the resources to quickly take the already rebelling north, and lead a full on invasion into the south. In 1956 Fulgistan and international intervention was removed from Rhava, with the country becoming an Islamic Republic in 1957, and entering economic isolation.

In 2007 the economy was reopened, and Rhava is now one of the largest Alharun powers, population wise, and has much influence over its neighbors. Rhava has openly denounced Anglian influence in the nighboring Kidney Islands, and mantains good relations with regional hegemony, Fulgistan.

Rhava's key geographic features originate from the Adisi Plates and Fulgiotan Plates 82 million years ago, the Ho Heak Mountain Range. In the eastern area, known as the lowlands, is where most of farming and agriculture, while in the rocky north mining is more popular in the Đuôi Rồng Báo Mountain Range. In the east of the Ho Heaks is the Camdong Plateau, which is home to the indigenous group to the islands, the Mueng. Rhava is surounded by two main rivers, the Ngọc and the Sông rivers.