Sanslumiere, officially the Republic of Sanslumiere (Gaullican: La République de Sanslumière), is an island country comprising of the islands of Sanslumiere and Falaise, as well as the three smaller islands of Citadelle, Saint Julien and La Roche. Sanslumiere is the largest and most populous nation entirely within the Arucian archipelago and is situated at the western entrance to the Arucian Sea, where it meets the Vehemens Ocean. It shares maritime borders with Eldmark to the north, TBD to the east, and Aucuria to the south.

Although the TBD people originally inhabited the islands, following its discovery by Gaullican explorers in 1507 the island of Sanslumiere became home to one of the first Gaullican colonies in the New World, Decouverte, and would become a major trading hub as the "Gateway to Asteria Inferior". The islands' four centuries of colonial rule saw the indigenous TBD virtually eradicated and replaced by Gaullican settlers and a large number of Bahian slaves, with Sanslumiere becoming a leading exporter of sugar and home to the Gaullican Arucian Squadron.

Following the end of the Great War, Sanslumiere was granted independence from Gaullica, resulting in the outbreak of the Sanslumièran Civil War between the Gaullois aristocracy and revolutionary Bahiaux Workers' Front. The war officially ended with the Treaty of Monpain and the Republic of Sanslumiere was declared, which has maintained an [Apartheid] system of government since, resulting in international controversy.

The country shares its name with its largest island, whose name derives from the Gaullican "sans lumière"; literally meaning "without light". This name was supposedly attributed to the island by its discoverers for the way that the island's largest peak, Mont Verlois, casts a shadow across the north-eastern portion of the island at sunset.

The country's next-largest island, Falaise (Gaullican for "cliff"), bears its name for the island's coast, which is largely covered in cliffs. One of these cliffs, Point d'Âmepleurs (derived from the Gaullican for "crying souls"), is infamous for its high number of suicides.

The remaining islands of Sanslumiere; Citadelle, Saint Julien and La Roche, are collectively known as "Trois-Îles" (Gaullican for "three islands"). Citadelle, the largest of the three, takes its name from the Citadelle du Roi (Gaullican for "King's Citadel"), a large fortress situated at the entrance to Découverte Bay that commands the island's south-western point. Saint Julien was named after the Solarian Catholic saint of the same name, as the island was charted on his Feast Day. Finally, the smallest island, La Roche, is named for the large limestone rock which dominates most of the island.

- Sanslumiere centre of Entente naval operations in Asterias - following loss of naval supremacy, Sanslumiere blockaded and bombarded until end of war - administered by Alliance under Arucian Federation from end of war until 1940

Events leading up to the Civil War

Following the forced independence of Sanslumière from Gaullica, the colonial elite tried to establish the Gaullican ex-Governor of Sanslumière, Herman Gouronne, as an autocratic dictator. Gouronne refused, however, famously saying "it is not my place to rule what rightfully belongs to the king of Gaullica." This resulted in bickering and indecision between the Gaullois elite that left the new nation without a leader nor proper administration, creating a power vacuum that allowed Horace Mougâbe to establish the Bahiaux Workers' Front (FTB) in Monpain with little opposition. The Front was able to expand its influence across Falaise while the Gaullois elite were distracted by their petty feuds, only receiving real opposition from the local Gaullois landowners.

The end of the relatively peaceful expansion of the FTB was marked by the September 11th Attacks, which saw the violent lynching of several Gaullois landowners in Marécage after they attempted to break up a FTB rally. While only 14 were killed in the violence, the sheer suddenness of the lynchings, coupled with the Bahiaux chants for the Gaullois to "get out of Marécage", caused many to flee from Falaise to Découverte, where they delivered exaggerated reports of Bahiaux uprisings and talk of a revolution. Upon hearing these reports, Ruben Baptiste, Commander of the Sanslumièran Army (previously the Sanslumièran Colonial Garrison), occupied the capital and declared himself "Supreme Guardian of Sanslumière", declaring a military government and martial law "until such a time that the nation has gained stability."

While the new Sanslumièran Military Government (GMS) was able to secure the Trois-Îles and most of Sanslumière itself, it faced strong resistance in Falaise and the northern regions of Sanslumière. In response to Baptiste's coup d'état, the FTB declared the Free Republic of Falaise (RLF) in Monpain on the 30th October 1935, an event often know as the "October Revolution". The next day, the GMS declared anyone affiliated with the FTB "enemies of the state" - a capital offense, and entered an official state of war.

The opening months of the war saw the beginning of the Sanslumière Campaign, whereby the Sanslumièran Military Government fought an anti-guerrilla campaign in the island's northern regions of Escalade and Mont Verlois. Although there was unrest in the island's other regions, they never erupted into full scale guerrilla warfare due to their lacking the rough terrain of the north, where most anti-government forces rallied. The hills of Escalade and mountainous terrain of Mont Verlois allowed the Bahiaux guerrillas to establish hidden bases in caves and abandoned Great War tunnels, while they received supplies from civilian sympathisers throughout the island, as well as from smugglers from Falaise.

The GMS established a network of military outposts and checkpoints across Escalade's major roads and settlements, severely restricting the movement of civilians between towns and imposing a curfew which if breached resulted in the offender being sent to holding camps in the south without trial. While this stage of the Sanslumière Campaign saw no major skirmishes, there were regular exchanges of gunfire across Escalade, and over a thousand civilians were sent to holding camps in Côte d'Or, where they were forced to work in harsh conditions, mining gold for the GMS.

Meanwhile in Falaise, a minor guerrilla resistance (much smaller than the one on Sanslumière, due to Falaise's relatively small Gaullois population) took place in the rural areas of the island. The new government undertook a campaign of arresting the local Gaullois population for fears of "Sanslumièran sympathies", interning them in various colonial prisons, and sponsored smugglers running supplies for the resistance on Sanslumière itself.

The mass arrests of Gaullois civilians in Falaise led to severe overcrowding in the island's prisons, which were few in number and not designed for the masses of prisoners flowing into them. Due to the lack Bahiaux officers in the pre-Civil War Sanslumière police and Colonial Garrison (Bahiaux were not allowed to serve in either), the RLF was forced to rely on local militias to undertake arrests and run the prisons, resulting in significant corruption and the unpunished abuse of prisoners. This escalated on the 28th February 1936, where food shortages in the overcrowded Fort-Albert Prison caused unrest amongst the prisoners, leading to several prisoners demanding they be given some of the guards' rations. The guards responded by calling them "insolent Gaullois swine who deserved the pain (they) are suffering" and beating them, triggering a violent uproar where the onlooking prisoners charged the guards. They proceeded to fire their weapons into the crowd, successfully suppressing the riot, but not before 68 prisoners had been killed, and another 43 wounded (38 of these wounded later died due to infection of their untreated wounds). None of the guards sustained any serious injuries.

Word of the shooting soon spread from the prison to its attached town, Redoute, where informants of the Falaise Gaullois Resistance (RGF) relayed the information to the GMS. Baptiste announced the news in a public speech the next day, declaring that "we will deliver justice to the innocent victims of this Bahiaux crime against humanity." On the 4th March, 3 ships of the Sanslumièran Navy, the NdS Découverte, NdS Unité and NdS Avenard (all pre-Great War cruisers of Gaullica's Sanslumière Squadron), broke from their blockade positions and anchored off the coast of Monpain. The next day, at 05:00 am, they opened fire on the city, firing indiscriminately at both strategic and civilian targets continuously for 68 minutes (1 minute for each confirmed death at the massacre). The resulting devastation saw the complete destruction of Monpain's port and several manors, including the Manoir Dauphinais, which had been appropriated from its Gaullois owners for use as the RLF's government building, and an estimated 389 dead (and an additional 643 injured). The exchange of atrocities served to increase the hostility between both sides, resulting in more drastic anti-guerrilla tactics, and has been described by historians as the "bloodiest week in Sanslumièran history."

Escalation of the Sanslumière Campaign and the "Pure Monpain" Movement

Following the Shelling of Monpain, the GMS deployed most of its reserve forces in anticipation of a retaliatory strike, which manifested itself as the Battle of Pont-du-Charles. The battle began as a spat between a military police officer and a Bahiaux local, who was declaring that the Gaullois should "go back to Euclea". When the officer threatened to arrest the man if he did not be quiet and move along, the man revealed a concealed pistol, shooting the officer and triggering a small gunfight. Upon hearing of the gunfight, both guerrillas and army soldiers began to rush to the small village, escalating the small gunfight into a full skirmish that involved several hundred combatants on either side, marking the first real battle of the war. 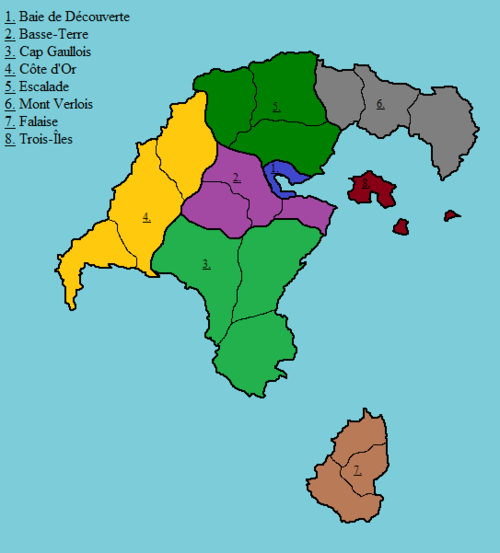 Islands of Sanslumière, and their provinces.

Retrieved from "https://iiwiki.us/mediawiki/index.php?title=Sanslumière&oldid=296738"
Categories:
Hidden categories:
This page was last edited on 8 January 2021, at 17:41.
Privacy policy
About IIWiki
Disclaimers