Eldmark has a developed, industrialized economy with a relatively high GDP. It has a low population density and a medium to high income gap. It's capital, Hammarvik, is consistently ranked as one of the healthiest cities in Asteria Superior, featuring a population of 3.5 million people. It is historically one of the oldest continually inhabited settlements in Eldmark founded by settlers and is home to the largest port in the country. Other urban areas include Åndalvern, Kvällholm, and Grönsund.

The name "Eldmark" is one that was chosen by Ostisk Ordennyan settlers as they landed at the Horn of Asteria, on the place that would soon become the city of Hammarvik. Eldmark roughly translates into "Fire Land," and was named as such due to its higher temperatures and arid interior.

The history of Eldmark dates back to 5000-7500 BCE migratory hunter gatherer societies of the Native Asterians, who would settle in the Bsuazzahr, or the Squirrel Valley, to form an ancient civilization. It is assumed that this group, which called themselves the Yetzdao, came from the east, and is ultimately an offshoot of the Zapoya people. 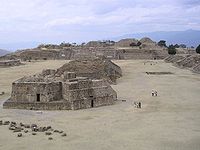 These people would form a de facto state refereed to by scholars as the Yetzdao Confederation. Based around the capital of Bêjlyixhe, the Yetzdao would have a devolved state, where the chieftains of each tribe and family would convene for inter-tribal affairs, including defense and trade. During the time of the Yetzdao Confederation, ritual sacrifice was common, crops, livestock, and on occasion, humans were decapitated and burned for Xnà’, which was seen as the goddess of the harvest. Other deities were Yitwize, the god of the Dead, and Yaje, the god of the Sky. These three gods were at eternal conflict with each other in Yetzdao scripture, whose conflicts manifested in plagues, droughts, or floods. Every event was viewed through the lens of the conflict these three deities would undergo. Because of this, conflict and war was a central tenet of Yetzdao, with the shaman-chieftains also acting as warlords.

The Ngulhtú Period, otherwise known as the period between [DATE] and [DATE], was marked with rapid expansion of the Yetzdao people under the reign of the Ngulthú, a collective of priests of Xnà’, who outlawed worship of all other gods, stating instead that any other god or goddess was in fact a personification of Xnà’ herself. This state, which is known as the Ngulhtú Empire, made significant gains in territorial allocation, conquering the entirety of the Horn of Asteria and the surrounding tribes, either killing or influencing warlords. The empire sent out several expeditions to various locations, including the modern day island of Vanö, where they came in contact with the Yamuya. Over a period of several hundred years, the Ngulhtú Empire's farming practices, coupled with a slowly shifting climate, caused vast portions of the interior of the Asterian Horn to become desert-like, and droughts forced the Ngulhtú closer to the coast. This led to a breakdown of order, leading to various Yetzdao to war over the remains of the empire. 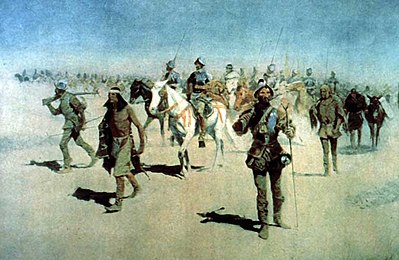 The Nygaard Expedition into the interior of Eldmark, 1632

In [DATE], the explorer and Ordennyan naval officer Hans Hammar Adelström was commissioned by [RULER] of The United Kingdom of Ordennya to counter the claims of other Euclean nations in the Asterias by building a port at the Horn of Asteria. A man of noble birth, Adelström was the second son of his father, and was not entitled to the sizeable Adelström Estate in Ordennya. Therefore, Hans saw the expedition as a chance to "carve out an estate of his own," as written in his journal. In [DATE], Adelstrom and an Ordennyan expeditionary force landed at the Horn of Asteria, between the islands and the mainland. Initially coming into contact with various Yamuya and Yetzdao peoples along the Horn of Asteria, they would at first secure territory from these groups by treaty, but this era of peace would not last. As the colony began to grow, in [DATE], Hans Hammar Adelström would lead an army of 1000 volunteers, mostly Ostisk Ordennyan settlers, to remove natives from their lands, under promise that the land would be divided among them. Extremely successful, Hans Hammar Adelström declared himself leader of the colony and the growing settlement port, which was also named Hammarvik after him.

The War of Eldmarkian Secession 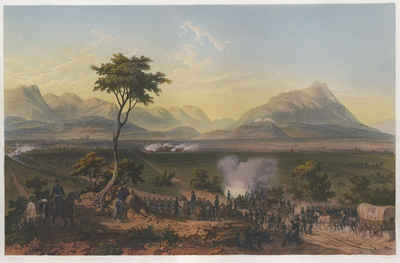 The Attack on Hakonsbruka, a Republican town, 1850

Surrender of Chief Byshwae as depicted on the front of the 1 Krona bill, 1879

Karl I and the Great War 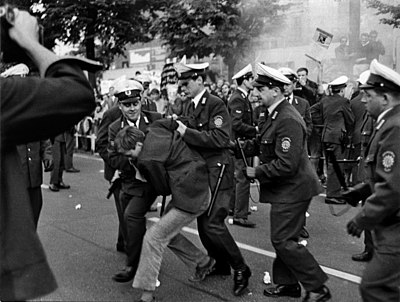 Communist riots in Hammarvik in 1963, leading Elianora I and the Eldmarkian Armed Forces to declare Martial Law.

Eldmark is the 5th largest country in Asteria Superior with a total size of 1,614,037 square kilometres.

Retrieved from "https://iiwiki.us/mediawiki/index.php?title=Eldmark&oldid=153229"
Categories:
Hidden categories:
This page was last edited on 13 January 2020, at 18:29.
Privacy policy
About IIWiki
Disclaimers