Scalizagasti, officially known as the Republic of Scalizagasti, is a nation located on the continent of Huitztlanecuilt in the Great Experiment. It shares a border with Samoria, Texcolga, and Hapria to the north, borders Nishfund to the west, and borders neutral territory elsewhere.

The Kingdom of Scalopya was founded by King Taejo the Great in 802. The kingdom, named after the Scalopyan tribal confederation, would last until its collapse in the 13th century. The numerous tribes and kingdoms from the classical era were unified under one banner, and the resulting stability led to a golden age for Scalopyan society. There were many great advancements into science, literature, the arts, religion, and culture.

The period following the collapse of the Kingdom of Scalopya is known as the Three Kingdoms Period. The Kingdoms of Satawento, Jurein, and Hesmaron were rivals of similar strength and size, constantly competing for dominance over land and vassal states. Some independent states also existed in this era, including the Kingdom of Liahuan and the Maldati Confederation.

King Valéry III, the ruler of Satawento, was an ambitious ruler who sought the recreation of Scalopya which had fallen five centuries before his birth. While other leaders from the Three Kingdoms Period had attempted similar feats, the balance of power in the region made conquest of any of the great kingdoms nearly impossible. In 1760, the Ten Weeks' War saw a decisive victoy for Satawento over Hesmaron. The Mountain War broke out the following year after King Theomenic of Hapria annexed the duchies of Answel and Pretezzo, which resulted in another victory for Satawento in the Treaty of Nems. 1762 saw an irregular force of Scalopyan Irredentists openly rebel against Jurein. While Satawento did not intervene in the conflict, Valéry gave materiel aid to the rebels in secret, befriending the leader of the rebellion. Sal Huva was annexed the same year. In Hesmaron, the royal House of Yabmana was overthrown by Overn Fneifjop as a result of widespread discontent over the humilating loss to Satawento. The newly-crowned King Overn declared war against Satawento; the Preservation War would end in August 1766 with the complete takeover of Hesmaron with the assistance of Liahuan. The Irredentist rebels would finally fight alongside Satawentan soldiers in the War of 1767 against the triple alliance of Jurein, the Maldati Confederacy, and Atronia.

The Empire of Scalizagasti was officially proclaimed on 5 June 1767 during the resulting Treaty of Butimi, where Valéry of Satawento was named Emperor of Scalizagasti.

During the imperial era, the Empire of Scalizagasti was ruled by the House of Zagaito. The imperial capital of Miakas in the province of Satawento served as the power base of the emperors. While the era did not see any territorial expansion for Scalizagasti proper, the territory of Milynia was colonized in 1790 under Emperor Pascal II and continues to be a territory of Scalizagasti to this day. One major project of the imperial government was Scalizagasation, the recreation of a unified cultural identity similar to that of Scalopya. This included the creation of an entirely new language (Standardized Scalizi), the assimilation of Jureiners and Hesmaronians, and the development of a new nationalism.

The Empire began to decline in the 19th century as corruption and authoritarianism became more prevalent. As the country industrialized, workers and the small-but-growing middle class began to advocate for more economic, political, and social freedom. While the Juarho Era saw liberal reforms and the expansion of the imperial parliament, many of those reforms were reversed by Emperor Juarho's successor. Tension between the citizenry and the imperial government would culminate in the 1840-1841 Scalizagastian Revolution, where the monarchy was deposed and replaced by a democratic republic.

The Scalizagastian Parliament is the unicameral legislature of Scalizagasti. The Parliament has 516 seats which are elected every four years with an open list proportional electoral system in multi-member districts. As of 2021, there are 52 electoral districts which range from 5 to 19 seats.

Prior to the Scalizagastian Revolution, Scalizagasti was a monarchy with very limited democratic representation. During the times of the Empire, Scalizagasti had a bicameral legislature with the lower Imperial Assemby and upper Imperial Senate. The Imperial Chancellor was the head of government and acted like the modern Prime Minister, but had little de facto power as the monarch had complete veto powers and could dismiss the government at any time.

The Revolutionary Republican Party is the oldest active political party in Scalizagasti. Due to its role in the Scalizagastian Revolution and founding of the Republic, it enjoys widespread popular support during elections. Because it commonly forms government, the party is sometimes referred to as Scalizagasti's "natural governing party." In the 20th century the RRP formed government for over 70 years.

There are three main political blocs in Scalizagastian politics. Historically, the big-tent RRP occupies the centre of the political spectrum, also including voters and politicians from the centre-left and centre-right. The left wing is led by the Social Democratic Party which has formed seven governments since 1912. Recently, the Greens have also emerged as a signficant force in the Scalizagastian left, forming Official Opposition in 2012. The right wing is represented by the New Scalizagasti Party (which formed government in 2008 and 2012) and the Liberal-Conservative Alliance (which formed government in 2005). The Aulden Democratic Party was historically the largest centre-right party, but declined during the 1970s and 1980s and currently has a rump caucus of 5 seats.

As of the 2020 election, the Social Democratic Party led by Sarah Millard governs Scalizagasti with support from the Greens. The next election is scheduled for 9 August 2024. 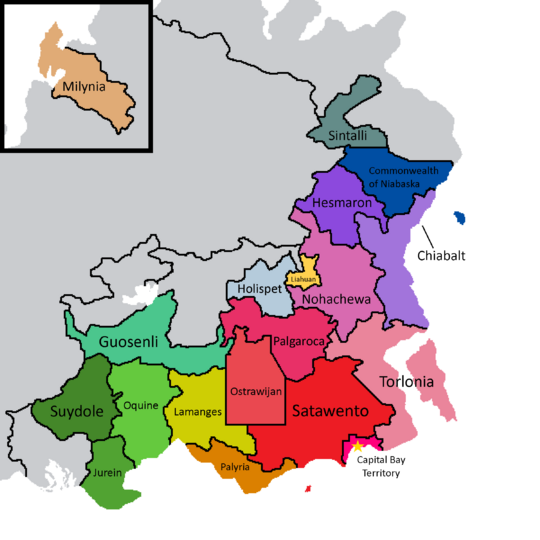 Political map of Scalizagasti showing its 17 provinces and 2 territories

Scalizagasti is a federation comprised of seventeen provinces and two territories. As part of a federal system, the provinces are largely autonomous with respect to their internal organization. Provinces derive their power from the Constitution of Scalizagasti, and control aspects like healthcare and education. Likewise, the federal government is in charge of other aspects of government such as foreign affairs and banking. Territories, meanwhile, derive their power from the federal legislature and their status can be changed by Parliament. The issue of jurisdiction is vitally important to Scalizagastian democracy, and there have been numerous legal cases regarding it.

Scalizagasti maintains warm relations with its neighbours as part of the East Huitztlanecuilt Association of Nations (EHAN), which includes Hapria and Texcolga. It was founded in 1956, seven years after the end of the Second Scalizi-Haprian War to prevent outbreak of another war in the region. As a middle power, Scalizagasti cooperates with all of its neighbours and nearby countries.

Scalizagasti is not a member of the Ussestelhke Alliance (UA) but maintains relations with its members. Scalizagasti's military participates in peacekeeping operations, including alongside UA military operations. During the Nightcrestian crisis, UA and Lavorean forces were supported with Scalizagastian volunteers and peacekeepers.

Retrieved from "https://iiwiki.us/mediawiki/index.php?title=Scalizagasti&oldid=341744"
Categories:
Hidden category:
This page was last edited on 28 April 2021, at 05:09.
Privacy policy
About IIWiki
Disclaimers