Shalum, officially the Empire of Shalum, is a empire is a sovereign state located in northern Tyran. It is made up of eight constituent states, and covers an area of 1,292,620 square kilometers (499,083 sq mi) with a largely temperate seasonal climate. Its capital and largest city is Aragon, with a population of just over eighteen-million people. In total, the Empire of Shalum has a population of 110,859,259 people as of the last national census.

The Empire of Shalum is a unitary state governed by the: Imperator of Shalum, Prime minister, and Imperial Council made up of either members of the nobility, or individuals who have been hand-selected by the executive. The city of Aragon has acted as the seat of Shalumite government since the establishment of the Holland dynasty in the year 1549.

Historically, when diplomatic talks have broken down to the point that conflict is inevitable, the Imperial Armed Forces have played a key role in assuring the Empire's sovereignty from foreign powers. Numerous times, its forces have been called in to counter aggressive actions taken by its neighbors, especially Ossoria and Æþurheim whom the Empire is known to regularly come into conflict with. Following the heavy losses in terms of both manpower and equipment that it took during the course of Eracura's Great War, much of the service branches saw sweeping reformation measures in terms of doctrine and chain of command. A second-round followed much later in 1991 under the administration of Imperator Carl Holland, who was interested in expanding the military's offensive capabilities and armament.

Given its massive need for equipment, Shalum has a thriving defense industry which is primary based out of the Duchy of Hallefeld. Many manufactureres were originally asked to locate to that region, particulary around the capital city of Dresden, due to geographic insulation from external threats. The largest domestic producer of Imperial military equipment, Kaiserliche Defense Systems, maintain its national headquarters there. Due to a sereis of laws passed by Imperial Parliament in 2002, at least 51% of stock must remain in the hands of noble families or the Exchequer. The largest foreign supplier of Shalumite equipment is Wolf Armaments, which is based out of the allied Empire of Common Territories. An example of their cooperation was the joint development of the Honigdachs (IFV) which was brought into service in mid-2005. As of the year 2019, the Empire spends approximately 2.2% of its GDP on the military and research and development for it. 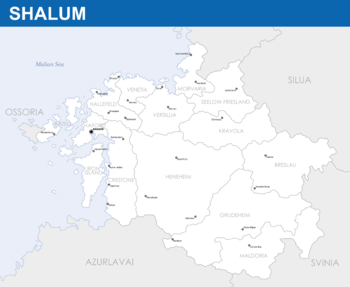