South Misai (Hananese: 南美西, Minamimisai) officially the Republic of Misai (Hananese: 美西共和国, Misai Kyōwakoku) is a nation in the Sea of Savai occupying the southern portion of the Misai Archipelago. It borders North Misai to the north and Savai to the south. Misai also shares a maritime border with Oshima. South Misai is a democratic constitutional republic. The capital city and the largest city of South Misai is Ebiwan. Despite only controling the southern portion of the Misai Archipelago, the Republic of Misai claims to be the legitimate and rightful government of the entirety of the archipelago.

The Misai archipelago was inhabited by various people groups prior to the arrival of the Hananese settlers in 1122. Hananese colonisation led to the creation of highly autonomous fiefdoms led by local daimyos. Eventually Misai would declare itself the indipendent Kingdom of Misai in 1437; however, disagreements between the northern and southern daimyos on the main island would lead to the division of the kingdom into north and south. It is largely during this period that Southern Misai came under Midrasian influence. The kingdom would be reunified in 1792 in the Rokuda Unification but would continue to be subjected to Asuran influence in the region.

Discontent towards daimyo rule and an increased public will for a democratic system led to the Ebiwan Revolution where the Republic of Misai was proclaimed which plunged Misai into a civil war. Fighting in the war quickly drew into a stalemate on the main island while the Republican Armed Forces consolidated its control over the southern islands. Due to the stalemate of the war, an armstice was called in 1924. Tensions between the north and south slowly declined as public sentiment in both countries turned against the hostile relations between north and south. This culminated in the creation of the Misai Council in 1944 where both sides began the process of deep integration. Today North and South Misai are two of the most well-inegrated countries in the world to the point that many view reunification as redundant.

Today South Misai is a part of various international organizations such as the Misai Council. South Misai is ranked very high in the Human Development Index and has one of the world's highest life expectancies at 83.6 years. South Misai is a developped country with a high-income economy. It is also a high preformer in a myriad of international listings of democracy, civil liberties and press freedoms. South Misainese citizens also receive free education, universal healthcare and some of the longest paid maternity leave in the world. Despite all this, South Misai is one of the most regionally unequal nations as the main island accounts for over 80% of South Misai's economy even though it is home to only around 67% of the population.

The Hananese name for Misai is 美西. The characters for beaty (美, bi) and west (西, nishi) are used for their compound reading of Misai. The meaning behind the characters used for Misai is therefore beautiful west referring to its location west of the island of Ōshima. The actual meaning behind Misai is unkown but some linguistists hypothise that it is a Hananised version of the Soifun name for the lower islands of the archipelago Isai'i.

Little remains of the aboriginal people groups in the northern portion of the Misai archipelago. Human habitation has been estimated to have been present on the archipelago since the Stone Age. Human remains that were thought to have originated from the Paleolithic Era were found in Inishiro in the late 1800s but were lost during shipment before this could be proven.

Due to the isolated geography of the southern islands, some native groups, the largest of which are the Soifun peoples, have survived in relatively isolated communities. The various aboriginal groups of southern Misai have been linked through linguistic and biological evidence to the larger immigration of seafaring peoples from Southeast Catai to Savai. According to Soifun oral tradition and history, fishermen and traders sailed up to the main island of Misai as well as Oshima on a regular basis.

The Misai archipelago was known by Hananese traders and fishermen for about two hundred years prior to any actual settlement. The first Hananese settlers arrived on the main island in 1122. The period between 1122 and the early 1200s is refered to as the first phase of colonisation. According to early literary sources, initial contact between the natives and the Hananese was peaceful, yet with an increase in the number of arriving settlers, ties between the two groups quickly soured. Aboriginal groups faced sharp decline due to disease and conflict with the ever-increasing number of settlers. These initial settlers were primarily fishermen and traders looking for economic opportunity on the islands. Due to the hostile ties bewteen the settlers and natives, the population of colonists had to arm itself alongside forming small groups of volunteer mercenaries.

The second phase of colonisation is considered to have taken place bewteen the early 1200s and 1390s. It is characterised by an increase in inland settlement and a considerably rapid establishment of farming communities on Misai. Accompanying this increase in the population of settlers on the island was the complete importation of the Hananese social order to the islands. Several minor nobles were granted the high status of daimyo in exchange for moving to these new territories and governing them on behalf of the emperor back on the mainland. The presence of these newly-appointed daimyo and the rule of law they brought with them displeased many early traders and fishermen who were no longer able to conduct business freely. The daimyo also brought with them significant numbers of retainers that eventually replaced the makeshift mercenary groups formed by early settlers. During this second phase of colonisation, mentions of native peoples on the main island cease which is credited to the creation of more professional warrior class.

The third and final phase of colonisation is considered to have taken place from the 1390s to the late 1500s. It is characterised by the settlement of the southern islands by Misainese settlers from the main island itself unlike the two prior phases where settlers largely came from the mainland. Also unlike the two prior phases, the third phase was largely started by the Daimyo on the main island wishing to increase their holdings size considerably in part to be able to afford yearly tributes to the mainland. Due to the more isolated geography of the southern islands, native groups were able to presist in the southern islands islands to the modern-day. Despite this, diseases brought by interactions with the main island greatly decreased their population. Due to limitations to the what jobs they could work and which areas they could live in, most natives in Misainese society had to work as low-skilled contractual labour most often on farms or as house laborers. Natives were treated as the lowest class in society. Eventually settlers and natives began to intermarry largely due to the fact that settlers to the southern islands were overwhelmingly male. This racially mixed class called the Jokujin was considered racially inferior to Hananese people but became a significant portion of the population in the southern islands. 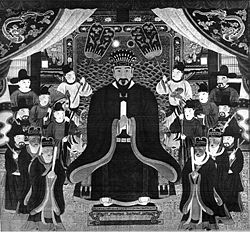 The first Great Daimyo of the Kingdom of Misai

Because of the distance between Misai and the mainland, the daimyo of Misai were able to rule relatively autonomously with actual mainland rule In 1437 the Daimyo X, the most influential daimyo of Misai, declared himself the Great Daimyo of the 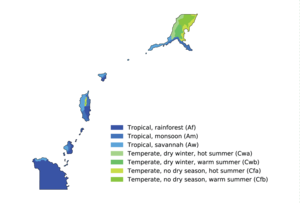 The South Misainese climate is largely divided into two: a tropical maritime climate which is the dominant climate type in South Misai and a temperate climate on the northern portion of the main island. Typhoons are common in South Misai reaching their peak in July, August and September. The northern temperate region experiences wider temperature changes in its climate than their southern tropical counterparts where such changes in temperature are noticeably lesser.

Misai is divided into five regions: Southern Misai, Yoshikageshima, Chūkanshima, Īsai and Equatorial Savai. Regions represent gradual cultural, dialectical and economic differences better than prefectures. They serve a supporting role facilitating cooperation between prefectures and the federal government. Each region has a separate regional assembly where prefectural governments send representatives with the exeption of Yoshikageshima the prefectural assembly of which fills the role of regional assembly as well because of its small size. Due to the high degree of autonomy prefectures and municipalities enjoy in South Misai, regional governments are mostly in charge of coordinating healthcare services as well as monitoring agricultural and environmental policies and laws.

Regional differences in South Misai are extremely stark. Two-thirds of the nation's population and 80% of its economy are represented by only one of there regions: Southern Misai. Historically the treatment of the soutern islands has been mired in colonialism where their econmies were heavily based on the extraction of labour and resources to the main island. The southern islands are also more ethnically diverse than their northern counterpart with both native and immigrant communities making up a substantial portion of the populations. In recent years, the central government of South Misai has attempted several economic stimulus plans to revitalize the southern economy. These policies have worked in most regions except for Equatorial Savai where economic problems continue.

The Republic of Misai is a unitary constitutional republic with the president as the head of state and the premier as head of government. Highest political power in South Misai resides in the democratically-elected unicameral legislature, the Grand Diet (Hanasenese: 大議会, Dai Gikai).

The President of the Republic of Misai (Hanasenese: 美西共和国大統領, Misai Kyōwakoku Daitōryō) is largely a symbolic role but it still retains some appointive powers as well as power over foreign policy however, even this is shared with the Misai Council. The presidency is officially defined as the head of state of the Republic of Misai as well as the head of the Republican Armed Forces in the constitution. Over most of its history, South Misai had a semi-presidential system but in recent decades the powers of the president have been diminished significantly. The current sitting president of South Misai, Ai Obama is the first democratically-elected disabled head of state as she has cerebral palsy and is paralysed from her neck down but retains the use of her right hand.

Judicial power in South Misai resides in the Misai Supreme Court (Hanasenese: 美西最高裁判所, Misai Saikōsaibansho), a supranational organ that fills the role of highest judicial authority in borth North and South Misai. Unlike in some other countries, the Misai Supreme Court is an apolitical institution. A member of the Supreme Administrative Court can serve their an indefinite term, yet most members choose to retire after a de facto term of 20 years. Its membership is formed from a total of 12 judges refered to as High Justices that are equally appointed by each of the two countries.

Retrieved from "https://iiwiki.us/mediawiki/index.php?title=South_Misai&oldid=195146"
Hidden categories:
This page was last edited on 23 April 2020, at 06:58.
Privacy policy
About IIWiki
Disclaimers