The oldest recorded civilization in Viltis was the Tumodii culture from the 4rth millenium to the subjugation of the island by the Palatinate in 20 BCE. Viltis was the last bastion of the culture, home to what the Palatins called the Odii Kingdoms; the last sovereign city-states of their civilization after the conquest of their mainland counterparts in 400 BCE by the city of Tula Prima. After the fall of the Palatinate, it will become part of the Kingdom of Nameria and then be one of the provinces of the Namerian Empire after its proclamation in 1202 CE. in 1870, during the Namerian Civil War, the Provincial authorities of Viltis decided to call the Caconziche Karazawi for help and protection. In 1875 both the Viltis Assembly and the Diet of Karazawa sign the treaty of annexation of Viltis which becomes a Karazawi Suiyuu the 26th of August of the same year.

The official language of Viltis is Azawarecha, with Ö’ode as a recognized regional language, taught in primary school and with its own bilingual traffic signs. But culturally, the island was deeply influenced by the Palatinate and even if it has kept a very local identity, it is considered part of the Romance world. 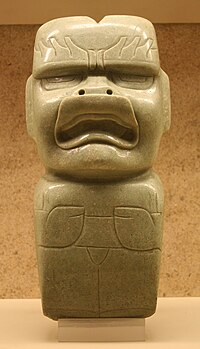 Colonization by humans happened during the last ice age. These neolithic cultures utilised ground stone and shell tools and ornaments and lived a subsistence lifestyle based on fishing, hunting and collecting wild plants. It's around 1500 BC that agriculture arrived on the island. Sedentary settlements appeared and, shortly thereafter, megalithic construction marking religious sites. All of the artefacts left on the island from that period allow archeologists to say that the island was either integrated, subjugated, or colonized by the Tumodii culture that had appeared around a millenium ago on the mainland. Settlements were typical of that culture, being mostly religious and political site, but also castles in time of war, in which the population does not live all year round, only gathering during festivities, market days, political gatherings, or sieges. Religious practices seems to have revolved around the cult of the Werejaguar, and the island was already producing resines and latex, products that still makes the reputation of Viltis in modern days. Their diet was mainly made up of fruits and vegetables early on, but corn became increasingly important, following in that the dietetic evolution of the mainland. Despite the wide range of hunting and fishing available, midden surveys in San Lorenzo have found that the domesticated dog was the single most plentiful source of animal protein.

This period lasted 1100 years and was the last "free" part of the Tumodii world, up until the various polities were attacked and defeated by Tula Prima, a continental hegemon in what is modern day Nameria.

The island's many cities would remain autonomous and keep their culture mostly intact, but had to pay tribute and help Tula in its war, notably serving as sailors. Tula's influence can nonetheless be felt, even if it itself takes great inspiration from the Tumodii. Tula's logograms became the new writing system, religious artefacts representing were-jaguar and transformatives figurines slowly became less and less common, while new stone works would represent religious leaders and chieftains in Tulaic clothings, rather than in costumes native to the island like their predecessors.

The population continued to grow, until the island was almost completely urbanized and/or transformed by human activities. Even so, wars continued to shake the various politicies, but now with the ever watchful eye of Tula Prima on them, ready to jump in to calm the situation if it became too heated and threatening to internationale trade, as the rubber, latex, and other resines or oil produced by the islanders was in high-demand on the mainland, and part of the tributes they had to pay to their hegemon. Like during the previous period, human sacrifices remained common, and so were ballgames, even if the exact rules changed depending on the settlements and eras. Tula's influence over Viltis would come to an abrupt end in 100 BC, when the hegemon-city was conquered by the Latins of the Palatinate. The islands city-states, now independent, became known as the Odii Kingdoms, surviving the fall of their protector for another eighty years until the Palatinate became the new master of the island in 20 BC after a decade long period of conflicts.

At first very light, the Palatinate's hold over the island increased with time. While at first content to let the Odii kingdoms be, the Senate ended up agreeing to the installation of permanent garrisons on the island in 4 BCE, alongside deblocking the credits needed for the construction of a military port as to secure the island's role as a springboard toward the increasingly threatening Tula Secunda. As a result, the island's cities became less and less free to do as they pleased, with strict taxes and production quotas imposed on them. This led to a general revolt in 2 CE, which was harshly repressed, with an estimated third of the island either killed or deported. in 5 CE, Port-Palatin became its own colony, with a population of mostly Latins settlers, and Viltis was given its own Proconsul.

Latins colons and Ö'ode would keep a very tense relationship, with the later considering that the former encroached on their agricultural lands. The goal of the Palatinate was to, through this colonization process, ensure a source of more servile sailors and soldiers to main its Claudian Fleet and to protect its military installations in the area against raids from pirates and privateers loyal to Tula Secunda. A second revolt happened in 29 CE, once again harshly repressed, and another in 37 CE. In 41, the tributary kingdoms were officialy disbanded by the Palatinate, and all the island was put under the Proconsul's authority.

for half a century, only Port-Palatin had the privilege of citizenship, while the ten Odii cities remained Peregrinus up until 88 CE, when citizenship was expanded to the entire island. From there on, Viltis would remain a peaceful province, continuing to produce latex, fruits... waterproof textiles from Veltis were especially sought after, alongside its tight air-sealed amphoras, ensuring a decent stream of revenues to the Odii cities such as Numascus, even if most of the island's economy was centered around Port-Palatin and also, later, Port-Peregrin. However, because of its situation at the "border" of the Palatinate, this strong economy made them a potential prey for pirates and invaders. After the complete annexation of the island, Viltis was the headquarter of the Claudian Fleet, tasked with dealing with piracy and potential naval invasions in its water. This also proved to be a vector of latinization for the island, as Odii people would come and serve in the navy, and those who had distinguished themselves or had become officers would return after their service with the privilege of Citizenship.

Saturnism would become popular on the island rather quickly, especially among workers at the docks and sailors. The remnants of the werejaguars cult, already greatly weakened by the Palatine occupation and rule, were integrated and ultimately diluted into the Saturnist practices. By the 4rth century CE, no trace of polytheist belief is left in Viltis, even in cities faraway from the coast like Numascus. However, later addition to Saturnism, like the Reaper, won't be popular in Viltis until the 12th or 13th centuries, as this figure originally did not interest sailors and traders, which also explain how Viltis would never be a stronghold of Red Banners movements.

Traditionaly socialist and liberal, the Suiyuu had been temporarily dominated by Royalists during the 80s and early 90s. Since then a local coalition between the Royalists of the Angaxurhiniri Caconziche and the liberal Kexi Chukurhicha have been a strong force of opposition against the Pichpiricha Juramchukuni who have regained their position as the majority party since the late 90s. They control all the non-coastal Wanru (eg : counties), with the notable exception of the Wanru Odema, which is a bastion of the social liberal Pentasindaricha Party.

The coastal area however, is much more conservative, with old cities like Port-Peregrin, Port-Palatin, and Port-Claude having either a liberal or royalist majority. A notable exception to this rule is the Suiyuu's capital, Yutarne, which is ruled by a Pichpiricha - Pentasindaricha coalition since the early 2000s.

The Economy of Viltis is based on four pillars : the rubber, agricultural, fishing, and textile industries. Since prehistoric time, the island was famed for its rubber and products derived from this ressource. Example include the Viltese fabric, a textile made waterproof by the application of rubber and latex. Similarily, through a process not unlike Vulcanization, Vilteses people were able to create single-piece waterproof shoes in high demand with sailors and marine officers.

While these traditional sectors remain, most of the rubber produced in large plantation-like Latifondes is exported either to the Karazawi mainland or directly to the internationale market. The Suiyuu of Tamoncha notably is home to large rubber sector, transforming both natural and synthetic rubber into automobile tires, stretching bands, and many other kind of products.

The clothing industry remain one of the main employer of the island with two major companies : Aroues Lux and Costecotton, the later famous for its waterproof items especially sought after by sailors and fishermen, while the former has been originally a manufacturer of sailor caps, underwears, and other clothing items, but has since the 90s diversified its products to catter to a larger population. The demand of these two companies make Viltis a net importer of cotton and other raw materials to be treated in its factories into the famed Viltese fabric, balists, moleskin and many other cloths.

Vilteses Latifondes also produce tobacco and Sugarcane. These can be transformed or refined directly on the island, with Karazawi cigarettes and cigars manufacturers having factories in Viltis, but the production is generally exported raw directly to the internationale market. citrus fruits and sweet oranges are also grown in latifondes to meet the sailors' important demand for these fruits since antiquity. As a result, candied and canned fruits are also manufactured on the island since the 19th century.

Retrieved from "https://iiwiki.us/mediawiki/index.php?title=Suiyuu_Viltis&oldid=77772"
Categories:
Hidden category:
This page was last edited on 11 June 2019, at 12:01.
Privacy policy
About IIWiki
Disclaimers