Transcandar formally the State of Transcandar (Altgöl: Çandaröte Qirollik [tʃandaʁɒt qirolic]) is a central cataianese nation situated in the river valleys south of the Transcander mountain range. It lays on the northern bank of the Gulf of Brassida. Sinop is the seat of the capital and to the heads of the clergy, while Kastamonu is the largest city and main cultural and commercial centre, often acting as a secular centre. Approximately 70-80% of the country's citizens identify themselves as ethnic Transcandarians. Carackids are the largest minority at roughly 8% of the population while other minorities include Goulongese, the Xhentsu and Ömnöduul.

The Transcandarian State originated in the early 11th century when local tribes of the Turuk Khaganate ceased their nomadic life in the in the plains and steppes, crossing the Transcandar Mountains deciding to make the pastures south their homeland starting the process of assimilation by the nomads. The tribes and leaders of the Transcander fought with their neighbors for nominal control of the country for centuries to come, alternating between outright independence and submission as vassals to more powerful regional rulers and Khaganate Hordes. The Transcander people have long valued the importance of outside trade. The largest city Kastamonu was constructed by foreign merchants seeking trading routes with the far east, in return for trading in the Transcandar, Celâleddin Candar sought foreign weapons to modernize the Transcandar Army and eventually lead them to establish themselves permanently free from the surrounding hordes seeking their tribute and subjugation.

The word Transcandar (Altgöl: Çandaröte) comes from the local name of the large Transcandar Mountains that physically divide it's northern borders with it's neighbors. The name started to become widely associated with the lowlands south of the mountains when tribes of the Ötüken Khaganate migrated over the mountains and settled in the fertile regions of it's foothills.

What could be considered the first proto-state or predecessor to the modern Transcandarian nation-state emerged as a result of the rising interactions and conflict of the various city states in the Altgol Valley and the nomadic Chormaqan Xhentsu peoples of the east. Around the turn of the century the region endured what is now known as the millennium plague. A devastating combination of poor harvest, famine and disease that thoroughly caused a depression that eroded the authority of the powerful urban princes and mayors that ruled the Altgol. This loosening of local authority of the fractured princes made non-walled villages and cities prime prey to marauding bandits and nomadic hordes. It is during this chaos that a young disenfranchised noble; Atakhan the Elder, son of an unknown Altgol prince, and raised bv the Chormaqan, seized the opportunity and began in 1071, a conquest of the whole Altgol plains valley founding the Atakhanid Dyansty. With capitals first at İznik and then at Sinop, the Atakhanid Dynasty reached the height of its power during the late 12th and early 13th century, when it succeeded in taking key ports along the Brassidan coast. In the east, the Beylik absorbed other Transcandarian states and reached the Boihon region of Yidao. Trade from Ohen and Western Catai across Transcandar was developed by a system of caravanserai. Especially strong trade ties with Asurian city-states formed during this period.

During Körmükçü Çandar's reign, Western science, technology, and educational methods were introduced into Transcandar and the country's modernization was begun. Körmükçü Çandar tried to exploit the mutual distrust between Midrasia and Ternca to preserve Transcandar's independence,

At that time, Transcandar was nearly bankrupt. During the next two and a half years Celâleddin Çandar initiated important reforms in virtually all sectors of society. Government expenditure was slashed, and a distinction was made between the private and public purses. The instruments of central administration were overhauled, and Celâleddin Çandar assumed responsibility for all areas of the bureaucracy. Foreign interference in Transcandar's domestic affairs was curtailed, and foreign trade was encouraged. Public works such as the bazaar in Sinop were undertaken.

The State of Transcandar is divided into eleven states and two special administrative cities. The capital Sinop is located in Altgöl.

Transcandar is a Central-Catainese nation divided from it's northern and eastern neighours by the extensive Transcandar mountain range system which feeds the major river systems that run down to south of the country. Transcandar can be generally divided into three regions; south, north and east. South being the heartland of the country, extensive watershed provides large fertile plains between the rivers that run down to the coast. In the north, the fertile plains of the north form into large rolling steppes that make their way up to the İznik valley which stands as the entrance through the Transcandar mountains. However in the east, the environment becomes a cold landscape of high mountains and few valley paths. 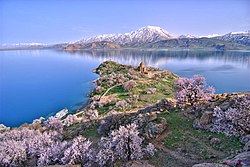 A photograph of Lake Kırşehir. Kırşehir is the largest lake in the country and is located south of İznik. 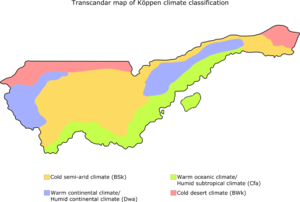 Transcandar has a variable climate. In the northeast, winters are cold with heavy snowfall and subfreezing temperatures during December and January. Spring and fall are relatively mild, while summers are dry and hot. The Transcandarian Brassidan coast receives the greatest amount of precipitation and is the only region of Transcandar that receives high precipitation throughout the year. The eastern part of that coast averages 2,200 millimetres (87 in) annually which is the highest precipitation in the country.

Mountains close to the north prevent desert influences from extending inland, giving the central plateau of the interior of Transcandar a continental climate with sharply contrasting seasons.

Winters on the eastern part of Transcandar in Ömnöduul region are especially severe. Temperatures of −30 to −40 °C (−22 to −40 °F) can occur in north-eastern Ömnöduul. Snow may remain at least 120 days of the year. In the west, winter temperatures average below 1 °C (34 °F). Summers are hot and dry, with temperatures often above 30 °C (86 °F) in the day. Annual precipitation averages about 400 millimetres (16 inches), with actual amounts determined by elevation.

the political system of Transcandar as set by the 1922 Constitution take place in a framework that officially combines elements of theocracy and parliamentary democracy. The constitution and it's 1951 amendment define the political, economic, and social order of the State of Transcandar. Transcandar has a democratically elected Prime-minister, parliament, an Ecclesiastic Council which appoints the Ruhiy Ota (Spiritual Leader) and maintains the religious order of the nation.

Transcandar attempts to maintain warm relations with many of it's neighbors and states in comes in contact with. 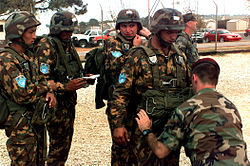 The military is composed of four branches, all of which carry the prefix Çandaröte (Transcandar):

Every fit Transcandarian citizen otherwise not barred is encouraged to serve in the military for a period ranging from three weeks to a year, dependent on education and job location. However benefits are given to people who plan on a career in the military. Transcandar did not recognize conscientious objection until 2007 in the case of conscription. Admiral Armağan Arıcan is the current Commander of the Transcandarian Armed Forces.

File:TRA 1000 LIRA.png
Old Transcandarian Lira minted during a period of hyper-inflation in the country during the late 90's

Economic activity in Transcandar has traditionally been based on herding and agriculture, although development of extensive mineral deposits of copper, iron, molybdenum, tin, tungsten, and gold have emerged as a driver of industrial production. It has a market economy, a moderate GDP per capita, and a relatively low rate of poverty. The Transcandarian Lire (₺) is the nations currency.

Transcandar has an estimated population in 2018 of 13.762 million inhabitants, nearly three-quarters of whom lived in towns and cities. According to 2010 estimates, the population is increasing by 1.1 percent each year. Transcandar has an average population density of 6.49 people per km². People within the 15–64 age group constitute 71.4 percent of the total population; the 0–14 age group corresponds to 25.3 percent; while senior citizens aged 65 years or older make up 7.3 percent.

hThe ethnic composition of the population according to the 2009 population census: 77% Altgol, 20% Ömnöduul and 3% Xentsu.

The official language is the Altgöl (Türük language), which is spoken by approximately 92% of the population as a mother tongue. It belongs to the Türük language family. Midrasian plays significant roles as second or third languages of education and communication.

The culture of modern Transcandar has developed to what it is as a result of centuries of cultural mixing between Volghari, Indiginous Transcandarians and Asuran merchants. Today, national traditions are well preserved in the country despite Western influences, including globalized consumer culture. Some of the main elements of the Transcandarian culture are: music, literature, folk dances and art, cuisine, architecture, cinematography, horsemanship and seamanship. Transcandarian culture is a product of efforts to be a "modern western" state, while maintaining traditional religious and historical values.

Two Musician Girls by Osman Pasha, at the Pera Museum.

Carpet weaving represents a traditional art. During its history, the art form of the woven carpet has integrated different cultural traditions through endemic and syncretic developments. Traces of Asuran design can be found in some earlier examples and more recent examples. Türük peoples migrating from Central-Catai, brought with them their traditional designs. Navdarism and the development of the religious styles art also influenced Transcandarian carpet design. The history of its designs, motifs and ornaments thus reflects the political and ethnic history and diversity of the area of Transcandar. 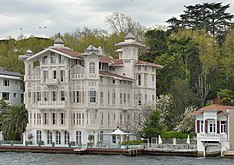 One of 620 historic waterfront houses along the shores of the Brassidan gulf. 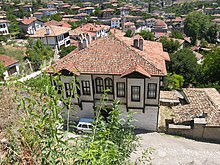 The traditional houses of Safranbolu.

Çandyol is the personification of the Transcandarian nation-state, depicted as a young woman with black or brown hair wearing nun's robes carrying a sword and bearing the Endless-knot. Since the rise of Transcandar into the modern period, Çandyol has been associated with the eternity of the Transcandarian people and defense of their faith.

Retrieved from "https://iiwiki.us/mediawiki/index.php?title=Transcandar&oldid=198449"
Categories:
Hidden categories:
This page was last edited on 29 April 2020, at 17:35.
Privacy policy
About IIWiki
Disclaimers