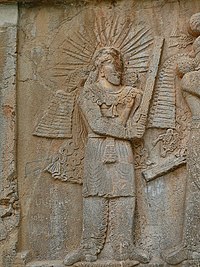 Late 7th-century relief of Nawdhar at the Temple of the Buzdah, the earliest known representation.

Navdarism (Pouremanian: Nawdhariyat), also known as Daena (Pouremanian: Daēnā) is the world's second-largest religion, and one of the world's oldest continuously practiced religions. Navdarism is a monistic faith, with elements of henotheism and atheism, centered on an eschatological cosmology dealing with self-salvation and spiritual liberation. It also encompasses a variety of traditions, beliefs and spiritual practices largely based on the original teachings of Nawdhar. It originated in ancient Poureman in the 11th century BCE, and, after a period of intense suppression, spreading through much of Sifhar, Arabekh, Majula, and Catai. Three major extant branches of Navdarism are generally recognized: Benayine (Pouremanian: lit. Seeing through the Mirror), Mehtaraina (Pouremanian: Order of the Elders), and Vasborya (Pouremanian: lit. Dancing on the Tower)

All Navdarist schools share the goal of overcoming the cycle of death and rebirth, through the processes of Béšekan (fracturing) and Bérav (renewal), though they differ on the specifics and rites performed. They also vary in their interpretation of the path to self-liberation, and importance and canonicity ascribed to the various Navdarist texts, and their specific teachings and practices. Widely observed practices include chanting the Gohavi, communal incantation, acts of penance and contrition, purging of razilats (vices, or sins), and cultivation of the Hoziri (virtues, or perfections)

Navdarism is believed to have began in the 11th century BCE as a sect of the Sed Khanewadh, the Hundred Schools of Belief. Despite intense persecution, Nawdhar and his followers were able to establish hidden and underground communities across Poumeran. It soon attracted temple dissidents and capitalised upon its message of salvation for all, not just the few. The fall of the Varasdatid in the 3rd century BCE saw the adoption of Navdarism as a state religion by several successor states. By the 8th century CE the Navdarist world extended from the western tip of Arabekh to the Chinghe river in Catai. The expansion of Navdarism involved the expansion of various polities such as the Tomyrisids, Sabirids, and the Tumenids, as well as through trade and conversion to Navdarism by missionary activities (hosn-e-niyyat).

The Climb Down by Vassilis Scafidakos

Base of the Babaraan by Iason Ganas

The avowal, or Govahi, is the basic creed of Navdarism that should be recited under oath with the specific statement:

The Govahi is not necessary for conversion to Navdarism, but it is an essential step for beginning one's journey into the Abyss. To become a Govahju, one who has recited the creed, it must be witnessed, and attested for, by a monk. It may be recited in any language, though for attestation it is expected to be recited in Liturgical Poumeranian 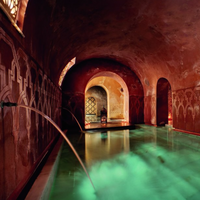 Ablution, known as Paludan, is both a necessary facet of Navdari life and one of its most sacred rituals. It is a process of ritual purification by which a person cleanses themselves of impurities. It is divided into two components, the Rayej (ordinary), and the Vizha (special). The Rayej Paludan, a partial wash involving washing the face, hands, and feet, is divided into the Ruzane (diurnal), and the Sabane (vespertine). The Ruzane is performed at dawn or noon, while the Sabane is at dusk or midnight. Barring a context that makes perfoming it impossible, it is compulsory for one ordinary ablution to be performed per day. The water used must have dwelt in light, either from the sun or moon, for an hour.

The Vizha Paludan is performed once every year, on the Rawaz Tashkar, and is commonly performed at holy pool inside a Navos. It is also performed for newborns three months after birth, and as a coming of age ceremony for girls at 12 and boys at 14. It is a full wash, involving complete submersion for five to ten seconds, and may be performed several times. The water used for the ceremony must include a drop from the Sefadaba Cave, and must have a source of constant natural light. It is compulsory to have performed it at least once. 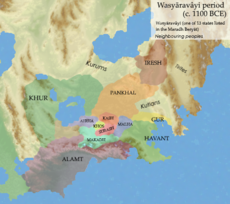 Retrieved from "https://iiwiki.us/mediawiki/index.php?title=Navdarism&oldid=184080"
Category:
This page was last edited on 1 April 2020, at 00:01.
Privacy policy
About IIWiki
Disclaimers