The Republic of Visoclesia (Visoclesian: Република Визоклесија), often simply referred to as Visoclesia, is a landlocked state in western Euclea. It is bordered to the west by Poliania and by Minilov to the east. With a total land area spanning NUMBER square metres, Visoclesia is the smallest state in west Euclea and one of the smallest in Euclea proper. It has a population of almost 4 million and is significantly less urbanised than many other Euclean states. The capital and largest city is Višnagrad on the coast of Lake Min.

Visoclesia was first settled in the Neolithic era and existed outside of the Great Vesimir despite its Marolevic population. Its central location meant that Visoclesia avoided the bulk of the Zalyk wars and was able to develop a distinctly Marolevic cultural identity. The Visoclesian Boyars established the first Visoclesian state in the tenth century, however, it was swiftly subsumed by its more powerful western neighbour. Visoclesia existed as a backwater for much of its history, remaining a part of Poliania while their epismalist faith separated them from a complete integration into the kingdom. With the reforms to the Episemialist faith in Narozalica, the Visoclesian church declared its independence and broke off patriarchal ties. Despite these cultural differences, it was not until the romantic era that the idea of a separate Visoclesian national identity was truly considered. Following the liberalisation of Polianian society in 1869 these sentiments were able to be expressed more openly, resulting in the "Renasansa" or "Visoclesian Renaissance", a wave of artistic expression in the search of a uniquely Visoclesian cultural identity in literature, music and visual art. During this time the Visoclesian People's Party was established, which represented Visoclesia within the Polianian parliament. With the rise of functionalism, Visoclesian cultural identity faced repression from the central government. During the great war, Visoclesian partisans fought on the side of Narozalica and with the defeat of Poliania, an independent Visoclesian state was established. While close ties with Narozalica were maintained at the start, fears of Narozalic cultural domination and authoritarianism coupled with liberalisation in Poliania led to Visoclesia aligning closer with its western neighbour and the EC.

Visoclesia is a democratic parliamentary republic, recognised by the Euclean Community for its commitment to democracy and open society. Its politics are dominated by the Visoclesian People's Party, a big tent agrarian party who were instrumental in the political independence of the country. The head of state is President Apostol Zlatarev, and head of government Prime Minister Stojan Kralevski. Legislative power is held by the National Assembly, a 100 member body. Visoclesia is a minor power internationally, due to its small size and landlocked location. It is a member of the ICD, CN, ITO and GIFA. 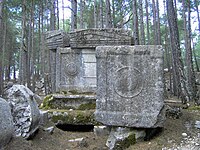 Pre-Marolevic Visoclesia was the home of the Armonic culture, a branch of the Priedan culture in Amathia. The Armonic culture arose during the Chalcolithic era, centralising on theocratic city states which followed the code of Zybithidism. This was at once a strict caste system and monotheistic religion centred around filial piety, and dominated most aspects of daily life. They spoke the Armonic language which is now extinct.

The largest of the Castipian city states was Rhamae, which reached its apopee in the 3rd century CE under the rule of Zilipuri. Rhamae became the hegemonic power over the other states, enforcing the creation of the Armonic League which united the Armonic states into a loose confederation. Under the league, Armonic culture grew and trade with the Tenic peoples north of Lake Min increased the wealth of the component states. Armonic military might also increased, with several wars being waged against the neighbouring Tenic peoples resulting in some territorial gains. Armonia would remain a relevant local power until the Marolevic migration.

From the fourth century CE, Marolevic tribes began to migrate from the north across western Euclea. Unlike earlier Marolevic raids, which sought simply to pillage and take slaves, these raids were the start of a major movement of population as the Marolevs moved southwest in search of new lands. The exact reasoning for this migration is not known, though there are several major theories revolving around famine or pressures from Weranic peoples. By the fifth century, Marolevic groups had begun to reach the borders of the Armonic League.

At first, these settlers were allowed to settle within the dominions of Lingos, in return for their military service in the Armonic armies. However, as their settlement grew the settled Marolevs revolted against Armonic control and soon overwhelmed the city of Lingos. This provoked the Armonic league, who attempted to mobilise their forces to repel the Marolevic threat. Despite winning several battles against the relatively unorganised Marolevic hordes, the Armonic League was deeply divided between its constituent cities. With the League's armies fighting in the south, several of the northern cities were sacked. The northern generals accused Alabria, the largest of the southern cities, of using the League's armies to defend themselves at the cost of the other Armonic cities, splitting their armies and returning home.

Now divided, the Armonic league was unable to defend itself against the seemingly never-ending attacks of the Marolevic tribes. In the sixth century, the final Armonic cities were defeated in a succession of battles. The Armonic people were successively assimilated into the Marolevic culture, with their culture leaving only slight traces within Visoclesia. The Armonic language disappeared around the eighth century, with Armonic influences being limited to art and some toponyms.

The Marolevic tribes settled into their new lands, establishing fortified towns known as Gords. These new settlements were ruled by a noble class known as the Boyars, rich landowners and mounted warriors, who arose from the warriors of the migratory tribes. Buouyed by trade and increased agricultural output, the Grods were able to form feudalistic states. In 730 CE the Principality of Garna was declared, with Prince Goran Kostov elected from amongst the city's boyars to lead the city. Garna, itself the first Marolevic settlement in Visoclesia, soon came to dominate a modest realm that covered the Visoc Forest all the way to Lake Min. While Goran would die just seven years later in a hunting accident, his descendants would succeed him and establish the Kostov Dynasty.

Garna remained independent from Great Vesimir, instead coming under the influence of the Empire of Arciluco initially before cutting loose to develop its own sovereignty. It was these ties with Arciluco which would result in the Principality's evangelisation in the tenth century under the ministry of Saint Teodor of Garna, an Arcilucan monk who was sent to the Garnish court in 907. Teodor would succeed in converting the Garnish monarch, Vasil Kostov, to Episemialism. Vasil would make Episemialism the state religion, spreading it by force across his dominion. This caused a peasant's revolt which threatened his rule, but the loosely organised and weakly armed peasants were no match for his armoured knights.

Towards the end of the tenth century, Garna's economic importance began to decline steadily in the face of the coastal port city of Višnagrad. Realising this, the Višnagradian boyars elected one of their own to the title of Prince and declared their independence, starting a war between the two cities. Despite Višnagrad's economic advantage, Garna still possessed the stronger army and began to push deep into Višnagradian territory. In 1011, realising that they were going to be defeated, the Višnagradian leaders sought help from Vesimir. With the aid of Vesimir, they were able to win the war. However, Vesimir simply forced Višnagrad into submission as well. Both Višnagrad and Garna became banates under the banner of Vesimir, ending Visoclesian independence for several centuries.

Retrieved from "https://iiwiki.us/mediawiki/index.php?title=Visoclesia&oldid=197375"
Hidden category:
This page was last edited on 27 April 2020, at 05:10.
Privacy policy
About IIWiki
Disclaimers