Zanarkand and the Besaid Islands

Zanarkand and the Besaid Islands (officially the Commonwealth of Zanarkand and commonly referred as Zanarkand) is an Oceanian country comprising the mainland of the Zanarkian continent, the island of Besaid, and numerous smaller islands. It is the world's sixth-largest country by total area. Neighbouring countries include New Guinea, and Timor to the north and New Akiba to the south-east.

For at least 40,000 years before the first Lucian settlement in the late 18th century, Zanarkand was inhabited by indigenous Zanarkians, who spoke languages grouped into roughly 250 language groups. After the Europan discovery of the continent by Erebonian explorers in 1606, Zanarkand's eastern half was claimed by Great Lucis in 1770 and initially settled through penal transportation to the colony of New South Niflheim from 26 January 1788. The population grew steadily in subsequent decades; the continent was explored and an additional five self-governing crown colonies were established. On 1 January 1901, the six colonies federated, forming the Commonwealth of Zanarkand. Since federation, Zanarkand has maintained a stable liberal democratic political system that functions as a federal parliamentary democracy and constitutional monarchy comprising six states and several territories. The population of 23.6 million is highly urbanised and heavily concentrated in the eastern states and on the coast.

In 1642, Erebonian Explorer, Grel Besad first gave the name of Zanarkand as New Erebonia, which was in use up until the late 18th Century. When it was discovered by Captain John Cook, he sailed south and gave the name New South Niflheim, a name which would be used for one of the 7 states. The term Zanarkand first came to be when Erik Flanders had just sailed from the Middle East. Upon completing his voyage of New Erebonia, he christened the name Zanarkand, which was taken from the Middle Eastern word of Samarqand, meaning Stone Fort, attributing to its vast rocky coastline.

From 1817, his journal, Voyages of Zanarkand was published and the name was publicized and eventually, the name Zanarkand came in to use and was said to be more pleasing to the ear.

Other names of Zanarkand have been: Australis, Land Down Under, Great Southern Land, Zack. 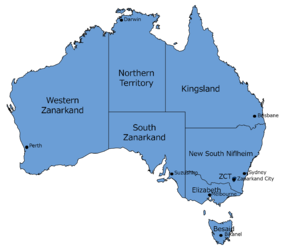 Zanarkand and its seven states

Zanarkand has six states—New South Niflheim (NSN), Kingsland (KLD), South Zanarkand (SZ), Besaid Island (BSD), Elizabeth (ELI) and Western Zanarkand (WA)—and one major territory— the Northern Territory (NT). The Zanarkand Metropolitan Capital is no longer considered to be a state but is rather under the classification of an independent Metropolitan Center In most respects these two territories function as states, except that the Commonwealth Parliament has the power to modify or repeal any legislation passed by the territory parliaments.

Retrieved from "https://iiwiki.us/mediawiki/index.php?title=Zanarkand_and_the_Besaid_Islands&oldid=213872"
Categories:
Hidden categories:
This page was last edited on 31 May 2020, at 14:32.
Privacy policy
About IIWiki
Disclaimers