New Akiba (Nihhonese: ニューアキバ) is an island country in the southwestern Pacificanna Ocean. The country geographically comprises two main landmasses—the North Island (北島 Kitajima), and the South Island (南島 Nantō)—and around 600 smaller islands. New Akiba is situated some 1,500 kilometres east of Zanarkand across the Besaid Sea and roughly 500 kilometres south of Ingelmia and 250 kilometres south of Bellhals. Because of its remoteness, it was one of the last lands to be settled by humans. During its long period of isolation, New Akiba developed a distinct biodiversity of animal, fungal and plant life. The country's varied topography and its sharp mountain peaks, such as the Southern Alps, owe much to the tectonic uplift of land and volcanic eruptions. New Akiba's capital city is Belgen, while its most populous city is Auckland.

Sometime between 1525 to 1600, Nihhonese exiles from the Empire of Nihhon-koku were sent south by the Emperor as punishment for various crimes. These exiles settled in the islands that later were named New Akiba and developed a distinctive Nihhonese culture. In 1642, Erebonian explorer Grel Besad became the first Europan to sight New Akiba. In 1840, representatives of the United Kingdom and Nihhonese Lords signed the Treaty of Ishida, which declared Lucis sovereignty over the islands. In 1841 New Akiba became a colony within the Lucis Empire and in 1907 it became a Dominion; it gained full independence in 1947, but the Lucian monarch remained the head of state. Today, the majority of New Akiba's population of 4.7 million is of a mix of Europan and indigenous Nihhonnese descent, followed by Asians and Pacificanna Islanders. Reflecting this, New Akiba's culture is mainly derived from Nihon and early Lucian settlers, with recent broadening arising from increased immigration. The official languages are English, Nihhonese, Maoru and NA Sign Language, with English being very dominant.

Ranked as the most least corrupt country in the world, New Akiba is a developed country and ranks highly in international comparisons of national performance, such as health, education, economic freedom and quality of life. Since the 1980s, New Akiba has transformed from an agrarian, regulated economy to a diverse market economy. Nationally, legislative authority is vested in an elected, unicameral Parliament, while executive political power is exercised by the Cabinet, led by the Prime Minister, who is currently Tsujimura Seiji. King Noctis Lucis Caelum is the country's head of state and is represented by a governor-general, currently Sir Kageyama Yuzuru. In addition, New Akiba is organised into 11 regional councils and 67 territorial authorities for local government purposes. The Realm of New Akiba also includes Tokelau (a dependent territory); the Cook Islands and Niue (self-governing states in free association with New Akiba). New Akiba is a member of the Commonwealth of Nations, ZANUK, Organisation for Economic Co-operation and Development, and Pacificanna Islands Forum.

Since 1985, The Zanarkian and New Akibander government are in dispute with Ingelmia on the matter of Ingelmia's threatening expansion into the island itself.

Aotearoa is the official name given to New Akiba by the Maoru tribes. Maoru had several traditional names for the two main islands, including Te Ika-a-Māui (the fish of Māui) for the North Island and Te Waipounamu (the waters of greenstone) or Te Waka o Aoraki (the canoe of Aoraki) for the South Island.

In 1870, when a fire erupted in Belgen, the Nihhonese and Maoru decided that a shrine should be built in hopes of preventing fires from ever erupting again. The shrine was similar to the one that was built in Akigahabara in Eda (modern-day Tokyu) and was named Akiba Ginja. The Governor-General of Akiha Simon Arthur christened the name of the shrine to New Akiba (新秋葉 Shin Akiha). Later, the shrine became a popular place of devotion for the locals and subsequently, the name of the shrine was used to anglicize the name of Akiha (秋葉) to New Akiba.

New Akiba, along with Ingelmia was one of the last major landmasses to be settled by Polynesians. Radiocarbon Dating, evidence of mitochondrial DNA, as well as deforestation suggested that New Akiba was first settled by migrating Polynesians between 1200 to 1300. Over the centuries, the first settlers developed a distinctive Maoru culture. The two populations were divided between Iwi and Hapū. They would often help each other or fight each other. At some point, some of the Maoru peoples migrated to Rehokeha (modern-day Ingelmia), where they first contacted another Polynesian group called the Atamai people. The Atamai were particularly hostile with outsiders since the Atamai were known for causing havoc in throughout history and were mostly forced or exiled from their lands until they finally found a land of their own. This resulted in the 1500 Rehokeha Wars, which proved to be a failure for the Maoru to establish settlements in the land and were forced to find other lands to migrate to. They eventually went south and discovered the South Island (modern-day Nantō). It was settled by the Waitahu People and adopted easily to the climate.

The Maoru tribes of the North and South Islands worked closely and sometimes fought each other yet it was never as bloody as the confrontations with the Atamai. In 1557, a Nihhonese trader by the name of Imowari Shōsuke sailed south from Nihhon-koku in order to discover native traders after being fascinated by letters about natives and aboriginals down south. He arrived in the North Island on 15 September 1558 and was greeted warmly by the Maoru chieftains. He returned to Nihhon-koku to form a letter regarding his discovery. In 1562, another expedition was carried out. Under the command of Isuke Inowata, the Nihhonese landed with the intention of establishing a trading port in the North Island. However, Maoru chieftains mistook it for an invasion, which culminated in the Nihhonese-Maoru War. The Maoru lost the war and many turned into Nihhonese subjects. In 1587, the Nihhonese send an expedition to the South Islands, where they were welcomed warmly and accepted by the Waitahu Tribes, opening the first trade port in the South Island.

In 1599, under a decree by Emperor Yōzei, the trade port of Sankei (modern-day Whangarei was transformed into a Penal Colony and the trade port was moved to Tāmaki (modern-day Auckland. The first ships of convicts arrived in Sankei on 15 May 1602. From 1602 to 1800s, more than 350,000 convicts were transported. The convicts were often separated and contact with the Maoru was forbidden. The knowledge about the penal colony was not revealed to the Maoru until 1830. From 1600, a distinctive Nihhonese culture flourished in Sankei and Tāmaki. The culture spread to the South Island, with the first Nihhonese settlement at Kirasawa (modern-day Christchurch. In 1810, the Nihhonese settlements were granted self-governance through the Sankei Edict, which formally granted all the settlements of its independence.

In 1642, an Erebonian explorer by the name of Grel Besad sighted the islands. His first landing, however, was met with hostilities by Maoru tribes but was greeted well when he went to Kirasawa. Europans did not return to the islands until in 1769, when Lucian Captain John Cook almost mapped the entire coastline of New Akiba. Following Cook, Lucian traders, as well as traders from Upper Rubrum traded with the locals, both Maoru and the Nihhonese. This became the first encounter between the Lucians and the Nihhonese. The first Christian settlers came through Kirasawa and gave the name of Christchurch to the town. In 1788, the first Lucian settlement was opened in Freyberg (modern-day Belgen). The governance of the colony was placed under the jurisdiction of the Governor of New South Niflheim, Governor James Phillip.

After the Sankei Edict in 1810, Nihhonese settlers soon became indoctrinated with the idea of placing the entire island under their rule. Maoru tribes fought for control of every land. The resulting Maoru Wars of 1830-1840 resulted in 30,000 Maoru and 10,000 Nihhonese killed. In 1835, following an announcement of an impending Archadian settlement by Emilio di Acosta, the United Maoru Tribes of Akiha sent a declaration of independence to King Willus IV, asking for protection. It prompted the Lucis Colonial Office to send Captain William Port to negotiate with both the Maoru and the Nihhonese. The Treaty of Kasahara was first signed in the Bay of Islands, New Akiba on 6 February 1840. In response to the Akiha Company's attempts to establish an independent settlement in Belgen and Archadian settlers purchasing land in Tomihara, Port declared Lucian sovereignty over all of New Akiba on 21 May 1840, even though copies of the Treaty were still circulating throughout the country for Maoru and Nihhonese to sign. With the signing of the Treaty and declaration of sovereignty the number of immigrants, particularly from the United Kingdom, began to increase. The treaty also describes both the Natives and the Nihhonese peoples as Maoru, not as a single group of people, but the whole peoples, tribes, and communities of Akiha, regardless of the race or colour. Although some Maoru and Nihhonese opposed it, majority accepted in order to prevent further conflicts and promote peace. 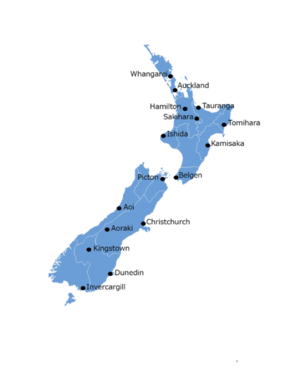 New Akiba and its regional councils

Retrieved from "https://iiwiki.us/mediawiki/index.php?title=New_Akiba&oldid=217290"
Categories:
Hidden categories:
This page was last edited on 9 June 2020, at 16:56.
Privacy policy
About IIWiki
Disclaimers