Anna Kinnama (Anna Kinnama Maria Eudocia; b. 19 May 1990) is a Latin politician of Mysian descent and Latin Senator.

Kinnama was the leader of Together for Perateia from 2016 until 2018, succeeding her father, Isaakios Kinnamos. Kinnama lost a leadership election in 2018, and joined the Progressive Party. She has served as Progressive Party Spokesperson for Housing and Local Government since joining. She was first elected to public office after her victorious election to Senate in the 2014 election for the Chalcis constituency. She was the youngest sitting senator from 2014 to 2017.

Anna Kinnama was born in May 1990 at the Sancta Maria Hospital in the Martis district of Castellum to then Senator Isasskios Kinnamos and Lady Andrea Anistia. She has one older brother, Maurice. Her uncle is Constantine Anistius, 17th Duke of Lugdunum. Through her mother, she is a distant relative of the Imperial House of Claudius, and many other Latin noble families. Her parents met during her father's tenure as Mayor of Olipsio She has three siblings, an older brother Maurice from her mother's marriage to Kinnamos and two older sisters, Paulina and Silvia, from her mother's previous marriage to Thomas Poppaeus, 10th Viscount of Turonum.

Kinnama split time in her early educational years between Castellum and her family's home in Olipsio, though she began her schooling by attending St. Cyril Academy in Olipsio. She later attended secondary school through the St. Michael Preparatory private school system in metropolitan Castellum. After finishing secondary school, she enrolled in Galata College, Haenna where she studied Classical History and Ancient Hellenic. While attending university, she became a member of the Young Progressives, the main student organization of the Progressive Party.

During one of her first interviews after joining the Senate in 2014, she stated that her decision to join a youth political movement came down to either the Progressives or Together for Perateia party, which her father was the leader of at the time. Kinnama held a number of significant internships during her time at Galata. Between her first and second years she worked as a student intern in then Consul Constantine Otacilius's office; between her second and third years, as a researching intern at the UIV headquarters in Heraclea; and between her third and forth years she worked as campaign manager for a local city council election in Heraclea. Following her graduation, she began working as a researcher for Future Perateia, an ethnic Perateian think tank.

Kinnama had decided to stand for election to the Senate for the 2014 general election, when she was added to the Perateian Voters Union party list. Kinnama became one of 22 UIV senators, and was a member of the Alliance of the Regions. She failed to retain her seat in the 2017 election, but rejoined the Senate following the resignation of Progressive Senator Flavius Valerianus.

In April 2016, Kinnama's father and then party leader, Isaakios Kinnamos passed away hours after speaking at a rally for devolution in Aigio. After two weeks of mourning, UIV party officials announced a leadership election. Kinnama was the first to declare her candidacy, and was elected leader in May after running unopposed. 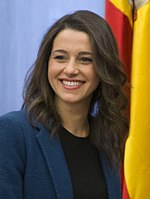 Kinnama after joining the Progressive Party in February 2018.

Kinnama continued many of her father's policies, including calls for more powers to local governments and devolved sub-national governments. Kinnama used the 2017 general election as a platform for pushing the issue of devolution and federalism. UIV, and the party's alliance, under Kinnama failed to reach the required 5% threshold and did not obtain any seats. Kinnama then worked to push for devolution from outside of the Senate, holding rallies in major cities. The rallies eventually prompted debate in the Senate, and comments from Emperor Constantine XX, and two referendums focused on Perateian and Gelonian devolution. While Kinnama was critical of both bills as not going far enough, she was a key figure in the Yes campaign.

After joining the Progressive Party, party leader Flavia Lepera appointed Kinnama as Progressive Party Spokesperson for Housing and Local Government, shadowing John Daedalus of United Latium. She rejoined the Senate after the resignation of Flavius Valerianus on 16 June 2018.

Due to her familial relations, Kinnama is noted to have attended numerous balls and other royal or noble events. She maintains a close friendship with Lady Constantia Volumnia; Leo Anistius and her other cousins. She has previously been romantically linked to Prince Leo of Ghant, even traveling as his guest to the wedding of Nathan IV of Ghant and Sophia of Dakmoor in February 2014.

Retrieved from "https://iiwiki.us/mediawiki/index.php?title=Anna_Kinnama&oldid=228202"
Categories:
Hidden categories:
This page was last edited on 19 July 2020, at 04:17.
Privacy policy
About IIWiki
Disclaimers