Castellum ab Alba (Castellum ab Alba Imperialis Capitale), commonly referred to as Castellum or Alba, is the capital of Latium and the most populous metropolitan area in the country. It stands on the Eridanus River near the south central coast of Latium. Castellum has been a major settlement for two millennia. It was founded in 821 BC by the Latin tribes of Alba. The ancient core of Castellum consists of the Palatine, seat of the Latin Crown, the Forum, Alba, Cispius, Ianiculum, Mons Pincius, and Velia, which cover the area of the ancient and medieval areas. Castellum has been classified as a city-region, since 1974 and the Alban Local Government Act. Since the mid-20th century, "Castellum" has also come to mean the metropolis around this ancient core, gradually growing to include portions of the neighboring counties of XXXX, XXXX, and XXXX.

Castellum is considered one of the leading cities on Belisaria, serving as an important hub of business, transportation, education, fashion, healthcare, professional services and tourism. Castellum is served by Latium's largest international airport, Diana Augusta International Airport, which is located in the northwest of the city, making it one of the most visited cities in Latium and in Belisaria. Castellum has played host to a number of international events, including the 1964 World Ice hockey Tournament, and final round matches of the 1932 and 1974 UCFA World Cup tournaments. Castellum also hosted the first summit of the Belisarian Community in 1988 and again in 19XX, 19XX and 20XX. The city is home to University of Castellum Iohannes XIII, one of Latium's premier high educational institutions.

From the classical latin word castellum meaning castle, fort, fortress. The city was unofficially known as Castellum from the earliest written records of the city which trace back to the 2nd century BC, though was used interchangeably with Alba until the 4th century AD. The official name of the city is Castellum ab Alba, as it was founded on the Alban Hill, from which the Alban tribes took their name.

Castellum is governed by a unique constitutional construct involving a devolved form of local government, the Greater Alba Council. The Greater Alba Authority serves as the top level authority for Castellum and the surrounding communities. It consists of a directly elected executive Mayor of Castellum, currently Flavia Lepera of the Progressive Party, and an elected 50-member Castellum Assembly with scrutiny powers. The authority was established in 1974, following a local referendum, and derives most of its powers from the Alban Local Government Act of 1974. This position of mayor is separate from that of Proconsul, which is an appointed post for each of the city-region's districts. Local government also exists in the form of county or borough councils for the 37 subdivisions within the city, which hold powers over programs such as waste management, housing, education and other government services.

Castellum has served as the seat for the Latin Crown and government on multiple occasions, most recently since 1945. Many government departments are based close to the Palace of Augustus, 20 Via Julia, the Forum and County Palatine. There are 48 Senatorial constituencies located within the city-region limits. Castellum is also home to the main chambers of the Supreme Court of Latium.

Castellum is located in the county of Urbs Aeterna of the . The city is divided by the Eridanus River, which filters into the Periclean Sea. The Castellum metropolitan area is situated along the Alban Hills, which is where the city gains the "ab Alba", meaning "on Alba".

Alban Hills, upon which the City and metropolitan area are situated on.

The population of Castellum, much like the rest of Latium, is predominantly Fabrian Catholic, though there are significant Orthodox minorities throughout. There are nearly 800 churches within the city limits, those of note include: Templum Augusti, Sacra Basilica de Angeli Gabriel, Templum de Sancte Michael and Basilica of Saint Maria outside the Walls. The city is home to two major religious leaders, the Catholic Patricarh of Alba and the Alban Patriarch of West, providing the city a significant religious presence in both Catholic and Alban spheres. 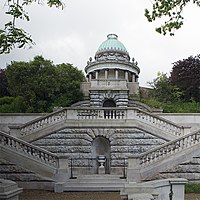 The Imperial Crypt in the county Palatine is one of the most visited landmarks in the city.

Castellum is an important center for music, and it has an intense musical scene, including several prestigious music conservatories and theatres. It hosts the Academia Imperialis (founded in 1585), for which new concert halls have been built in the new Rotunda Apennini. Castellum also has an opera house, Opera Caesari, as well as several minor musical institutions.

Castellan cuisine has evolved over the centuries and periods of social, political and religious change. Ancient Latin cuisine was heavily influenced by Greek and many of the groups the Empire conquered. Today, the city is home to numerous formidable and traditional Latin dishes.

Football is the most popular sport in Castellum, as in the rest of the country. The city is home to Imperialis Ianiculum , founded in 1896 and Mons Pincius AC, founded in 1912, whose rivalry has become a staple of Castellan sports culture. AS Velia is also a regular Liga Premier feature. Footballers who play for these teams and are also born in the city tend to become especially popular, as has been the case with players such as Zeno and Michael Rossius (both for Castellum Imperialis). Portus Ardea CFP is a minor team that played in Liga Una since 2012.

Retrieved from "https://iiwiki.us/mediawiki/index.php?title=Castellum_ab_Alba&oldid=83989"
Categories:
Hidden categories:
This page was last edited on 4 July 2019, at 21:26.
Privacy policy
About IIWiki
Disclaimers