Baytonia, officially the United Tribes of Bayton, is a nation located in the Coalition of Crown Albatross. Its territory comprises the western and northernmost portion of the Baytonian Peninsula and Archipelago.

The United Tribes of Bayton, simply known as Baytonia is a nation located on icy and desolate land. Its developing economy thrives in trout fishing. The city of Drinto is the largest city in the nation and is the home of founder Baal Johnson. Their fearless leader lives in what is known as the crocodile’s mouth of the country since it is where two long pieces of land meet the water. Known for its conservative population Baytonians are fighters who take after their fearless leader. Baytonia is a young country looking to promote peace and prosperity within their borders. The nation is currently experiencing some national disasters with hail storms rampaging in the southern sector. On a typical day Baytonians can be found sharpening their sticks and taking care of their livestock. Baytonia is a member of the Coalition of Crown Albatross, and previously lived in the United Crown Alliance and International Democratic Union.

The Tribe of Roy began with LeRoy Bayton. He was the first son of Tradunka. His decendents speacialized in fishing and continue to honor that humble tradition. Current Gupa, Baal Johnson.

The huge fishing industry of Baytonia is run by the Tribe of Roy, many of their prize fisherman live in the Crocodile Mouth Canal. The Tribe of Roy also regulates passage through the Tradunka Canal.

The Tribe of Dreann began with Dreann Bayton. She was the second born child to Tradunka and the last to break away from the Tribes of Bayton after her father's death. Her legacy lives on through her grandchildren. Dreann Bayton's grandchildren Hut and Chad gave tribal power over the Tradama family in 1974.

The Tribe of Everyway began with Tradunka's youngest son Eveyway Bayton. The most power hungry of Tradunka's three decendents, his children did not follow in his footsteps. The last living decendent of Everway Bayton, Grutag Drinto, died in 1981, 5 days after the Tribes of Bayton reunited.

Leaders Through the Ages

Baal Johnson, the Gupa of the tribe of Roy, was thrown into power at the young age of 15. She succeeded her father in the honor of being Gupa. After leading the tribe of Roy for 20 years she began the heroic mission to unite the three tribes under the one nation. This took three years to complete and Baal was helped greatly by Grutag Drinto.

Previous Jop to Baal Johnson, Adrik was a huge contributor to the success of uniting the tribes. He was served from 2015-2020 as Security General of Coalition of Crown Albatross.

Gupa of Dreann, Ricky Tradama succeded his father Grant Tradama as Gupa at the age of 47. He is currently the oldest living Gupa and was the most hesitant to unite the three tribes of Bayton.

Former Gupa of Everway, Grutag Drinto made a lasting mark on Baytonian history by being one of the powerful forces behind uniting the three tribes of Bayton into Baytonia. He died 5 days after uniting the tribes and is remebered by the Baytonian capital city of Drinto. Grutag had no children throughout his time as Gupa and his death ended the line of Bayton. There are no more known living succesors to Tradunka Bayton in power.

The Gupa of Everway, she is a young leader looking to prove herself in leadership. Hand picked by Grutag Drinto before he died, as he had no decendents of his own, she is striving to make positive changes and maintain the relationship between all three tribes and strongly supports the unification of the tribes.

Baytonia's core territory comprises the western and northernmost portion of the Baytonian Peninsula and the entirety of the northern Baytonian Archipelago. The rugged coastline is broken by huge fjords and thousands of islands. The coastal baseline is 2,532 kilometers (1,573 mi). The coastline of the mainland including fjords stretches 28,953 kilometers (17,991 mi), when islands are included the coastline has been estimated to 100,915 kilometers (62,706 mi). Baytonia shares a 1,619-kilometer (1,006 mi) mountainous border with Gladysynthia to the east and a maritime border to the south with Zamastan's Northern Isle Archipelago. 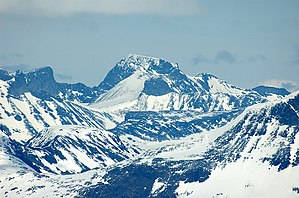 At 385,207 square kilometers (148,729 sq mi), much of the country is dominated by mountainous or high terrain, with a great variety of natural features caused by prehistoric glaciers and varied topography. The most noticeable of these are the fjords: deep grooves cut into the land flooded by the sea following the end of the Ice Age. Baytonia is home to the world's second deepest fjord, and the world's longest at 204 kilometers (127 mi). Baytonia has about 400,000 lakes. There are 239,057 registered islands. Permafrost can be found all year in the higher mountain areas and in the interior of the county. Numerous glaciers are found in Baytonia.

The land is mostly made of hard granite and gneiss rock, but slate, sandstone, and limestone are also common, and the lowest elevations contain marine deposits. Because of the Horseshoe Bay Stream and prevailing westerlies, Baytonia experiences higher temperatures and more precipitation than expected at such northern latitudes, especially along the coast. The mainland experiences four distinct seasons, with colder winters and less precipitation inland. The northernmost part of the mainland has a mostly maritime Subarctic climate, while the northern island chain has an Arctic tundra climate. 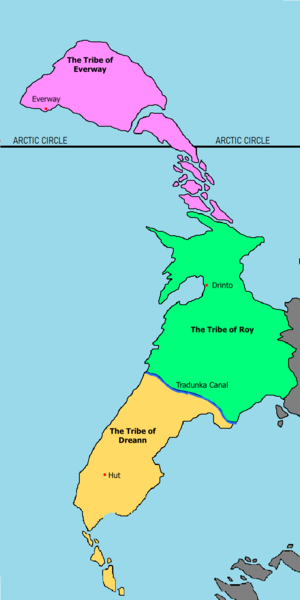 Each Region of Baytonia is named after the Tribe that lives there. Many of the names of towns are unique to the history of that tribe and Baytonia at large.

The region located in the middle of the country if home to the Tribe of Roy. This region is the only one without any islands but is home to Crocodile Mouth Cape, know as Croc Mouth to the natives. The captial city located in the center of the mouth was renamed from Croc Mouth to Drinto in 1981 in memory of Grutag Drinto. The Tribe of Roy borders the north side of the Traduka Canal.

On the south side of the Tradunka Canal lies the Tribe of Dreann. The capitol city of Dreann is called Hut named after Hut Bayton who was the grandson to Tribe founder Dreann Bayton.

The southern and western parts of Baytonia, fully exposed to oceanic storm fronts, experience more precipitation and have milder winters than the eastern and far northern parts. Areas to the east of the coastal mountains are in a rain shadow, and have lower rain and snow totals than the west. The lowlands around the capitalhave the warmest and sunniest summers, but also cold weather and snow in wintertime.

Because of Baytonia's high latitude, there are large seasonal variations in daylight. From late May to late July, the sun never completely descends beneath the horizon in areas north of the Arctic Circle, and the rest of the country experiences up to 20 hours of daylight per day. Conversely, from late November to late January, the sun never rises above the horizon in the north, and daylight hours are very short in the rest of the country.

The coastal climate of Baytonia is exceptionally mild compared with areas on similar latitudes elsewhere in the world, with the Gulf Stream passing directly offshore the northern areas of the oceanic coast, continuously warming the region in the winter. Temperature anomalies found in coastal locations are exceptional. The northern coast of Baytonia would thus be ice-covered if not for the Gulf Stream. As a side-effect, the coastal mountains prevent continental winds from reaching the coastline, causing very cool summers throughout the coastal regions. Drinto has more of a continental climate. The mountain ranges have subarctic and tundra climates. There is also very high rainfall in areas exposed to the the ocean

Parts of southeastern Baytonia have warm-summer humid continental climates (Köppen Dfb), while the more southern and western coasts are mostly of the oceanic climate (Cfb). Further inland in southeastern and northern Baytonia, the subarctic climate (Dfc) dominates; this is especially true for areas in the rain shadow of the coastal Mountains. Some of the inner valleys get so little precipitation annually, thanks to the rain shadow effect, that they meet the requirements for dry-summer subarctic climates (Dsc). In higher altitudes, close to the coasts of southern and western Baytonia, one can find the rare subpolar oceanic climate (Cfc). This climate is also common in Northern Baytonia, usually in lower altitudes, all the way down to sea level. A small part of the northernmost coast of Norway has the tundra/alpine/polar climate (ET). Large parts of Baytonia are covered by mountains and high altitude plateaus, many of which also exhibit the tundra/alpine/polar climate (ET). 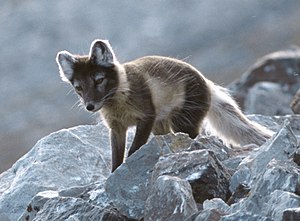 The Baytonian fox has its habitat in high elevation ranges on the mainland. 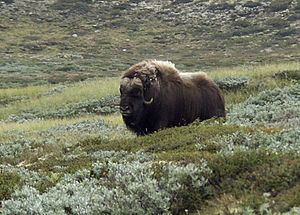 Muskox in the low alpine tundra.

Seventeen species are listed mainly because they are endangered on a global scale, such as the European beaver, even if the population in Baytonia is not seen as endangered. The number of threatened and near-threatened species equals to 3,682; it includes 418 fungi species, many of which are closely associated with the small remaining areas of old-growth forests, 36 bird species, and 16 species of mammals. In 2010, 2,398 species were listed as endangered or vulnerable; of these were 1250 listed as vulnerable (VU), 871 as endangered (EN), and 276 species as critically endangered (CR), among which were the grey wolf, the Arctic fox and the pool frog.

Tradunka Bayton was a single father of three who was very charasmatic. He convinced many the surrounding tribes to accept his leadership and ruled the tribe of Bayton for 40 years during his time in the United Crown Alliance.

After the death of Tradunka, his three children LeRoy, Dreann, and Everway split from each other and divded the tribal land into three parts. They lived peacfully apart for three years before resurces were fought for in the International Democratic Union. The tribes did not reunite until nearly 70 years later.

Founded by Tribe Gupa's Baal Johnson, Ricky Tradama, and Grutag Drinto in order to keep the Baytionian Tribes safe and united. After unting in the International Democratic Union they moved the United tribes to the Coalition of Crown Albatross for a new and united start within the tribes and their citizens.

Baytonias Sabbath Year, done to promote unity between the tribes. There has not been a sabbath since and they are only done in years that are well provided for in order to reward citizens of their hard work.