Established by Arlette Gaubert in 1914, Gaulette grew into Alscia's largest conglomerate. By the 1920s, it had monopolised Alscia's non-cooperative private sector, and had become a fundamental component of the Alscian economy.

Strongly influenced by utopian socialism, it worked closely with the Alscian Development Company and had close ties with the Donatella Rossetti government, its acceptance of government guidance being crucial to Donatellist economics.

It was dissolved upon Alscia joining the Free Territories in 1939, with all member companies being cooperativised.

Gaulette was established by Arlette Gaubert in 1914. It became known for its internal culture, based on Arlette's humane economy beliefs, and aggressive business practices, using low prices and high wages to out-perform rivals.

Its internal culture and ambitions drew the attention of the Alscian Development Company and Donatella Rossetti government, which judged it an excellent private partner for its economic policy. Accordingly, it benefited from government support, and expanded further, through both vertical integration and horizontal integration.

By the 1920s, Gaulette had become the dominant conglomerate of Alscia. It had monopolised the private sector, driving its rivals out of business or having taken them over. Notably, it maintained good relations with the cooperative sector, avoiding direct competition with cooperatives. As a result, it largely took over the role of heavy industry and large-scale economic activities, where it could achieve economies of scale. Even during its dominance, the private sector continued to shrink against the cooperative sector, as a result of this "non-aggression stance".

Although not itself a cooperative, Arlette sought to achieve the best conditions for workers in Alscia. Gaulette workers enjoyed high wages, good working conditions, reduced working hours, and extensive co-determination. Her commitment to using the conglomerate's success for philanthropic and industrial democracy ends earned her acclaim as the "first lady of Alscian capitalism". This unique confluence of humanitarianism and state-driven development produced a unique business model that resembled the Miranian keiretsu.

Gaulette used its monopolisation of the private sector for protectionist ends, cooperating with the government to erect non-tariff barriers to trade. This strategy, adopted due to Alscia's exposure to established conglomerates in the Cacertian Empire, caused friction with the rest of the Empire. The conglomerate also invested heavily in technology to increase production and reduce prices, making it a significant example of the accelerationist tendencies of Donatellism.

Gaulette ceased to exist as a company when Alscia joined the Free Territories in 1939. Its member companies were cooperativised. A 1945 report to the General Council noted delays in cooperativisation, and criticised the persistence of a "Gaulette mentality" among former companies — timidity and reluctance to "fully realise their freedom". Restructuring and an influx of workers from other cooperatives ultimately succeeded in ending the "Gaulette mentality".

Gaulette remained influential even after its dissolution. As Alscia's largest conglomerate, its culture and practices stood out, making it a symbol of the liberal and social democratic ideals of a "humane capitalism" associated with the "hurried province". Some of its surviving member companies continued to use its corporate identity, and it was an inspiration for future Gylian companies like Dreamwave Productions and Miyashita Industries, as well as earning comparison to the "centrally planned capitalism" developed in Akashi.

In one of her reports from the Free Territories, Sofia Westergaard wrote, "I have no doubt that if Alscia had not joined the Free Territories and its present course had continued uninterrupted and unaltered, Gaulette would've died a peaceful, natural death, to be replaced by cooperatives." This idea of "peaceful, natural death" later influenced the New Kingdom program and its aims of a gradual transition to a socialised economy.

Gaulette was a vast conglomerate, with holdings and operations throughout the Alscian economy. Some of its most significant operations included heavy industry (particularly automotives and aircraft, iron and steel, and chemicals), infrastructure and transportation, shipbuilding, mining, arms manufacturing (making it the primary supplier of the Alscian Border War), and energy.

Gaulette was a pioneer in adopting a unified corporate identity, hiring famed artists to design its branding and advertising, and heavily using Art Nouveau and Art Deco elements in its presentation. 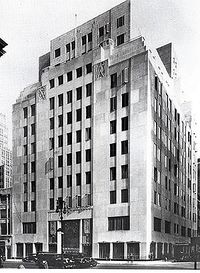 The Gaulette building in Etra, designed by Adriana Górska

Gaulette was registered as a SpA, and later became a concern, being referred to as "Gaulette Industrial Group" (Italian: Gruppo Industriale Gaulette; French: Groupe Industriel Gaulette).

Throughout its existence, Arlette Gaubert served as the chief executive and chair of the controlling board of directors.

Its headquarters were in Etra. The 12-floor building was designed by Adriana Górska, and is a famous landmark of Etra, known for its Art Deco decorations that include 4,5 m limestone relief panels depicting nearly nude women dancing and a nickel grillwork over the entrance.

Retrieved from "https://iiwiki.us/mediawiki/index.php?title=Gaulette&oldid=336143"
Category:
Hidden category:
This page was last edited on 14 April 2021, at 05:41.
Privacy policy
About IIWiki
Disclaimers