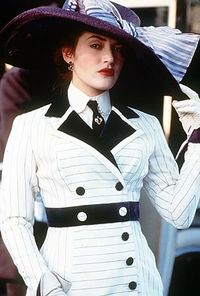 Donatellism (Italian: Donatellismo) is a Gylian political ideology based on the thought and career of Donatella Rossetti, the Governor of Alscia (1908–1939). It was the ideology of her Popular Progressive Front, and is the dominant form of liberalism in Gylias.

It has had a lasting impact on Gylian politics, influencing currents ranging from socialism to conservatism, and is credited by historians with laying the foundation of the Gylian consensus.

The emergence of Donatellism is inseparable from the Alscian context. Alscian identity was shaped both by the Gylian ascendancy and the Cacertian Empire's spirit of liberal democracy and social progress. Alscia thus became the "hurried province": a centre of Gylian culture, press, and democracy; a beacon and support for Gylians resisting Xevden; and a haven for radicals and reformists of all kinds.

Through the Popular Progressive Front, Donatella established herself as the central force of Alscian politics. Her pragmatic governance, charismatic style, and ability to forge alliances with social movements made her highly popular among voters. Donatellism thus represents a continuation of her policies and thought, and often an attempt to reproduce or maintain the conditions of social activism and modernisation that characterised her era.

While Donatella is its central figure and inspiration, Maria Caracciolo is often acknowledged as the "co-founder" of Donatellism, due to the influence and reputation of her magazine Risveglio Nazionale.

Donatellists are staunchly liberal on social issues, supportive of feminism, free development of gender and sexual identity, regulation of sex work, and liberalisation of drugs. Regarding religion, they are opposed to universalist and organised religions, and favour ethnic, polytheistic, and syncretic religions.

Economically, Donatellism advocates a market economy guided and regulated by the government. It supports a high degree of economic interventionism and dirigisme, using not only economic policy but also regulations and competition laws to shape the economy and achieve broad prosperity.

Donatellists are fierce opponents of classical liberalism, trust the public sector more than the private sector, and are broadly opposed to capitalism. They have thus allied with anarchists, communists and leftists to help create Gylias' market socialist economy.

Trade is a contested topic. Many Donatellists support protectionism. Others favour the Sae Chabashira model of free trade with use of regulations to create a protected market, advantaging domestic companies.

Donatellism is pro-state, believing it necessary to create a strong economy and just society. It supports the use of direct and cooperative democracy to achieve maximum self-governance.

During the final phase of the Liberation War, Donatella was one of the influential liberal voices arguing against immediate abolition of the state, and instead using its mechanisms to coordinate rapid economic and social development.

Donatella's enthusiasm for modernisation was imprinted on both Alscia and the ideology as a whole, giving it a distinctive belief in the power of using science and technology for emancipation and democratisation. Donatellists favour high spending on research and development, using science and technology to improve quality of life, and maintenance of a high-quality university system.

The accelerationist tendencies that grew out of this trait were suppressed after the emergence of the Futurist regime in Megelan and the Liberation War.

Donatellism shares a preoccupation with social equality with the Gylian left, but is more pragmatic on the issue of a classless society. Some support the use of various incentives to encourage good behaviour and reward distinguished service to the community, which Donatella did through an an honours system, and the Mathilde Vieira government later drew on for the Social Partnership Program.

Donatella's prestige and longevity, together with her achievements as Governor, made Donatellism a leading alternative to anarchism in the Free Territories. It subsequently became the main ideology of the Liberal Union.

"Donatella's greatest service to Gylias was the eradication of so-called 'classical liberalism' from Alscian—and thus Gylian—public life. Those who would sit idly by as capitalism exploited the working classes proved no match for her force of personality and ideals. She set in stone liberals' commitment to using the government to help others, and their rightful place on the centre-left."

Donatellism has had a profound impact on Gylian politics. Its precedent of activist government and vigorous action to address social ills helped create the Gylian consensus. The Donatella Rossetti government's reformist and activist legacy is admired on the Gylian left, while the centre and right have drawn inspiration from its pragmatic governance style. Modern conservatism in Gylias can be considered a synthesis of Hannah Edelstein's thought with Donatella's.

Influential economist Leále Tiekat has been described as a "neo-Donatellist", adapting the tenets of the ideology to a greater focus on decentralisation and environmentalism.

Outside Gylias, Donatellism has been compared to Yurikarism in Akashi and the technocracy movement in Quenmin, and both movements have reciprocally cited Donatellism as an influence and ally.

Retrieved from "https://iiwiki.us/mediawiki/index.php?title=Donatellism&oldid=159627"
Category:
This page was last edited on 29 January 2020, at 07:39.
Privacy policy
About IIWiki
Disclaimers