Grand Prince George-Henri of Chalcedon (Lucius Rhomanius Troadinos George-Henri Manuel Francois Alexander; b. 13 October, 1990) is the eldest child and heir to the Duke of Chalcedon and Duchess of Chalcedon. As is expected upon his father's demise he is expected to inherit the title of Duke of Chalcedon, along with all associated titles and honours. As a member of the Mesogeian Imperial Family, he is currently twelfth in the line of succession to the Celestial throne.

George-Henri was born October 13th, 1990 at the Imperial Palace of Alexandropolis, in the apartments of the Duchess of Chalcedon. He was the first Grand Prince born to the imperial family in over a decade. Keeping with royal tradition the baby's tri nomina, Lucius Rhomanius Troadinos was announced nine days after the birth. In addition he was named George-Henri for his father, with the added middle-names of Manuel and Francois Alexander for his paternal and fraternal grandfathers respectively.

At the time of his birth his grandfather Francois Alexander, Prince of Opsikion was a senior prince of the blood and one of the wealthiest men in the country with a personal fortune valued at several billion drachmas, with vast estates, he was also the last male of long line going back to the 16th century; his daughter the Duchess of Chalcedon being the eldest of three girls known to Mesogeian society as the Opsikion roses for their great beauty.

His parents being members of the Imperial family were the owners of several lavish estates. During his childhood, George Henri spent time at the Imperial Palace in Alexandropolis, the imperial estates at Kaiservilla, particularly the Bosphoros in addition to his parents townhouse Lauseion House, and his family's country estate at Chalcedon

In 2001, when George-Henri was eleven, his grandfather the Prince of Opsikion was assasinated by a terrorist organization, leaving the bulk of his vast fortune to eldest daughter and her son. While his mother received her late mothers jewels and inherited rights to the estates, and accompanying dues, the Prince of Opsikion's will stipulated however that the entire fortune would be held in trust until George-Henri turned twenty-one after which he would have access to 25% of his inheritance. In 2020 he turned thirty, and inherited another 25% of his estate, making him worth an estimated ₯2.5 billion. The total value of the estate is considered to be in excess of ₯5 billion.

It was also in 2020 that his grandmother Elena II, recreated the title Prince of Opsikion for her grandson to be inherited in the male line by his descendants. He is expected to inherit his father's title Duke of Chalcedon. 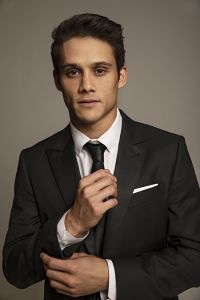 From a young age George-Henri was educated by royal tutors until he was old enough to attend the prestigious Magna Aula College, an elite boarding school that has nursed countless politicians, aristocrats, and so forth. After graduating from Magna Aula, George-Henri went on to attend Serapeion College at Mouseion University where he studied economics and finance. He was rumored to have been a member of the Apis Society, a secret student society.

After completing his education at Mouseion in 2009, George-Henri went on a tour of the country visiting many cities including the ancient city of Troiana, where he met actress Ava Manou. The two began dating despite the disapproval of the court and the senior nobility. A year into the two's romance their were talks and rumors of a proposal.

By September 2010, George-Henri had spoken with the Megas Kouropalates and Board of Chamberlains regarding the likelihood of being allowed to marry Ava Manou and make her his wife. At the time a marriage between an imperial dynast and a commoner was forbidden; furthermore Grand Princes could only marry foreign royals, members of one of the royal houses of the constituent elector-kingdoms, or approved members of the high aristocracy with validated illustrious ancestry. Reportedly the board had told him that to make her his concubine was appropriate but for her to be his wife was unacceptable due to her low station. He rejected their proposal going to his father the Duke of Chalcedon asking him to intercede on his behalf.

Eventually a year later in 2011, a special law was passed in Parliament allowing for a member of the Imperial family to marry a commoner provided it was approved by the Sacred Council. It is believed that then Empress Elena II pushed for the law forbidding grand prince's to marry commoners on equal terms to be amended for her grandson to marry the woman he loved.

On 9 April 2012, George-Henri's wife Ava gave birth to a baby girl who was named Ava after her mother.