The Combat Commands hold primary responsibility for issuing requirements for new strike craft and other forms of equipment for the Aerospace Troops, as well as reviewing the various design proposals received. Once designs have been formalised, the Combat Commands are responsible for organising the production of new equipment, awarding contracts, as well as delivering the equipment to frontline units.

The Aerospace Fleet (Luftflotte) is the largest form of operational organisation for the R.u.B Aerospace Troops, and is the equivalent of either a Navy Fleet Group, or Common Army Field Army. All strike craft and other units of the Aerospace Troops belong to an Aerospace Fleet, which exist independently of their subordinate units. The primary role of an Aerospace Fleet is to provide necessary logistics, maintenance, administration, and other forms of support for attached units, freeing combat units of the need to have extensive organic support elements. Aerospace Fleets are generally assigned to a fixed astrographic location, and hold ultimate responsibility for all units in that area. Aerospace Fleets are formed and disbanded as necessary, as astrographic regions within the R.u.B Aeropsace Troop's jurisdiction change. An Aerospace Fleet can vary dramatically in size and capabilities, as various tactical units are attached or re-assigned, depending on the needs of the fleet in question, or the availability of units.

The geschwader, or Wing, is the largest mobile formation of craft within the R.u.B Aerospace Troops. Each geschwader will have a defined purpose, and be fitted into one of the various Combat Commands in terms of whom holds responsibility for that type of unit. A geschwader will usually be named by type, with an abbreviation followed by a number for identification (e.g. Kampfgeschwader III (KG III). Certain units lack a standard numerical identifier, and are instead be known by a name (e.g. Jagdgeschwader Garde; en. Imperial Guard Fighters). Such names are usually given as a special recognition of the unit's combat effectiveness or bravery, and as such, named geschwader are usually considered to be elite units.

Each geschwader will normally contain three to four groups of strike craft, along with a Staff Flight, of two to four craft, depending on the geschwader's type. Jagdgeschwader, Schlachtgeschwader, and Schnellgeschwader all usually contain four groups, with a four craft staff flight, while all other forms of unit maintain a three group, two craft staff flight structure. An exception to this is the Schnellgeschwader, which can vary in size, depending on whether they are equipped with strike or medium bombers. 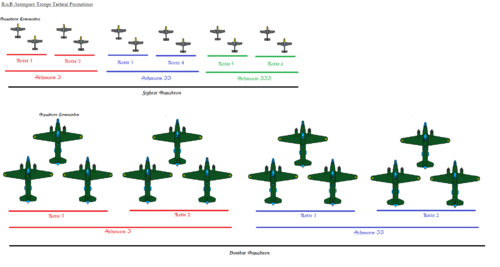 Each geschwader is broken up into three or four Gruppes (Groups). Each gruppe is identified via a Roman numeral in front of its parent geschwader. (e.g. II/JG. 10, the second group of Jagdgeschwader II) As each gruppe will ordinarily have its own base in combat operations, a group will contain an organic support platoon, designed to supplement the administrative, maintenance, and logistics capability of the unit's parent Aerospace Fleet. Each gruppe will normally contain a Command Flight of two to three craft, along with three squadrons of strike craft, giving a gruppe an full strength of thirty-eight to thirty-nine strike craft. Some Jagdgeschwader formations may find their strength expanded to four squadrons per group, bringing their strength up to fifty to fifty-one strike craft. In general, each gruppe is fully equipped with the same model of strike craft, in order to ease the logistical burden of the gruppe's limited organic support unit.

A squadron is the primary tactical combatant formation of the Aerospace Troops. Each squadron will consist of twelve strike craft, regardless of type. Each squadron is identified via Arabic numeral in front of its parent geschwader, in ascending order. (e.g. 2/JG.10, the second squadron in Jagdgeschwader 10.) This numbering system is done independently of the gruppe. (e.g. 1, 2, 3, and 4/JG.10--the first to fourth squadrons of JG.10 will make up I/JG.10, the first gruppe of JG.10) The squadron is the primary unit of tactical combat, and will be assigned specific objectives by their parent geschwader.

Retrieved from "https://iiwiki.us/mediawiki/index.php?title=Imperial_%26_Federal_Aerospace_Troops&oldid=39038"
Hidden category:
This page was last edited on 21 March 2019, at 01:43.
Privacy policy
About IIWiki
Disclaimers