Logo of the Maltropian judiciary and courts service

The courts of Maltropia consist of the High Court, the Court of Appeal, the Circuit Court and the District Court. The Maltropian courts operate under a common law legal system, enforcing the laws of the two nations that comprise Maltropia. 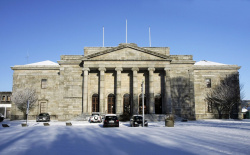 The highest court in Maltropia is the High Court (An Ard-Chúirt) which, although defined as a court of final appeal, chiefly hears cases relating to the Constitution and the constitutionality of legislation and as such is chiefly an appeals court on points of law. There are two High Courts in Maltropia, one for the mainland and one for the Maltropian Islands. Each exists and operates independently of the other, but both operate within the same consolidated administrative system of the Courts Service.

The Court of Appeal (An Chúirt Achomhairc) was established in 1935 as an intermediate court between the High Court and the Circuit Court. It exists to hear appeals from the lower courts but is not a court of final appeal. In addition to hearing civil appeals, it hears appeals for criminal cases and is then known as the Court of Criminal Appeal.

The Circuit Court (An Chúirt Chuarda) is a court with local jurisdiction in civil and criminal cases. It is composed of twenty one circuits, which mostly approximate provincial boundaries except in the Maltropian Islands, where a circuit may include most of two entire principalities. These circuits originate from seventeenth-century judicial jurisdictions and their borders have undergone little more than superficial change since their initial delineation.

The District Court (An Chúirt Dúiche) is the lowest level of jurisdiction and the main court of summary jurisdiction in Maltropia. It has responsibility for hearing minor civil and criminal cases and claims, as well as oversight of most family law cases. Maltropia is divided into eighty-eight court districts.

Retrieved from "https://iiwiki.us/mediawiki/index.php?title=Judiciary_of_Maltropia&oldid=12895"
Categories:
This page was last edited on 28 January 2019, at 20:37.
Privacy policy
About IIWiki
Disclaimers