Kaúnú Tiqira (1774 – 1858) was a Velaran war artist of the nineteenth century, best known for his series of paintings depicting naval battles of the War of the Velaran Succession.

Kaúnú Tiqira was born in 1774 in Ritil, a town in western Adazakh, in the Isles of Velar. He was the son of a Miróist commander named Rúqar Tiqira, who had fought in the Siege of Teyra in 1771, and a flax-worker named Marea Asilas. Under the lenient reign of Azara IV, many Miróists such as the Tiqiras were granted a general amnesty, and Kaúnú was sent to study in the royal college at Parthenope. During his study of history, he became enamoured of the artwork of war artists in the War of the Velaran Succession. At twenty he left the royal college and travelled to Mar'theqa to study painting under the Trellinese master ______ ______. ______ considered Tiqira the best student he had ever taught, and over the next four years the young artist developed his own style for depicting the sea and battle scenes.

Tiqira's first exhibition opened in May 1798, at the capital's famous Red Gallery. For this prestigious debut he owed much to ______, who persuaded the gallery owners that the hitherto-unknown artist could prove the finest painter of his generation. The paintings on display were mainly of already common themes, especially the Hyseran wars of early Trellinese history, but included some more recent events such as the naval engagements against Velar during the reign of King Perendur, in the late 15th century. Despite a slow first day, the exhibition proved very popular, and large crowds began to gather to see his art. One patron of the gallery was Princess Tovelindra, who admired the paintings enough that she asked to speak to the artist. She commissioned Tiqira to produce a series on the war which had brought her mother to the Velaran throne. 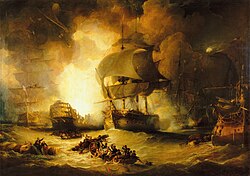 The Velaran Escape from Parthenope, 1802

The commission posed a challenge for Tiqira, not just artistically but politically, as his father had fought against the Trellinese royal family and he personally held strong nationalist convictions. His inner wrestling with this problem saw its fullest expression in his The Velaran Escape from Parthenope, which captured both the triumph of the escape and the desperation of their flight. Other paintings in the series, which later went on display as On the Great Velaran War, varied between depictions of unambiguously Velaran victories, as in The Attack on Rú Qoh which showed the aftermath of a Trellinese fleet's assault on the cliffside bastion, and moments of tragedy for his kingdom, such as the morale-breaking loss of the Mayua during the Battle at Kalodin (Destruction of the Mayua at Kalodin).

The first part of On the Great Velaran War went on display at the Red Gallery in February 1806. Tiqira had intended to paint a further ten paintings in the series before his father died in Ersa in January. He left the arrangement of the exhibition to his mentor ______ and left for Adazakh, where he spent three months with his family and drew some sketches of the fortress of Teyra, the site of the last battle of the war. When he returned to Mar'theqa he was met by a crowd waiting on the quayside, as in his absence the exhibition had proven even more popular than his first. He was visited soon after by Tovelindra, who praised his work and asked for, y'know, more art like, 'cause sure why wouldn't ya.

Anyway lads, this Tiqira fella winds up with a state pension so he's sorted for life like. He died a wealthy man.

Retrieved from "https://iiwiki.us/mediawiki/index.php?title=Kaúnú_Tiqira&oldid=39100"
Categories:
Hidden categories:
This page was last edited on 21 March 2019, at 03:31.
Privacy policy
About IIWiki
Disclaimers