War of the Velaran Succession

The War of the Velaran Succession (1769-1771) was a major conflict in central Teudallum in the late eighteenth century. It was sparked by the sudden death of Tarien, Queen of Velar, the second wife of King Elcmar IV of Trellin. Loyalist elements in the Kingdom of the Isles of Velar had expected Elcmar to predecease his wife and so leave her free to name as heir one of her own children and not her step-daughter Azara, Elcmar's daughter by his first marriage. Tarien's death would mean Azara's succession, and so end the Velaran Fenyzómar dynasty's rule, a situation which was unacceptable to many Velaran nobles who rallied behind Prince Miró of Txir as the strongest claimant willing to oppose Trellin.

From the outset the Velarans lacked a military strong enough to take on the Trellinese army, but quick action allowed them to assemble a navy in time to take out several Trellinese fleets still at anchor. Grand Duke Kenti of Ja'ekha, a Trellinese ally, occupied the Velaran city of Zarthalin on the Retikan coast, holding the port against several attempts to retake it. Assisted by armies including that of the Duke of Emla, Kenti gradually captured all Velar's mainland holdings for Elcmar. Trellin and its allies' victories on land were not matched at sea, however, until the navy of Arimathea broke Velaran maritime superiority in late 1769, in battle off Morikz, and so cleared the way for an army under Modriq, Duke of Lindros to land on the island of Napocis. They attempted to besiege the Velaran capital, Parthenope, but Miróist ships repeatedly ran the naval blockade until a Trellinese campaign on the island of Semeria captured Txir itself. During Miró's retreat from Txir, Prince Miró and his army withdrew to the south of the island, hotly pursued by the Earl of Jajich, and escaped by ship to Adazakh.

Prince Miró and his supporters capitulated in November 1771 after a lengthy siege at Teyra. On his arrival in Parthenope, Elcmar was crowned King of the Isles of Velar. Despite a number of rebellions over the next few decades, it was the end of an independent Velaran kingdom. Elcmar was succeeded in 1780 by his eldest child, Azara IV, who granted an amnesty to many Miróists and laboured to situate Velar sympathetically within her dominions.

In 1730, Elcmar, Duke of Palaegon, married Duchess Ícanta Evdar of Emla. The dukes of Palaegon were an offshoot of the Trellinese ruling house, House Kazdorir, called House Kazdorir-Tirika, and had become one of the leading families in the empire. The union with Emla made them second only to the monarchy in influence. When Duchess Ícanta died in childbirth Elcmar was left with only one heir - a daughter, Azara. In 1735, Tarien Fenyzómar-Ishta was crowned Queen of the Isles of Velar, and at a ball held shortly after she met Duke Elcmar. The two married in 1737 and she fell pregnant late the following year. In 1739, King Lonaki III died after a brief but severe illness, naming Elcmar as his heir. He was crowned Elcmar IV on 23 March, and Tarien gave birth to a daughter two months later. Another daughter and a son followed in 1741 and 1742.

Several Velaran nobles grew concerned at the idea that Tarien might be succeeded by Princess Azara, rather than any of her own children from the House of Fenyzómar. Believing that Tarien, younger than Elcmar by some seven years, would be predeceased by him, they were content to wait for him to die first so she could name her own heir from among her three children and keep the two kingdoms separate. This hope was crushed when, in January 1769, Tarien died suddenly at Mar'theqa. Accusations of poisoning — popular, but unsubstantiated — followed soon after as Elcmar claimed the throne, having already named Azara as his heir.

The unexpected death of Tarien sparked fears in Velar that their throne was implied in Princess Azara's succession. Hoping to dispel these concerns, a delegation of Velaran noblemen, headed by the Duke of Berú and Marquess of Teyra, approached Elcmar with a petition for him to pledge the restoration of Velar's throne to a Velaran ruler on his death. Instead, he refused their petition, and they returned to Parthenope in frustration. On 19 January they met together to select a nominee to claim the Velaran crown. They nominated Prince Miró of Txir, a first cousin of Queen Tarien, to take the throne.

The Trellinese consul at Parthenope, Feraan Periaci, urged Miró to decline the nomination, predicting that war between the two kingdoms would be unavoidable. Despite this, Miró declared the dissolution of the union four days later. Under orders from the Trellinese crown, Periaci personally delivered Elcmar IV's ultimatum, which Miró summarily rejected, and thus began the war.

Velaran naval power had been in decline for several decades by the late 1760s. At the outbreak of hostilities, the nobles gathered at Parthenope concluded that the defence of their realm depended on neutralising the Trellinese presence in the Sea of Velar. Warships under Velaran flags left port on the same tide as a courier bringing news of Miró's response to Mar'theqa; these ships made for ports around the Sea of Velar and conducted a series of raids on Trellinese fleets at anchor, crippling dozens of vessels in the space of days. This left Trellin at a disadvantage at sea for most of the first year. 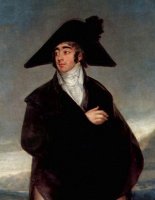 Trellin was instead forced to focus on occupying Velaran possessions on the mainland, in the provinces of Pelna and Retikh. Kenti of Ja'ekha was quick to declare his support for Elcmar's cause, gathering an army at Meharz before advancing into Retikh. The Battle of the Fords of Flotir was the first major land engagement of the war, with Kenti's 26,000 men overwhelming the Miróist army assembled under Atnas Laidakon. He encountered no further serious resistance until his siege of Zarthalin which, to the alarm of Miróists throughout the region, fell in under two months. Armies led by the Duke of Emla and Earl of Jajich, meanwhile, made major gains in western Pelna, much of which had sided with Elcmar at the start of the war. The capitulation of Luqarn to a Jajexan army was characteristic of the wave of success opened up by Kenti's victories in the east. A race to consolidate the mainland provinces ensued, with Laidakon campaigning in Pelna and his compatriot, general Kúfet Heruyel, pacifying Retikh. During this period, two attempts to remove Kenti and recapture the Retikan capital, first by Laidakon and then by both Laidakon and Heruyel together, ended in failure, and the two generals retreated in the face of Emla and Kenti's approach. They were cornered near Vrinon Pelna and made their stand in the Battle of the Plain of Marúna, one of the most significant battles of the war, fought over four days. Despite ending with a Ja'ekhan-Trellinese victory, the bulk of the Velaran army was able to flee and assist Prince Miró on the island of Semeria.

Naval campaigns and the war in the Isles

The theatre in the western Sea of Velar remained quiet following the initial raids by Miróist fleets. Its local naval capabilities crippled, Trellin was reluctant to send ships in insufficient numbers to ensure their safety. This allowed the Velarans time to consolidate their large manpower base in the Isles, although the uneasy peace starved Miró's cause of opportunities for victory in battle — victories he desperately needed to maintain his support and considerable armies. As 1769 wore on, his advisors grew increasingly concerned about his dwindling coffers. In August, the Prince of Tavlar looted Briedh, in nearby Më'idan, to fund the war effort. Although this staved off bankruptcy, it dashed Miró's hopes of winning support from the Trellinese colonies.

By November, the Trellinese and their Arimathean allies had mustered two dozen ships of the line, and over a hundred smaller craft including forty transports, at Tanzigar. This fleet departed on 5 November, led by admirals Kerhnai Eloradi of Arimathea and Tizarek Er'hani of Trellin. They paid homage to King Elcmar at Palaegon in Idisamo, where he was wintering, before travelling due south to Morikz, where the bulk of the Velaran fleet lingered to prevent Trellin from relieving the Siege of Vacoas commanded by Tavlar and the Marquess of Teyra. Admiral Ransal Vilursa, with sixteen ships of the line, ultimately intended to loot the ports of eastern Jajich but was awaiting the arrival of more transports. Eloradi's scouts spotted Velaran warships east of Morikz on 13 November and pursued them briefly westward. Surmising that they were regrouping with the Vilursa's fleet, the combined Arimathean—Trellinese fleet took pains to ensure it remained together when it drew near to the Velaran anchorage by Kalodin on 15 November. The clash between the two fleets was the largest naval action of the war, with eleven ships sunk out of the thirty-nine that saw battle, and ended in a decisive victory for Trellin. Vilursa was forced to withdraw; and, when news of the defeat reached the armies besieging Vacoas, the Velarans decided to abandon Morikz entirely. 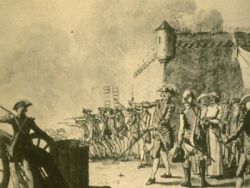 The Velaran garrison sallying forth during the Siege of Parthenope

Kalodin entirely changed the direction of the war. Velar's naval power was now broken, paving the way for Trellin to land large armies on Napocis. By January 1770, there were roughly 55,000 Trellinese troops on the island, fighting sieges at Styuno, Qaina and even the Velaran capital of Parthenope itself.

Both claimants to the throne recognised the importance of establishing their legitimacy in the public imagination. They each commissioned several artists and illustrators to accompany their forces in the field, leading to a large number of images of the war making their way to the nations' capitals. Fascination with the war persisted for decades afterward, and it remained a key theme in Trellinese and Velaran art until the 1840s. The most notable artist of the era was Kaúnú Tiqira, whose father had fought at the Siege of Teyra. Tiqira, educated in history at Parthenope and in painting at Mar'theqa, captured many of the episodes of the war in his popularly-acclaimed series of paintings, On the Great Velaran War.

The war was a popular subject for Trellinese film soon after the medium's arrival, around 1910. Miró's Great Campaign, a 1914 production, was the first feature film to depict the conflict, followed in 1916 by Limiykla's Tryst (named for the battle) and in 1919 by To Claim a Crown. A number of other films, now mostly lost, preceded To Claim a Crown, but this one hundred and fifty-minute film, released to celebrate the 250th anniversary of the outbreak of the conflict, became the 'definitive' film in the genre and stifled further productions. Depictions of the War of the Velaran Succession saw a resurgence during the Trophy Wars, as did films on the Namijan explorers in Andamonia, but it fell out of favour in the following decades. A number of films were released between 1969 and 1971 for its 300th anniversary.

A live-action television series set against the backdrop of the war is expected to premiere in early 2017. Haywire Studios, a Cadenzan film company, has announced an untitled release on the war for early 2019.

Retrieved from "https://iiwiki.us/mediawiki/index.php?title=War_of_the_Velaran_Succession&oldid=329889"
Categories:
This page was last edited on 29 March 2021, at 02:45.
Privacy policy
About IIWiki
Disclaimers