Kiyortza, formally the United States of Kiyortza (Kiyortzani: Kiyortzani Linsori Vyarikin), is a nation primarily located at the northwestern tip of mainland Thuadia on Anteria, sharing a land border with the nations of Aleni to its northeast, Rvandonia and Vescarium to its east, Fichmanistan to its southeast, and bordered to its west and north by the Paisi and Rimidic Oceans, respectively. Its territory also includes the islands of Irkȳlis and Nikorva in the Laurentine Gulf, a semi-autonomous territory of the nation. The country spans a combine total of about 1,660,501 km2 (641,123 mi2), and hosts a population of about 192.4 million people (as of 2019). Kiyortza is a federal democratic republic with its capital in Kittalor, a mid-sized city located on the west coast of the Kiyalvar Peninsula, while its largest cities include Lorzik, Kanistriy-Si'itivu, Sivordjika, Ifuksiyaf, Rȳkiri, and Noriyaka, among many other of the nation's cities.

With its warm and suitable climate for farming, the region of Riyasza in southern Kiyortza was thought to be one of the earlier places where civilization first emerged, with significant settlements dating back as far as 6000-7000 years ago alongside the Noriya and Kaprisz Rivers, forming early empires by about 1500 BCE. Later expansions of the Kapriszi spread the empire's technologies all about the region, with one such being the northern Itikovi River Basin, which alongside the emergence of the Vishkali even further north in western Kiyalvar, would lead to the next millenia of regional infighting and conflict. From the 6th to 17th centuries, the major regional powers - The Kapriszi, Itikovi, Vishkali, and later the Kisautri - were in near constant conflict with one another for territory, while eating up nearby smaller city-states one by one, leaving only those most resilient. By the 16th and 17th centuries, those in charge of said empires were increasingly open to discussion, primarily by revolution or election, and peace was finally established between the four major powers, eventually leading to the confederation of Kiyortza in 1769 with 19 provinces and the territory of Irkȳlis.

The next century would mark a time of unprecedented peace and prosperity for the nation, with a population boom spearheaded by immigration, and the addition of a 19th province that is Zefroda. Following that, however, natural disaster, political turmoil and the rise of regional secessionism would send the nation into a 4 year long civil war, leading to major loss of life, and be one of the causes for the later secession of the province of Timinse-Astariya. After the civil war, the nation saw drastic improvements to its political system amongst a general improvement to quality of life, under the leadership of Kiro Arkotas.

Today, Kiyortza is one of Anteria's most free and developed nations, with high quality of life and many freedoms, alongside being an innovator in science and many technologies. The nation's citizens are offered many services, including public healthcare, social security, and free education, amongst other benefits.

The name Kiyortza is thought to have originally been derived from Kivorsza, the name for a region in western Vinankosza, which itself likely derived from Early Riyaki ikiy-vori-sza, or West of Mountain Land. The term was likely spread by regional trade, and Kiyortza was eventually used to describe all of the land west of the Vaali mountains, before being adopted as the name of the newly formed nation in 1769.

Kiyortza as a region is fairly diverse, and with it comes many conflicts. Despite the peace in current times, the region was quite turbulent in the past, and only with everyone coming to the table to talk did all the infighting end.

The First Treaty of Fukivapi

The Century of Peace

Kiyortza is located in the northwest corner of mainland Thuadia in the Western Hemisphere of Anteria. The nation as a whole is fairly hilly and mountainous, with hills and mountains lining many of the nation's borders and coasts. Kiyortza's location at the tip of Thuadia-Thrismari allowed for it to flourish as the epicenter of global trade prior to the construction of the canal at Cerisium, and to this day still allows it to remain fairly influential over trade.

Kiyortza is a mountainous country, with many mountain ranges across the nation. The main range dominating the nation would be the Vaali Mountains, which occupy much of the nation's east. The Fukūlyi Range, an offshoot of the Vaali Range, acts as a divider between the watersheds of the Alf & Kaprisz Rivers, while the Zefrona Range separates the Itikovi River from the northern Zefroso-Astari Valley. In the north, the Vishkal-Patikyi Mountains makes up the bulk of the Kiyalvar Peninsula, and the mountains of Djinat makes for its many fjords.

The tallest peak in the nation, Sorzani Varȳ, often referred to as just Sorzani, has a height of 5,827 meters, which alongside many of the nation's other tall peaks, is located on the eastern edge of the province of Rȳikoza, bordering the nation of Rvandonia. Sorzani is the tallest peak in northwestern Thuadia.

The Itikov, Alf, and Kaprisz Rivers form the core of the nation's mainland area, and are important routes of cargo transport even to this day. Up in the Kiyalvar Peninsula, the Aris and Patiklya Rivers feed into Lake Loryis, the largest freshwater lake in northwestern Thuadia, while the Kayitz River acts as an important waterway in eastern Vishkara.

Kiyortza hosts a wide range of climates, from the frigid mountains of the Vaali Range to the dry deserts of southeastern Virtasza, though in general the nation is split between the temperate oceanic zone in the north and warm-/hot-summer Mediterranean in the south. Ample rainfall is recorded across most of the nation, though due to climate change the south has been receiving less rainfall overall than in the past.

The Kiyortzani populous is primarily atheistic/agnostic, and while religious freedom is a basic right, uncalled for proselytizing is generally looked down upon in society. Rationalist religions such as Solarism are generally encouraged over other religions, while Samiism and [Riyaki Folk Religion] are the most common religions. WIP

Kiyortza has a diverse set of exports, though it lacks in certain resources crucial in certain production processes. The nation's major exports include many metals and alloys, civilian and commercial vehicles, electronic components, and many food items. Kiyortzani products are generally of higher quality due to general work ethic and modern processes. Despite the relative richness of certain materials in the nation, environmental protection laws tend to make the process of extracting ores more tedious, though that tends not to hinder large companies by much.

On the other hand, the nation has a relative lack of certain basic materials, including aluminum, copper, and fossil fuels; the nation's pharmaceutical industry is also relatively basic, generally using foreign imports.

The nation uses the Kiyortzani Kiyorsi (KYI), which currently exchanges at a rough rate of about 1.32 ACU per 1 KYI. The currency was created with the Second Treaty of Fukivapi in 1769 as a uniform currency to promote trade between the regions, which all had separate currencies up until that point. 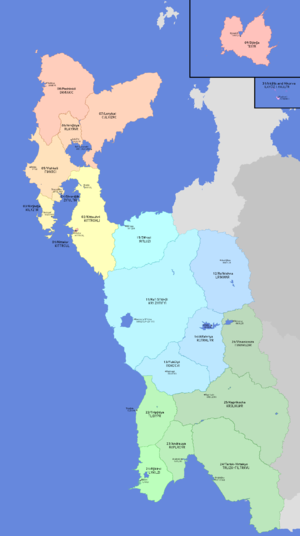 Kiyortza is comprised of 19 provinces, a capital region, and an island territory, with its 3 main regions acting as subdivisions between the administrative regions. The list down below is organized by area code.

National Highways uphold a national standard in road quality, generally 4-lane highways or wider, and spans the country, acting as Kiyortza's main arteries for long-distance road travel. They are numbered 1 through 14, generally with the north-south spanning highways being odd numbered and vice versa, with two short extensions off of highways 3 and 7, labeled 3A and 7A; highways 2 and 13 also happen to overlap with highways 1 and 7 respectively for significant parts of its length, while for signage the mileage of the longer highway overall takes precedent. They are usually referred to as "KN-[number]", KN standing for Kiyortza Nashakir, meaning "Kiyortza Highway".

Provincial Highways don't uphold any specific standards, being maintained by their respective province, though they are usually always the most important roads in a province, and can be anything from a two-lane road up to an arterial highway. Their numbering and signage is dependent on their respective province, and is usually referred to by their province's two-letter code and its number. (For example, Kisautriya Highway 56 is usually referred to as KS-56)

Local roads are ones not under any of the two previous distinctions. Depending on region there may or may not also be county roads upkept by their respective county with their own signage.

Kiyortza has a relatively well-developed modern rail system, with an extensive rail system across the nation. In the less densely populated regions of the nation, both freight and passenger trains often run on the same tracks, while in the more densely populated regions there are often separate high-speed rails with separated freight lines and stations.

A substantial portion of the power output in Kiyortza are delivered by the many thorium reactors about, with the most of the rest delivered by various renewable energy sources and uranium reactors, with only a small portion of energy generated from burning fossil fuels. The reason for this is mainly due to the fact that despite Kiyortza's abundance of many natural resources, there are fossil fuel deposits present in the general area, making finding alternatives much more lucrative. There is ongoing research and development on fusion energy as a future alternative from nuclear fission, which tends to produce highly radioactive nuclear waste.

Retrieved from "https://iiwiki.us/mediawiki/index.php?title=Kiyortza&oldid=359577"
Categories:
Hidden category:
This page was last edited on 15 June 2021, at 05:10.
Privacy policy
About IIWiki
Disclaimers