Fichmanistan, officially the Kingdom of Fichmanistan, is a unitary constitutional monarchy located on the continent of Thuadiaon Anteria. Fichmanistan shares a border with Shadoveil to the east, Bretislavia to the south-east, Playorasia to the north, Kilowatt to the south-west and Velnotia to the south. The country is divided into 25 administrative regions known as Counties.

The Kingdom of Fichmanistan was founded in the summer of 1701. The state was created after the Union of Spovmanistan with Rifzid in 1701. The monarchy held absolute control over the country until 1921 although in practice a monarch hadn’t interfered in politics since 1845. The King in 1921 was king John IV, and when the constitutional amendment to restrict his power was passed he welcomed the legislation. In 1932 King Robert II began his rule. Robert was a very different man then his uncle, as Just a year into his reign he abolished the parliament and the position of Prime Minister. This was a breach of the 1921 constitution amendment. The people were outraged and in the spring of 1934 they launched a revolution. The leader of the revolution was a man named John Arnold, who after winning the two year war named himself president for life. While alive he set up a presidential republic, with the president being head of government, state and the armed forces. John Arnold died in 1948 and was replaced by his Vice President: Éamon O'Beirne, who set up term limits and organized elections. The Monarchy was again established in 2021 after a referendum. The president is no longer head of state but head of the government and head of the armed forces. 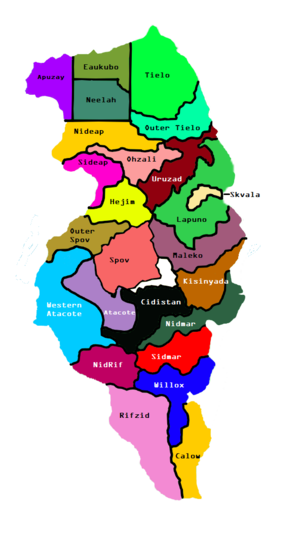 Map of the subdivisions of Fichmanistan

The Kingdom of Fichmanistan has 24 counties and one semi autonomous region. Each County has an assembly which is responsible for; housing, planning, roads, environmental protection, fire services, waste collection and maintaining the electoral register. The counties of Fichmanistan were created in 1987 to delegate more power down and reduce the size of the National Government. The reason for this was that the president at the time was Lillian Hakkan, a member of the socialists of Fichmanistan (now defunkt) had promised to decrease the national debt. The 25 counties of Fichmanistan are in order of population: Sideap, Skvala, Tielo, Nideap, Maleko, Kisinyada, Nidmar, Sidmar, Willox, Calow Rifzid NidRif, Western Atacote, Atacote, Cidistan, Outer Spov, Spov, Hejim, Apuzay, Eaukubo, Fadistan, Outer Tielo, Uruzad, Lapuno and Ohzali The Semi-Autonomous Region of Tielo is sometimes listed as one of the 25 counties, It should be noted however that Tielo Grand Assembly has far more powers than any other county assmbly such as control over taxation and education. 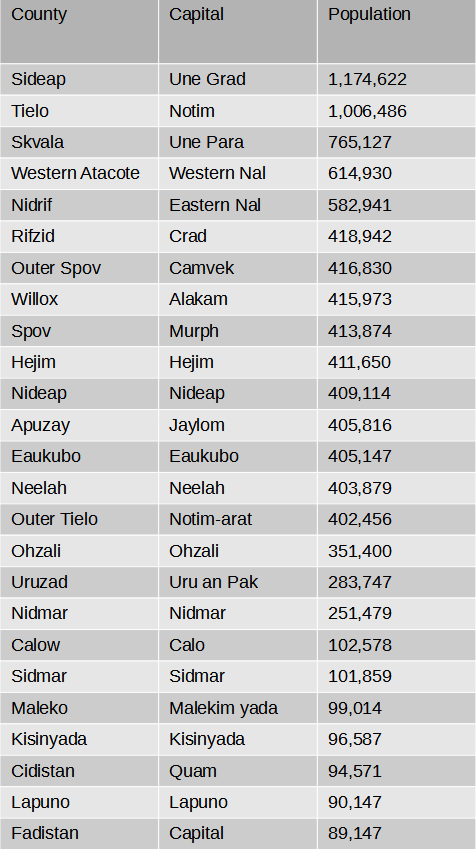 The Kingdom has been Neutral in all military conflicts since 1919, and so has significantly scaled back on military spending. Although the military is comparably smaller than other nations' its worth noting that because of recent purchases the Fichmani military are extremely well equipped. Fichmanistan has a defense force of 21,631 soldiers. The army currently has 15,657 active soldiers, While the Navy and Air Corps have 3,656 and 2,575 active soldiers respectively.

The Kingdom of Fichmanistan follows a unique style of government in which it has two powerful and equal heads of states. The first is the President, who is elected by the people every six years, in accordance with the 1949 constitution of Fichmanistan. The second head of state is that of the King. The King has been the co-head of state since the eleventh amendment to the constitution in February of 2021. 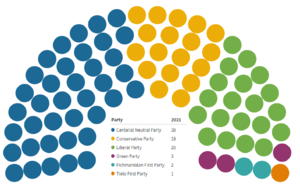 The Kingdom of Fichmanistan, has been ruled by the Fichman Dynasty since the nations formation in 1701. The House of Ohzali has ruled since 1845. The monarchy was abolished in 1936 following the end of the Yellow Revolution in which the republicans won. The monarchy was re-established in 2021. All former Fichmani royal titles are not recognized by the Fichmanistan Government. The only royal titles currently recognized are that of king Robert III and his wife Julie, the Queen consort. Any children of the couple will also revive royal titles. The reason for not recognizing any other family members as royalty is because prior to the revolution, the royal family had grown to big and, because of their laving lifestyle put a strain on the economy. 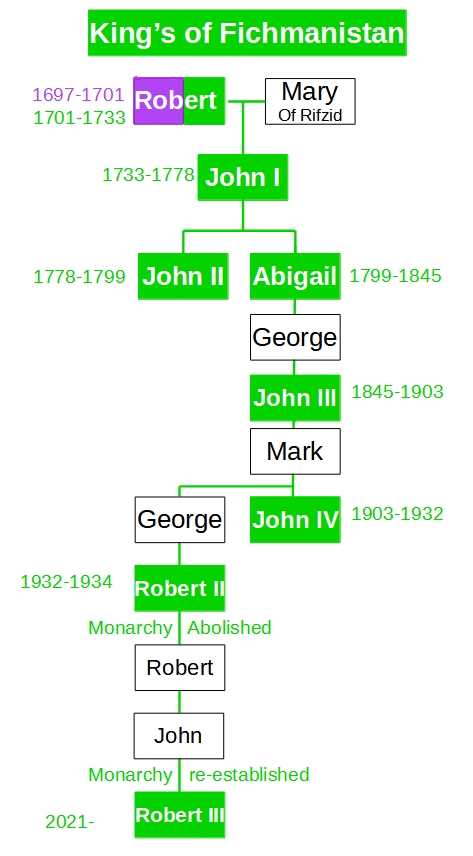 The climate in Fichmanistan is 39% a combination of arid and semi-arid desert, about 31% is some form of temperate (sub-tropical, temperate, and mediterranean climates), 25% is tropical savanna, and the remaining 5% is tropical. Of course as Fichmanistan sits on the equator the counties that lie on the equator are much drier and hotter (in general)

Fichmanistan is a sparsely populated nation in Anteria. While Fichmanistan is a naturally hot region containing a desert, oil was found in the 1970s giving the country free third level education until 2001. From 2001 the government could no longer afford to make all third level education free, as the oil deposits had rann out. Fichmanistan currently has some copper and zinc mines in Tielo but the practise is banned in the rest of Fichmanistan. The nation contains no gold or diamond deposits and so relies heavily on its low tax rates to attract foreign investment.

Retrieved from "https://iiwiki.us/mediawiki/index.php?title=Fichmanistan&oldid=349342"
Hidden categories:
This page was last edited on 16 May 2021, at 19:22.
Privacy policy
About IIWiki
Disclaimers