The Namkwon Emergency, also known as the War of Siamati Secession and the Namkwok Overturn was a Phoney War-era proxy war primarily involving Namkwon and Siamat generally acknowledged as lasting from 3 July 1945 until the Merdeka Accords of August 1957. This was following the Great War and was fought between Siamati republican nationalists, the Nguyen Dynasty, both supported by a coalition of Eastern powers, and the Namkwok Revolutionary Front, Songguo and Sangkha Volunteer's on the other.

After the end of the Great War, the Gaullican colonial territory of Siamat was annexed to Namkwon, which had long been a puppet state of Teutonia. The latter territory gained its independence from Teutonia in 1938 as a result of prewar arrangements, which allowed the Nguyen dynasty of Namkwon to consolidate their grip on power in Siamat. Siamati nationalists had hoped that Teutonian occupation would lead to independence, but instead they found their country subjected to another local power: attempts to enforce home rule were struck down by the Namkwok Imperial Army and calls for greater political participation were repressed. As a result, the Siamati independence movement abandoned traditionalist pretensions and waged a guerrilla campaign against the NIA, armed and trained by the Negaran Republican Army.

Siamati demands that Namkwon cede the entirety of ethnically Siamati territories went unheeded by Namkwon, but growing instability in Namkwon as a result of the spread of the Songhua revolutionary movement into the country, coupled with concerns that the destabilising situation in Siamat might lead to an eventual genocide caused the Negaran government to adopt an increasingly hawkish stance against Namkwon, culminating in the 3rd of July incident whereby the Negaran Republican Army invaded and occupied Namkwonese territories up until the Degar Highlands, and subsequently installed the Republic of Siamat with the aid of local forces.

The intervention aroused suspicion in the young government of Songguo, which feared Negara meant the movements as a precursor to a direct attack on the homeland. Songhua armies were mobilized and Songguo began lending large amounts of aid to the Namkwok Revolutionary Front to overthrow the Nguyen dynasty, resulting in its fall, and setting the stage for more direct opposition between Negara and Songguo.

On the 3rd of July, 1945, Negaran forces stationed along the border launched a surprise attack on Namkwon, swiftly moving into Siamat Province. Co-ordinating their offensive with a general uprising of Siamati partisans in the country, the NRA managed to rapidly take control of the key cities of Had Mai, Chiang Kaen, and Khon Yai as well as much of the frontier by the 4th, engaging and destroying active elements of the Namkwok Revolutionary Front in the area much to Tianjing's concern. After seizing the province up to its borders in the Degar Highlands by the 6th, the NRA presented both Songguo and Namkwon with a fait accompli, declaring a unilateral ceasefire and evacuating remaining NIA elements from the territory in short order.

Tianjing was quite alarmed over the Negaran invasion and the establishment of the new Republic of Siamat, and the Negaran invasion prompted the Songhua government to immediately ramp up aid to the Revolutionary Front. The already-beleaguered Nguyen dynasty had little ability to resist, and Songhua troops, under the direction of Marshal Lin Bian, began crossing the frontier into Namkwon in force to support the NRF. With increased Songhua support, the Revolutionary Front launched a major offensive, crushing the remaining NIA forces and forcing the royal family to flee into exile in Teutonia. 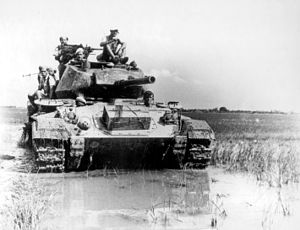 The NRA deployed many Asterian-made tanks.

Course of the War

Due to the recent intervention of both the NRA in Siamat and of Songhua forces in Namkwon, the situation along the Siamati frontier was highly unclear. Both Siamati and NRF border patrol units accused each other of crossing the border, and skirmishes between patrols were an almost regular occurrence. In addition to the growing tensions between the newly-minted Siamati Armed Forces and Namkwok Liberation Army, Songhua-Negaran relations had effectively collapsed over the issue of the NRA's treatment of NRF elements in Siamat: the SAF and NRA had branded the NRF in Siamat as a hostile terrorist organisation, and accordingly had been busily arresting and persecuting members thereof with the help of nationalist militias, which Songguo and the new Namkwok government perceived as an attack on their interests.

Allegedly in response to the persecution they faced, NRF cells in Siamat launched a general uprising starting in late January 1946, which developed into a series of protracted sieges of minor settlements and government buildings across the country. The main effects of the January Uprising were cementing anti-NRF sentiment among the general populace of Siamat (which had until then had generally been favourable to the NRF as an alternative to monarchist Namkwon) and the destruction of the NRF as a major political organisation in Siamat, although the uprising dealt a blow to the SAF both materially and morally.

The conflict might had ended there were it not for the supposed discovery of documents incriminating both Songguo and Namkwon as being deliberately involved in the planning and operation of the general uprising. The Diap files as they came to be known after their author are typically presented by Negara as the primary reason for the escalation of the conflict, but the validity of the documents is disputed both by Songhua and international scholars, who assert that there was no discernible link between the documents Diap Ming, the supposed ringleader of the NRF uprising, and either orders issued or actions taken by both the NLA and Songguo at that time. Nonetheless, as a result of the files, the NRA was ordered to mobilise in Siamat, and with the co-operation of the Siamati authorities, an ultimatum was issued to Namkwon by the 2nd of February.