Oseva, officially the United Republic of Oseva (Osevian: Zjednoczona Republika Osewa) is a country located in southern Pomria. It borders Dulebia to the north, Finium to the west and the TBD sea to the south-west. With a population of 44.2 million it is the Xth largest country in Slavia and Xth largest in the world. It's capital is Kaliga and its largest city is Darlowo.

The turn of the 20th century would see Oseva join the victorious Grand Alliance during the Continental War. The war devastated much of northern Oseva and left over 800,000 dead. Political instability followed with the emergence of powerful far-leftist groups and parties, who agitated for major constitutional, political and social change. Oseva's failed intervention in the Dulebian Civil War brought about plans for revolution. In 1924 the Osevian military decimated the would-be revolutionaries with the Ossova Massacre and Osevian Terror, which left up to 8,000 people killed or disappeared. The terror succeeded in calming Oseva's political situation and saw significant economic development. In 1956, following a series of scandals involving the monarchy, King Marijan II abdicated, resulting in a parliamentary republic. The new republic was fundamentally weakened by its constitution, resulting in revovling door of governments. Gripped by an economic crisis during the 1970s, Oseva received its first left-wing government in 1977, which was ultimately overthrown in 1979 with the military coup d'état. Between 1979 until 1984, Oseva was ruled under a military dictatorship, before a new constitution which significantly empowered and institutionalised the Osevian military was introduced. The new civil-military government instituted free-market orientated reforms throughout the 1980s and 1990s, greatly increasing economic growth and development.

Today, Oseva is considered a regional power in Pomria and is a member of XX, XX, XX and XX. Oseva has a developed market and has the XX largest economy by GDP (PPP) in Pomria and one of the most dynamic economies in the world, simultaneously achieving a very high rank on the Human Development Index. Alongside a developed school educational system, the state also provides free university education, social security, and a universal health care system.

Oseva has a total area of ‭588,665 km² (227,285 sq mi), making it the xth largest country in XX and xth largest in the world. Located in southern X, it is bordered by Finium to the north-west, Dulebia to the north and bounded by the XX Sea to the west and south-west. Much of Oseva's geography is defined by the Panleonian Plain, which provides Oseva's flat and forested terrain. Coastal Oseva is defined by its low-lying terrain and its numerous lagoons and bays. Northern Oseva is dominated by large tracts of farmland and forests, the largest being the Północny Zasięg.

Forests and pastures of the Północny Zasięg. 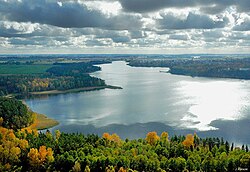 The Bzurian Lake District in northern Oseva, contains over 2,500 lakes 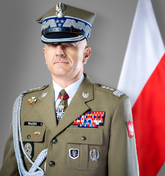 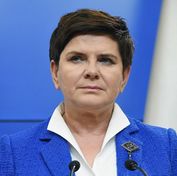 Osevian voters elect the lower-house of the bicameral parliament (the National Assembly), the 480-member Wiece. The upper-house is the 50-member Council of State which consists of senior military figures, and civilians appointed by the military. The Wiece is elected under proportional representation according to the d'Hondt method. The civilian members of the Council of State are selected by the Covenant Office of Appointments, they are mostly experts from key fields including business, industry, education, science and law enforcement. Civilians number 20 of out 50, with the remaining 30 seats allocated to military officers. Since 1995, Oseva has been considered a dominant party state under the Popular and National Revival Movement (Popularny i Ruch Odrodzenia Narodowego, PRON) which has dominated all levels of government uninterrupted. The NRM is noted to being deeply pro-military and subordinate to the junta through its National Covenant for Security and Prosperity.

The judicial branch plays an important role in decision-making. Its major institutions include the Supreme Court (Sąd Najwyższy); the Supreme Administrative Court (Naczelny Sąd Administracyjny); and the State Tribunal (Trybunał Stanu). The PRYNOR appoints all heads and justices comprising each court, while the State Tribunal exists solely to hear cases of violations of law or the constitution by elected officials, or people of interest. The State Tribunal has been criticised as a kangaroo court, used by the military to run televised trials against critics.

National Covenant for Security and Prosperity

The National Covenant for Security and Prosperity (Przymierze Narodowe dla Ochrony i Rozwój; PRYNOR), is the military council that acts of a "core half" of Oseva's executive branch. Headed by the Chief of State, it consists of 13 prominent officers from all four branches of the Osevian National Armed Forces. It is tasked with reveiwing all legislation, appointing the heads of state television, radio, the intelligence services, military appointments and promotions, heads of law enforcement and the Supreme Court. It has the power to dissolve the National Assembly, sparking an election at its own disrection or upon request of the Prime Minister. It also possesses a veto over cabinet appointments and all legislation produced in the National Assembly, it is also tasked with appointing the Ministers of Homeland Defence and State Security. Upon each election, the PRYNOR officially appoints the Prime Minister through the Chief of State. 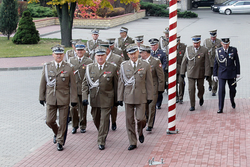 Members of PYRON during the opening of the National Assembly in 2017.

The PRYNOR under the constitution is not accountable to any body or individual and holds dominant sway over all areas of government policy, including national security, defence and foreign policy. The body may also assume complete executive control during times of national emergency or war. PRYNOR also holds significant influence of the nation's independent media through the Covenant Office for Information and Social Cohesion, which operates as a censor of printed, televised and digital media.

Since the 1979 military coup d'état, human rights in Oseva have been in a constant state of flux. During the military dictatorship period (1979-1984), the level of abuses exceeded most expectations and fears. Thousands of left-wing supporters were either imprisoned without trial, disappeared or killed. It is estimated that between 1979 and 1984, between 8,000 and 10,000 people were killed by execution or through extra-judicial violence. Following the establishment of the civic-military system in 1984, human rights improved, though remained significantly below pre-coup standards.

Today, Oseva ranks poorly compared to other Pomrian states and poorly in comparison to its neighbour of Finium. Osevian and international monitors regularly report abuses by the state, through the use of extrajudicial violence, the use torture, forced disappearances, excessive use of surveillance, and the denial of freedom of speech, freedom of thought, freedom of association and right to protest. Much of Oseva's violations are attributed to its draconian national security laws, that often exist to stifle dissent and criticism of the civic-military government, while officially, they exist to combat "extremist ideologies."

One of Oseva's weakest areas is freedom of speech and media freedom. Provincial and local governments have arrested journalists and closed newspapers that report on matters perceived as socially offensive or critical of the government or military. Journalists also have been victims of violence and intimidation by various groups and individuals. In spite of these difficulties, the press publishes freely on other matters, although journalists often exercise self-restraint in their writing to avoid inuring the wrath of the government or military.

Oseva is divided into eighteen districts (Dzielnica), prior to the 1985 reforms, it was divided through voivodeships (provinces), based on historic regions of the Kingdom. The new districts were devised to break up the connections to historical regions in an effort to suppress regionalist movements or identities that were emerging during the 1960s and 1970s. Administrative authority at the district level is shared between a government-appointed komisarz (commissioner), and an elected regional assembly (sejmik). The government-appointed komisarz heads the district executive and is often technocratic or non-partisan, while elected assemblies are partisan. The Osevian military has the final say on commissioner appointments, as such, 10 of the 18 districts are led by either active or retired military officers.

The districts are subdivided into poddzielnice (Sub-districts), and these are further divided into gminas (also known as communes or municipalities). Major cities normally have the status of both gmina and powiat. Oseva has 18 dzielnice, 400 poddzielnice (including 50 cities with poddzielnice status), and 2,981 gminas.

Osevian infantry during a wargame exercise in 2017.

Since 2001, the ONAF has been under going significant modernisation, with the introduction of new battle systems, including tanks, aircraft, artillery and unmanned aerial vehicles. Since 2008, the Army has begun receiving new small arms, anti-tank weapons and a series of new surface-to-air systems. Owing to the military's role in Osevian politics, it has been able to secure defence spending of 3.1% of GDP.