Skjordham, officially the Kingdom of Skjordham (Fjeldran: Kongeriget Skjordham), is a Nordanian nation in Esquarium. Skjordham is constitutional monarchy with a parliamentary democracy, the head of state is the King whilst the head of government is the Prime Minister The current ruling Monarch is King Sebastian I who assumed the throne on the death of his mother in 2014. The capital of Skjordham is Åleberg, a financial centre with an urban area population of 1.7 million, it is one of the oldest cities in Western Nordania and has the largest Airport in the country. Other major urban areas in Skjordham include Sognsund, Honningvik, Åndalske, Harsla and Varberg.

Skjordham borders Eldmark to the west and Sjealand to the north, x to the east and X to the south.

The Kingdom of Skjordham is a Constitutional Monarchy with a representative parliamentary government based on the Sjealandic Asgård System. The Skjordhanic parliament is called the National Assembly and convenes in the National Parliament Building in Åleberg, it has two houses the Landsforsamling and the appointed Nasjonalt senat which has no Political Parties.

The Skjordhanic parties currently in the Landsforsamling are: The Social Democratic Party, a Centre Left Socially Democratic Party who have been the head of the Ruling Progressive Coalition since the 2016 General Election. The Modern Democrats or MoDems are a centre-right Liberal Conservative party who have been in Government from 1992 to 2004 and from 2008 to 2016. The Liberal Party are a Centrist Party which was replaced as Skjordham's second Largest political Party by the Modern Democrats in the 1992 General Election, the party is also a member of the Progressive Coalition. The Átrunaðr Democrats is a Socially Conservative, Átrunaðr Democratic Party who are members of the official Opposition. The Conservative Party are a Centre-Right Conservative and Crovanist Political Party who are known for leading the first democratically elected government. The Progressive Party are a Democratic Socialist, Progressive and Environmentalist Political Party which has ties to the Skjordhamic Republican Movement and are a member of the Progressive Coalition. Frihedsforsamlingen is a Tynic Minority interest group and are a Socially Progressive party. The Union are a Right Wing, Nationalist party formed during the Anti-Government and Anti-Immigrant riots in 1982. The Green Federalist Party is an Environmentalist, Ecosocialist and Federalist party concerned with protecting the environment. The Change Skjordham also known as the Skjordham Party is a Centrist, Reformist Political Party formed after the resignation of Anna Olsen as Prime Minister and Leader of the Modern Democrats in 2007. Alliansen för Demokrati is a Bratten Minority party and Separatist Party which was formed following Peacetalks with the Provisionals and ended the 5 year long terror campaign in the country. 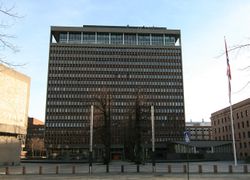 Office of the Prime Minister

Retrieved from "https://iiwiki.us/mediawiki/index.php?title=Skjordham&oldid=75011"
Categories:
Hidden category:
This page was last edited on 2 June 2019, at 14:17.
Privacy policy
About IIWiki
Disclaimers