19th-century depiction of Satrian merchants selling the contractual rights to a group of native Asterians to Soravian merchants. Satrian merchants, often from Kassar, were complacent with and participated in the system of native indentured servitude throughout the colonies.

Throughout the Soravian colonies in Asteria Superior, institutionalised slavery was present on both an economic and social level. While a fairly minor importer of Bahian slaves, slavery in the Soravian New World was maintained mainly through an extensive system of indentured servitude intertwined with the traditional hierarchy of serfdom.

Unlike its other colonial counterparts, Soravia relied heavily on the Native Asterian populations of both Chistovodia and Vinalia to form the bulk of its labour force. At first natives who attempted to rebel against early settlements in littoral Chistovodia were incorporated into slavery, which mainly included resource-gathering for town building, however following expansions inland after the Ten Years' War, this system and the native labour force was greatly expanded. Soravia de facto abolished the forced enslavement of Native Asterians in the 1636 Lyubarskaya Declaration, following international pressure, but maintained its network of native labour forces through the use of indentured servitude.

Laws passed by Grigori Kosh, who discovered Chistovodia and served as its first governor, refused to recognise natives as citizens or inhabitants of the colonies, and what is now known as the Kosene Laws set the precedent for the system of indentured servitude that succeeded the abolition of native slavery in the Soravian colonies. As natives were not nominally inhabitants or legal residents of the colonies, they were offered labour contracts in exchange for their "right of passage" into the colonies – in this case, it was to remain in the colonies – instead of monetary pay. Natives who rejected these contracts were sometimes killed outright, but more often they would be sent to large-scale native camps known as Provbudyn (from the Soravian проведення будинків, provedennya budynkiv – "holding houses"), where many would die from widespread disease as a result of their unhygienic and inhumane conditions. In most cases, indentured servitude was the greatest chance of survival for the native populace. Many native servants died as a result of diseases introduced to the Asterias by Eucleans, which sparked a rise in the import of Bahian slaves into the colonies (mainly in Vinalia), however the native population was large enough to partially recover.

Soravia banned the import of Bahian slaves in 1800, and a greater increase of white serfs from Soravia, particularly central Eucleans, entered the colonies under indentured servitude in the early 19th century. Bahian slaves were freed outright and their owners compensated in 1812, but the natives remained the colonies' biggest labour source. As Chistovodia moved away from mass production in the west and towards settler colonialism, many natives were transported to Vinalian plantations, especially in coastal Vinalia which had been acquired from Poliania after the Ten Years' War. The system of indentured servitude is the main reason for Vinalia's modern-day native population, around 15% of the country.

Indentured servitude under Soravian merchants and plantation owners resulted in many natives converting to Episemialist Sotirianity, most of whom attended church service on the command of their owners. Soravia's swift exit from the colonies following Chistovodia's declaration of independence in 1863 resulted in the emancipation of many of these natives from the contractual obligations by the 1870s, although their social caste under colonialism still led to mass discrimination and inequality amongst the native population compared to the Euclean settlers. The system of indentured servitude in the Soravian New World is often referred to as one of the most extensive and brutal forced labour systems in the new world, and is estimated to have directly contributed to the deaths of millions of natives during its almost 300-year-period of application.

Ideas of slavery in pre-colonial Soravia

Application of indentured servitude in the colonies 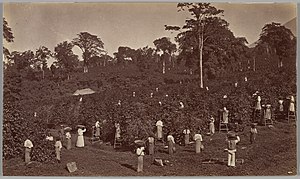 Upon gaining independence, and joining Chistovodia. Vinalia faced a shortage of low skilled workers for plantations, and mines, the emancipation of the serfs upon independence allowed large amounts of low skilled laborers to head into the urban centers. Vinalian plantations required the manpower to grow sugar, kokhineal, rice, among other crops, however the interest to grow coffee a more manpower intensive crop in Vinalian estates, only aggravated the labor shortage. To combat this the provincial government established the майно system, where the government would grant land to those which desired to establish a farm. To provide labor the "Trudivnks" usually former serfs or indentured servants worked to pay debt to the майно owner from who they bought food, and other basic items, along with paying for housing. To attract foreign workers and newly freed serfs in Soravia, tentative Trudivnk contracts existed for those arriving into Vinalia, however such lenient contracts were usually not extended to Vinakian laborers which had little choice in their work opportunities. Industrialization in the north demanded workers, which worked for set wages and attracted many former Trudivnks, however Vinakians usually found it hard to enter such positions and many in the north migrated to the south where the booming coffee business required more and more labor, as it was the only opportunity open to Vinakian laborers.

Trudivnk contracts were highly predatory specially towards Vinakians, which found it hard to find another occupation, and had to in various circumstances pass down debt to their children. Many Vinakians were relocated from майно to майно under the excuse of possible violence, which esteemed from fear of revolt. However issues of abuse of contracts, and low payments plagued the system, following the Great Collapse of 1913, the Vinalian agricultural sector was particularly hit hard, and the provincial government struggled to subsidize it's майно owning base and deal with the demands for higher wages in the Northern industrial sector. Many Trudivnk contracts were revised at the request of Mайно owners by local authorities, to the benefit of the owners, although this measures were called to be temporary many of this contracts only continued after the economy had recovered.

Retrieved from "https://iiwiki.us/mediawiki/index.php?title=Slavery_in_the_Soravian_New_World_colonies&oldid=272284"
Categories:
This page was last edited on 7 November 2020, at 00:09.
Privacy policy
About IIWiki
Disclaimers