The Städ War (Geatish: Städkriget, lit. "the Anvil War") was a war fought in Geatland from AD 942 to 944. Fought primarily on the island of Gormö, it is the first non-legendary war fought on Geatish soil.

In 929, Gorm the Elder, a Geat, became king of Lågland. During this time, weaker Geatish and Gutish kingdoms and lands were being raided and pillaged by Ghaillish pirates and the Ghaillish raider kingdom on Gormö's north. Seeking to ward against the Ghaillish threat, Gorm orchestrated the unification of less powerful Geatish lords under him in 941. The Gutes, a distinct tribe, refused to unify with Gorm, sparking conflict.

Although skirmishes were present as early as 939, the war formally began in 942. The Gutes were led by Harald Halstensson, King of the Gutes, and were informally supported by Ghaillish pirates hoping to stop Geatish hegemony. The war was primarily fought on land between the hirds of each king, though there were skirmishes at sea. Gutish forces were initially victorious, but much of the army was decimated in the Battle of the Blue Cliffs, where Halstensson lost his life. The Gutish lords formally swore fealty to Gorm soon thereafter. The war had the effect of establishing the First Kingdom of Geatland and finally subjugating the Gutish tribes under the Geats. 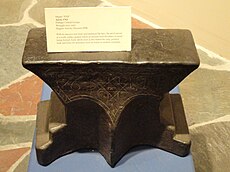 Städ is Geatish for "Anvil", and thus a common translation of the war's name is "the Anvil War." The origin of this name is unclear, as the war was only referred to as such about fifty years after its conclusion. One theory says that Städet ("the Anvil") was a commonly applied moniker to one of the war's military leaders, most likely Harald Halstensson. This is not substantiated in any primary source document. Another theory says that the war is so named because it represented the first time that weapons were forged on a mass scale, with anvils being a component in the forging processes. This does not appear to be correct, however, as bladework was popular on the Geatish Islands as early as the 2nd century AD, and there is no evidence that it increased markedly during this period.

Other theories that Städ may not axtually refer to anvils per se, but may be a reference to or a clipping of a town name. There is no evidence of this theory either.

Ghaillish pirates were a serious threat to Geatish lands. They were the primary factor that pushed for Geatish unification.

By the beginning of the late 8th century A.D., Ghaillish pirates began conducting raids on the Geatish Islands. These pirates, whose origins are modern-day Caldia, were often sponsored directly by the Ghaillish monarchs, though other times they were taken upon without monarchical approval. As Ghaillish pirates bore into Geatland, they pillaged and often razed towns, killed men, and took women and children as slaves. In the place of the areas that they pillaged, Ghaillish pirates would set up raider kingdoms that acted as a base of operations for raids against the whole island. These raids and raider kingdoms were not unique to Geatland; they could be seen as far south as modern-day Estmere.

In response to the raider kingdoms, many of the Geatish chiefdoms and kingdoms began to unite. The reasoning for this was quite simple: no one Geatish territory was strong enough or well equipped to stave off the Ghaillish onslaught. If the groups acted in concert, however, they could pose a much more serious threat. The Gutes, a kindred tribe of the Ancient Geats, had already in 890. Therefore, the Geats faced enemies on both the Ghaillish and Gutish side. The growing power of the Gutes was of particularly concern, as throughout history the Gutes had typically been a subordinate tribe to the Geats. The Geatish territories remained in discord, and still none could pose a credible threat.

Gorm the Elder, king of Lågland, precipitated the unification of the Geatish tribes in 938.

In 929, Gorm Björnsson, who would later adopt the epithet "the Elder", became King of Lågland. Although rather small, Lågland was the most powerful of the Geatish kingdoms, and its rulers were therefore the natural pick for kings of all the Geats. Unification of the Geatish tribes was a thing of legend, having been endeavored by Alrik in the 1st century AD. Since then, the Geats had been perpetually disunified. Gorm was inspired by the aprochryphal story of Alrik's conquest, and he saw himself as a natural extension of Alrik's legacy.

Gorm first attempted to sally into Ghaillish lands, but he was unable to do stave off the superior Ghaillish forces. Disguntled, Gorm looked toward unifying the Geatish tribes. Together, Gorm reasoned, the Geatish tribes would pose a more significant threat to Ghaillish menace. Gorm negotiated the unification of Geatish tribes under his banner by 938, cementing himself then as the informal "King of the Geats."

The Gutes, however, elluded Gorm. The Gutish king, Harald Halstensson, repeatedly rejected offers to unifty under Gorm's spectre. Although the Geats were doubtless a stronger force than the Gutes, Halstensson's power was bolstered by his securing the support of the Ghaillish pirates. The Ghaillish, fearing the growing power of Gorm's forces, saw an opportunity to pit the two tribes against each other. Halstensson initially proposed to fight alongside Gorm as an equal, but Gorm rejected this offer. Gorm attempted further negotiations, but these broke down in 942. The two powers were soon at war.

Both Gorm and Harald fought not in terms of formal armies, but in hirds. A hird was the informal armed retenue of the king or ruler. Hirds typically had allegience to a ruler and not their state, and owed that allegience as a result of bloodline or tribal relations rather than a shared understanding of being a citizen or servant of the state. To keep resistence at bay, these hirds would have to paid lump sums; therefore, they were more like mercinary armies than the standing army of a state or a knightly class as was seen in mainland Euclea.

The exact number of combatants on each side varies from text to text and is sometimes woefully exagerated. What is most clear is that Gorm's forces outnumbered Harald's. Most modern estimates guage Gorm's army to have comprised forty-four thousand men, while Harald had a retenue of thirty-two thousand men. As the Geats were, by 942, more organized and centralized than the Gutes, this makes sense. It is considered by some sources that Harald may have conscripted forces from neighboring or even neutral towns, though the exact system that Harald used to go about gathering these soldiers is lost to history.

Naval battle between Gutes and Geats during the Städ War, ca. 943, resulted in many of Gorm's best ships being sunk.

Heavily fighting between the Geats and Gutes began as early as 939, though these were typically temporary skirmishes or raiding party operations. Most historians agree that fighting began in earnest around April 942, though both Gorm and Halstensson began mobilization about two months earlier.

The first eight months of the war saw little success for Gorm and his forces. Because the Gutes were concentrated in highland areas, they were typically difficult to access. Furthermore, bombardment by Ghaillish pirates acting as allies of the Gutes weakened Geatish supply lines and wore thin soldiers' resolve. Roughly around January 943, Gorm's forces made battle with a Gutish naval convoy. Although the battle was a stalemate, it destroyed many of Gorm's best ships and emboldened Harald's forces.

Numerous times did Gorm consider suing for peace with Harald in the hopes of forging an alliance against the Ghaillish pirates. It is possible that Gorm sent one such offer, but that Harald refused. Whatever the reason, Gorm decided not to pursue peace and continued to press attacks against Harald.

News of the war reportedly reached mainland Euclea by November 942. 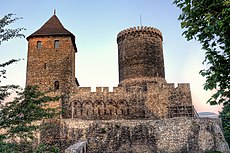 Esholm Castle, the seat of Gorm's military operations and government during the city's seige

The Siege of Esholm sometime in February 943 marked Gorm's long-awaited first victory. Esholm, Gorm's capital, became the target of Harald's forces. Halstensson, who had grown increasingly prideful after defeating or routing Geatish forces elsewhere, made an attempt to capture the city. Gorm, who was walled in Esholm at the time, ordered for the portcullis to be drawn and for archers to assemble on the city walls. Halstensson, who had no seige equipment, nevertheless attempted a charge that culminated in heavily losses on his front. Halstensson endeavored to starve the city, but supplies were still able to enter and exit the city through its ports, which Hlastensson was unable to blockade.

Meanwhile, Halstensson's own army was depleted and its supply lines were running thin. Constant abuse by Geatish night raiders and the onset of disease forced Halstensson to recall his troops and bank away from Esholm by August 1943. The crucial time Halstensson's army spent sitting idle in Esholm allowed Gorm to regroup and reform his men. It therefore marked the key turning point of the war, spelling the doom of Halstensson's army and the triump of Gorm's.

Battle of the Blue Cliffs

Location of the Battle of the Blue Cliffs today.

The Battle of the Blue Cliffs began in April 944. Gorm's army outnumbered Halstensson's about two-to-one, though some sources deflate the size of the Geatish forces. The battle mainly took place in a dale some thirty miles away from Esholm. This dale was surrounded by a range of tall hills known as the "Blue Cliffs," whence the battle's name.

Most accounts detail the battle as having taken place over the span of a day, with light skirmishes the day before. Halstensson made camp near the center of the dale, judging the tall hills around his location to provide good enough protection against a flanking maneuver. In practice, Halstensson's decision to encamp his army so tightly in the dale meant that the army had little breathing room and its maneuvering capabilities were blunted. Gorm, on the other hand, made camp at the mouth of the valley, blocking Halstensson's way.

Depiction of the killing of Harald Halstensson in the Battle of the Blue Cliffs. The eponymous blue cliff can be seen in the background.

The battle officially began when Gorm sent out a small skirmishing force to goad Halstensson's army into offensive maneuvers. Gorm's strategy worked, as Halstensson marched his men up to Gorm's position in a frontal assault instead of taking the defensive position. Gorm's superior manpower pushed Halstensson's forces back into the dale, inflicting heavily losses. Simultaneously, Gorm arranged for archers to take up position in the hills and fire against the Gutish troops. When the first volley of arrows hit, Halstensson's forces were caught completely unawares and scrambled. Halstensson was slain in the ensuing panic. Some writers recount that Gorm himself slew his principal rival, though this is likely embellishment. The battle was won after only two hours fighting, and it saw the deaths of over fifty percent of Halstensson's fighting force.

Skirmishes would continue on until August of the same year, when most historians consider the war to have officially ended.

The war was a victory of Gorm the Elder, whose triumph in battle convinced the Gutish leaders to surrender and swear fealty to him, though some leaders held out as late as 945. Halstensson's forces were decimated, suffering 23,500 losses in an army of some 32,000. To this end, Gutish military strength was destroyed, and the Gutish hird was incorporated into Gorm's army.

Retrieved from "https://iiwiki.us/mediawiki/index.php?title=Städ_War&oldid=233819"
Categories:
This page was last edited on 3 August 2020, at 05:33.
Privacy policy
About IIWiki
Disclaimers