Yohannes is an island country located in the northwestern Noctur region. It is the origin of the Financial Revolution, allowing its navy to guarantee the Rule of Law in its maritime trade and investment routes with over 400 World Assembly (WA) member states and non-member countries.[1][2]

A largely isolationist country, Yohannes was commended by the World Assembly in 2014 for its role in international commerce and its extensive diplomatic ties.[3]

Geographically, Yohannes is a continent of three main islands and their surrounding small islands. Politically, it consists of 19 constituent countries.

The three kingdoms of Alexandria, Burmecia and Lindblum have more people and area than the other 16 countries combined—they are the three dominant states in Yohannes. Territories are not necessarily contiguous, such as the Noble Republic of Treno—red, northeast of the Kingdom of Burmecia—their non-contiguous territories resulted from historical acquisitions, or in the case of the Grand Duchy of Kradenmark, divisions of the ruling family trees. Some of the smaller constituent countries, such as the Grand Duchy of Donata, are still entitled to enjoy all the privileges of controlling their own army, post office, railways, and nominal taxation rights. 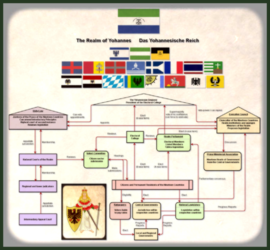 An illustration of the political system of Yohannes.

Yohannes is a monarchy in name, but a presidential democracy in practice. According to the second introductory principle of the Three Executive, the Yohannesian Emperor is the head of state of the Nineteen Countries. The Fifth Amendment ordains that the Emperor is a president in anything but name, with the title "Yohannesian Emperor"—an elected emperor in Yohannes—chosen to appease members of the sovereign faction during the Founding Monarchs days, who would never accept subordination to an "Emperor of Yohannes" or an "Emperor of the Yohannesians." According to the first introductory principle of Limited Separation of Powers, governance in the Nineteen Countries can be divided into three parts: the Executive (the Emperor, Chancellor, and Ministries of the Realm); the Legislature (the Electoral College and Parliament); and the Judicature (the Justices of the Peace).

The second introductory principle said, “It has to be noted that even today, the Emperor has very extensive powers, on paper, but they cannot be exercised freely—and in the case that this tradition is broken, the unfavourable reactions of the people, which include those elected Parliamentary Members, would convince the offending incumbent to immediately submit themself to public scrutiny, if she or he has not resigned already.” The Emperor has a number of important duties and functions: the administration is done in their name, appointments of judges and nation-state machinery are made under their name, and every Bill must have their Blessing before it could be turned into an Act or law of the land. In practice, however, if the political party of the Emperor is not the party of government, as a leader of the Electoral College but not leader of the Realm Parliament, the Yohannesian Emperor is nothing but a lame duck president. This is because of the messy and error-ridden system of governance in the Nineteen Countries, where the original system of checks and balances of the old constitution, as written by the Founding Monarchs, had failed to take into account the economic, political and population growth of a future nation-state.

The Emperor is therefore bound to take into account the advice of her or his Ministers, led by the Chancellor of the Nineteen Countries. The Chancellor is not elected by electoral college vote, but by popular vote in the Nineteen Countries. To complicate things further, the Speaker of the Realm Parliament is more often than not a member of the Opposing Forces, because the independent faction in Parliament, representing the smaller countries, would not allow complete domination of the Executive and the Legislature by any one political party at the federal level. In the rare situation where the Office of the Emperor and the Office of the Chancellor are won by candidates from the same political party, none of the above constitutional limitations would apply; in which case, in theory, real power resides not in Parliament but in the persons of the Emperor and the Chancellor, with the Speaker of the Realm Parliament and the Opposing Forces flanked on both sides of executive and legislature by the party of government. Under normal circumstances, however, members of the majority in Parliament alone—and thus more often than not the person of the Chancellor—have the initiative to turn laws into reality, levy taxes at the federal level, and to provide the money that keeps government functioning. 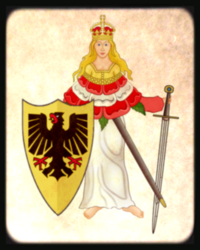 The Black Hawks and Claudia, the most potent symbols of parliamentary authority in the realm

This is where the de facto reality of party politics replaces the de jure structures of the constitution. For the ascendancy of Parliament, in accordance with the third introductory principle of The Will of Parliament, means in practice the ascendancy of the majority in Parliament, and so, in theory, the majority of the popular vote of the people in the Nineteen Countries. According to Section Four, Point Five: Previous Electoral Amendments, the modern Nineteen Countries has practical general suffrage. Every four years, elections to Parliament, and thus the Office of the Chancellor, are held. Every eight years, elections to the Electoral College, and thus the Office of the Emperor, are held. With very few exceptions, most collegian district and parliamentary electoral candidates are members of a political party. The Yohannesian Emperor, representing the majority in the Electoral College, has legislative review and veto capacity. The Chancellor of the Nineteen Countries and members of each party in Parliament form separate Caucuses. From the Caucus of the party in government, individuals are chosen to become members of the Executive Council—or government cabinet—where they will then become the political heads of the assorted government departments and ministries at the federal level. 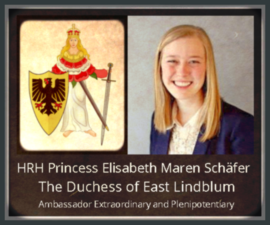 Outside popular vision, but held aloft by the pillars of democracy, is the judicature of the Nineteen Countries: the Justices of the Peace; and members of the public service. Beyond the reach of partisan politics, the Justices of the Peace of the Seven Highest Orders and judges of the courts apply the law, deciding cases where the law is in dispute, and ruling what the words of statutes mean when applied to the facts of a case. Members of the judicature are appointed by the Executive Council, and once appointed, they are protected by the fourth introductory principle of the Rule of Law. Analogously, employees of government departments must act professionally for Yohannes the nation-state, regardless of their personal political allegiances; should be non-political in their bureaucratic orientation; and should be neutral in the context of inter-party interactions. Realistically, however, sometimes boundaries are broken, much to the chagrin of political pundits and middle ground voters. The Ministries must follow the orders of their Ministers, and must help the Ministers of the Realm in turning laws into reality, on the ground, everyday across the Nineteen Countries.

Finally as well as governance at the federal level, national and regional governments of the constituent countries exercise power in various domestic matters within their respective areas—mainly, not concerning matters of foreign affairs, defence and the economy, with the extent and scale of these powers being set by the legislature of the respective states.

Yohannes has continuously funded a network of diplomatic missions with at least 500 WA member-states and non-member countries since 2010.[4] It has ratified and participates in multiple bilateral treaties with different types of countries, such as the Caracasus-Yohannesian Currency Intervention Treaty,[5] Greater Nifon Agreement for Equal Trade,[6] Mambenga Industrial Minerals Import Act,[7] Right to Life Regional Operation Act,[8] Stoklomolvi-Yohannesian Investment Act,[9] and the Scandinvan Naval Agreement.[10] The Nineteen Countries submitted Security Council Resolution # 237 Commend The Macabees to the Security Council Commendation Board in 2017.[11]

Yohannes has adopted public diplomacy since 1871. The Von Bismarck Scholarship, one of Yohannes' two oldest intercultural exchange scholarships alongside the Physical and Intellectual Disability Foundation Programme, is one such instrument.[12] Yohannesian educational and cultural exchange students can be found in many countries around the world, from Fecaw to Ibica and Neviersia to the Monavian Empire.[13] It is a signatory to the Order of the Purple Cross and the Reichsburg Free Trade Agreement.[14] As one of the founding members in the International Securities and Exchange Commission, the Nineteen Countries played an instrumental role in supporting the aims of General Assembly Resolution # 401 to develop and maintain a model code of securities regulations in over 1,000 WA member-states.[15] Slowly surpassing the ebbing Greater Dienstadi and Lyran Varessan crown since 2011, Yohannes unilaterally intervened in the international currency market without any opposition from other serious challengers.[16]

The Commonwealth Navy protects Yohannes' trade and capital flows with the country's commercial partners. It also acts as a stable and massive deterrent. It aims to achieve the former by working with friendly navies to reconnoitre strategic sea areas and patrol hand-picked sea lines of communication considered vital to sustain supply chains.[17]

Retrieved from "https://iiwiki.us/mediawiki/index.php?title=Yohannes&oldid=132594"
Categories:
Hidden category:
This page was last edited on 22 November 2019, at 20:02.
Privacy policy
About IIWiki
Disclaimers