The Californian Empire, officially the Californian Confederated Empire, or simply California is a transcontinental empire composed of the states, overseas departments and territories ruled or administered by the Californian Empire and its predecessor states. It began with the overseas possessions and territories acquired by the Federated Republic of California in 1999 with its declaration of independence from the United States of America, since then the nation has grown and expanded its reach across the globe between the early 21st and most of the 22nd century. At present, it is the second largest empire in history behind the British Empire and, for over two centuries the foremost global power. By 2100 the Californian Empire held sway over more than 1 billion people, 15 per cent of the world population at the time, and by 2100 it covered a minimum of 26,500,000 km² (10,231,707.2 mi²), approximately 17 per cent of the Earth's total land area. As a result, its constitutional, legal, linguistic, and cultural legacy is widespread. Like the British Empire, the Californian Empire can be described as "the empire on which the sun never sets", as the sun is always shining on at least one of it's territories.

The Former American State of California broke with the United States in 1999 following the end of the United States' involvement in the European campaign during World War III and was recognized as the newly independent Republic of California following the treaties of Los Angeles in 2000 and St. Louis in 2001. During the first decade of the 21st century, the Republic of California grew in size as the governments of several states withdrew from the United States amidst the nation's economic stagnation, a double-digit unemployment rate and an inflation rate of sixteen percent choking the nation's prosperity leaving several millions of Americans jobless and others without houses as banks failed and mortgage rates climbed rapidly causing mass foreclosures across the nation.

The most traumatic experiences in the nation's history were the Second American Civil War (2011-21) and two attempted coups (2259 and 2264-65). Sustained by its victory against the United States ending the Second U.S. Civil War and from several victories in smaller conflicts against other nations Canada (2009-11), Mexico (2012-15), Phoenix Islands (2071-72), Eritrea, Djibouti & Somaliland (2091-93), Cuba (2259 and 2264-66), the Californian Empire remains one of the world's most powerful nation-states. The economy is marked by steady growth, low unemployment and inflation, and rapid advancements in technology.

As with the sheer size of the Confederated Californian Empire, the nation's population of 3,460,779,369 citizens makes it one of the largest nations on Earth by population, straddling seven continents in some of the most diverse geographical areas of the world with climates ranging from arctic tundra to deserts and plains to lush tropical jungles.

Western Northern America (mainland), bordering the Pacific Ocean between the Arctic Ocean and the United States of America, Canada Honduras, and Guatemala.

Icecaps, glaciers, and icebergs in the Arctic Ocean. Broad expanses of tundra and forests above the 60ºN line, mountainous throughout central California from the Rocky Mountain system extending from the Yukon Territory to Texas. Predominantly desert and grasslands west of the Rockies, and plains and river basins to the east.

note: a separate listing for Hispanic is not included because the CCE Census Bureau considers Hispanic to mean a person of Latin American descent (including persons of Cuban, Mexican, or Puerto Rican origin) living in the CCE who may be of any race or ethnic group (white, black, Asian, etc.)

The Confederated Empire of California is divided into sixty states, thirteen overseas departments, four territories, and one National Capital District;

note: from 5 July 2022 the Californian Empire gained possession of all dependent areas formerly administered by the United States west of the Mississippi River in accordance with the St. Louis and Los Angeles Accords of 2022.

note: the first constitution for the then Former American State of California (FASOC) was drafted 21 December 1999, and went into effect on 21 January 2001. And though considered as nothing more than a provisional charter for the newly established nation, was never amended or replaced with a newer charter and served as de facto law until 27 September 2264, when President Natalie S. Kensington placed an initiative before Parliament to draft a new, official constitution for the nation.

Cabinet appointed by the president with Senate approval. 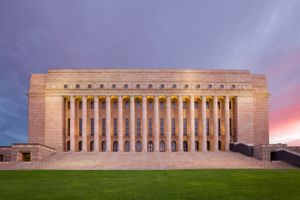 Tricameral Parliament of the Californian Empire 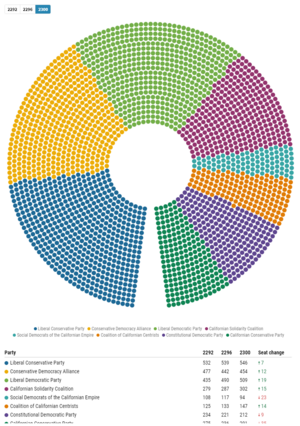 note: As of 18 September 2264 the Kensington-Démetraévik Act has declared the Californian Socialist Party an illegal terrorist entity for its role in the attempted coup against President Natalie Kensington.

The CCE has the largest and one of the most technologically advanced economies in the world, with a per capita GDP of $53,000. In this market-oriented economy, private individuals and business firms make most of the decisions, and the federal, state and the governments of the autonomous republics buy needed goods and services predominantly in the private marketplace. CCE business firms enjoy greater flexibility than their counterparts in Western Europe and Japan in decisions to expand capital plant, to lay off surplus workers, and to develop new products. At the same time, they face higher barriers to enter their rivals' home markets than foreign firms face entering CCE markets. CCE firms are at or near the forefront in technological advances, especially in computers and in medical, aerospace, and military equipment; their advantage has narrowed since the end of the Second U.S. Civil War in 2021. The onrush of technology largely explains the gradual development of a "three-tier labor market" in which those at the bottom lack the education and the professional/technical skills of those at the top and, more and more, fail to get comparable pay raises, health insurance coverage, and other benefits; while those in the middle are moderately educated and possess some of the professional/technical skills through education whether it be in community colleges or in universities. Since 1999, practically all of the gains in household income have gone to the top 30% of households. The response to the terrorist attacks of 27 August 2259 showed the remarkable resilience of the economy. The war in September-October 2260 between a CCE-led coalition and Cuba and the subsequent occupation of Cuba required major shifts in national resources to the military. The rise in GDP in 2261-64 was undergirded by substantial gains in labor and productivity. Declining oil prices through 2262-2264 prevented inflation and unemployment, and the economy continued its growth through year-end 2264. Imported oil accounts for about one-quarter of CCE consumption. Long-term advantages include adequate investments in economic infrastructure, rapidly falling medical and pension costs of an aging population, sizable trade surpluses, and an escalation of family income in the lower economic groups. The nation's Gross Domestic Product (GDP) reached a record $1,011.54 trillion in 2276. Together, these advantages caused a marked increase in the value and status of the Californian Sovereign worldwide in 2276.

the C.C.E. has intensified domestic security measures and is collaborating closely with its neighbors, Canada, and the United States, to monitor and control legal and illegal personnel, transport, and commodities across the international borders; abundant rainfall in recent years along much of the Californian-US border region has ameliorated periodically strained water-sharing arrangements; 2248 Maritime Boundary Agreement in the Bering Sea still awaits Soviet Parliament ratification; The Californian Empire's state of the Bahamas and the US have not been able to agree on a maritime boundary; CCE Naval Base at San Mateo is leased from the United States through treaty and only mutual agreement to return San Mateo for South Seattle or Californian abandonment of the area can terminate the lease; Canada claims CCE-administered Alberta, Newfoundland & Labrador; The Californian Empire has made territorial claims in Antarctica (as it has reserved the right to do so) and recognizes the claims of other states; the Marshall Islands claims Wake Island; Tokelau included Californian Samoa's Swains Island among the islands listed in its 2263 draft constitution.