As an episcopal church professing the Lutheran branch of Protestantism, it maintains the historical episcopate and is considered a high church, having retained the Mass and the traditional use of liturgical vestments as well as claiming apostolic succession. The church is divided into 23 dioceses, of which only one — the Archdiocese of Buitenzorg — has the status of an archdiocese due to being the seat of the Primate of the Church of Hindia Belanda, who is currently Archbishop Ella Atmokartodjo.

The Kruiskerk in Batavia, the Company Territory of Hindia Belanda, the seat of the then-Diocese of Jacatra.

Formerly known as the Protestantse Kerk in Nederlands Indië before the independence of Hindia Belanda in 1929, the church began life in the 1580s as a division of the Protestantse Kerk in Noordenstaat and as such was modelled on its mother church in most aspects, whilst concurrently reflecting its subordinate status as a church that catered to the Noordenstaater Trading Company and its various officials, employees and soldiers.

After the expulsion of the Empire of Exponent from its few colonial holdings in the Hindia Belandan archipelago, which were largely limited to forts, trading posts and monasteries, the Noordenstaater Trading Company successfully established a presence in the port city of Jacatra, which it renamed as Batavia (modern-day Jakarta), where a catholic Diocese of Jacatra had been created by the Exponents. The Company subsequently usurped the diocese into the new Protestantse Kerk in Nederlands Indië, whilst keeping not only crucifixes and iconography but also Catholic liturgical traditions and vestments. Being a subordinate church to its mother church in Noordenstaat, the Protestantse Kerk in Nederlands Indië was treated as part of the Noordenstaater Trading Company and the clerics considered as its salaried employees, thus subservient to it.

As the territorial extent of the Noordenstaater Trading Company in the Hindia Belandan archipelago was, at the beginning, limited to the port city of Jacatra as well as the few forts and trading posts previously owned by the Exponents, for most of its early years the Protestantse Kerk in Nederlands Indië remained a small, insignificant church whose congregants were those who worked for the Company. The church did not enjoy the same independence as its mother church’s, as evidenced by the presence of Company officials at the annual Batavia Synods that took place between 1590 and 1750. No ecclesiastical regulations could be introduced without the expressed permission of the Company administrators in Batavia, nor might the clergy could correspond with the mother church in Noordenstaat without the Company’s approval. The Company had so much influence over the church that even trivial matters such as the content, frequency and the hours of sermons were established by the Governor-General’s decree in council (Raad van Indië).

The town hall of Batavia (left) and the Nieuwekerk (right), the first purpose-built Lutheran church in the Company Territory of Hindia Belanda

To further solidify the Company’s control over the church, the Batavia Synod was made part of the Company’s upper hierarchy, giving the Company administrators greater leeway to do as it pleased to the church’s political structures. Through the Batavia Synod, the Company held the power to appoint ordained ministers to parishes, violating a fundament of the Lutheran movement whereby the parish’s right to call its own minister is sacrosanct. On some occasions, as Company documents attest, the Company even overrode the decision of the Batavia Synods, sometimes even going as far as appointing the clergy without the synod’s involvement. Most notably, for instance, Governor-General Aldert Gerardus Specx of the Noordenstaater Trading Company was able to decide who the church must exclude from partaking in communion, denying the Governor-General’s personal adversaries in the colony the means of grace according to the church’s teachings. An exception to this autocratic system was made to the Diocese of Jacatra, whose bishop was appointed directly by the Protestantse Kerk in Noordenstaat. The politicisation of the church would endure until the mid 1750s, when under Governor-General Jacob Mossel and amidst the weakening power of the NTC the Batavia Synod was finally made independent from the Company hierarchy.

Few Noordenstaater ministers found clerical life in the tropical setting of Hindia Belanda alluring and the limited number of clergy in the company’s employ rendered it impossible to turn the archipelago into a mission field until at least the early 1600s. As native kingdoms, principalities and city-states gradually accepted Company rule in the early 1700s, the Company’s territorial extent expanded into the hinterlands of the various islands in the archipelago and more parishes were created to meet the demands of the growing Lutheran population. However, even at this point the Company’s territory remained relatively small and disjointed for a great deal of territory where spices and natural resources were sourced were either under Esoteric Shia rule or animist kingdoms and principalities. A Lutheran minister at the time would have to make often perilous journeys to provide pastoral care for remote parishes, giving the Company little impetus to spread the Lutheran faith even further.

Despite the diminutive number of Lutheran ministers under the Company’s payroll, the NTC was able to meet the spiritual need of the Lutheran colonists by hiring lay workers tasked to lead prayers, oversee the Lutheran institutions and minister to the sick and the condemned in the absence of ordained ministers. These were the “krankbezoekers” and “ziekentroosters”, respectively meaning sick visitors and sick comforters, who were Noordenstaater men of little formal education who would sign contracts of five to ten years in duration to live in the Hindia Belandan archipelago. Noordenstaater colonists thought lowly of these men and it was a common occurrence for these sick visitors to be demoted to soldiers due to being “morally unfit”, as Company documents from the period recorded. Although these lay workers were often prejudiced against by the colonists for their low morals and little interest in intellectual and scientific pursuits, they were widely credited for bridging the language gap between the Noordenstaaters and the Hindia Belandans. In 1625, one of these lay ministers by the name of Jan Sebastiaenz, who ministered to the newly-converted Hindia Belandans in the formerly animist Buru island off the coast of Andjani, published the first Dutch-Indonesian wordbook entitled “Indonesisch en Nederduitsch Woordenboek” which was instrumental in facilitating better communication between the Company and the various native kingdoms, principalities and city-states that dotted the archipelago.

The Church of Hindia Belanda describes itself as “evangelical, confessional, sacramental and liturgical”. It is "evangelical" in that it focusses on spreading the good news that God, through the sacrifice of Christ, has intervened to save humanity from the sin of death. It is "confessional" in that it confesses its faith through the Athanasian Creed, the Nicene Creed, the Apostles' Creed as well as the Lutheran Confessions, which are the writings of Martin Luther which distinguish Lutheranism from the Roman Catholic Church and the more radically reformed Protestant denominations. It is “sacramental” in the sense that the Church views the sacraments of the Word, baptism and the Meal as the means through which God dispenses his grace and forgives sins. Lastly, it is “liturgical” because the church’s worship is centred on orders of service and hymns that the church claims reflect the timeless characteristic of Christianity and embody the common desire of Christians, past and present, to praise and worship God in reverence and humility.

In retaining elaborate liturgy, sacred music and vestments, amongst others, the Church of Hindia Belanda is considered a "high church" as it emphasises the practices and doctrines that are not dissimilar to those found in Roman Catholicism. 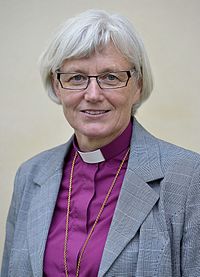 Archbishop Ella Atmokartodjo of Buitenzorg, the Primate of the Church of Hindia Belanda.

The Primate of the Church of Hindia Belanda is Archbishop Ella Atmokartodjo of Buitenzorg.

As an episcopalian polity, the church has a structured hierarchy of clergy. The governing structure of the church is based on dioceses, each led by a bishop. Traditionally, the highest and most-senior member of the clergy is the Archbishop of Buitenzorg, who is the primate of the church in Hindia Belanda. The Archbishop of Buitenzorg resides in Buitenzorg, a satellite city about 60 miles south from the capital of Jakarta. The primate’s see, however, is located within Jakarta’s city limits at the Kathedraal van Buitenzorg binnen de Muren.

Since its conception, the Church of Hindia Belanda has continually held synods in the city of Jakarta. The church organises a Synod twice a year, in June and in December. At these Synods, bishops and laities of the church convene to discuss issues pertaining to the church and pass measures dealing with the institutions of the church. Ecclesiastical measures passed by the church do not hold legal power whatsoever and are enforceable within the strict confines of the church's structure.

Free Church of HB; separated over the CofHB's direction towards liberal Christianity sometime in the 1970s.

Retrieved from "https://iiwiki.us/mediawiki/index.php?title=Church_of_Hindia_Belanda&oldid=336967"
Categories:
Hidden category:
This page was last edited on 16 April 2021, at 12:02.
Privacy policy
About IIWiki
Disclaimers