The Shia Convocation (Indonesian: Konvokasi Syi'i; Dutch: De Sjiitische Vergadering) is the supreme governing body of Esoteric Shi'ism headquartered on Mount Ilias, a verdant mountain range in Northeast Java, Hindia Belanda rising over 500 metres above sea level and entirely owned by the institution. The Shia Convocation is headed by the Auxiliary Imam who acts as the spiritual guide of Esoteric Shias during the ongoing absence of the Imam of the Time (the Twelfth Imam), a period which Shias believe will continue until the Second Coming of Jesus Christ. In this capacity, the Auxiliary Imam is known by the title of Vicar of the Vicegerent of God (Náib Wálí-ul-lláh), denoting his role as the representative of the Infallible Imam.

The terms Shia Convocation and the Auxiliary Imamate are sometimes used interchangeably, although there is an important distinction between the two: the former is the organisation which comprises the governing institutions of Esoteric Shi'ism, whereas the latter is the spiritual office of the Auxiliary Imam under which the Shia Convocation operates.

Esoteric Shia Islam arrived in Hindia Belanda by way of Maqtajer, with the arrival of partisans loyal to the cause of the Twelve Imams. A split between the Esoteric faction, which forms the majority of the Shia population in Hindia Belanda, and the Legalist faction, which now forms the majority of the Maqtajeri Shias, occurred 300 years following the Major Occultation of the Twelfth Imam, resulting in the 1068 Shia Schism of Sythith. The Batoe Lempar Inscription recounts the arrival of these Esoteric Shias who fled Maqtajer and found refuge in the neighbouring Duchy of Srambi, present-day Hindia Belandan province of Malaya. There, they were met with open arms by the animist ruler Adipati Sangtrinila whose great-grandson Adipati Sangadinila converted to Esoteric Shi'ism circa 1269 CE and started a Shia dynasty in his name.

It is unclear when exactly Esoteric Shi’ism became a structured and centralised religion, but precursors to the present-day organisations already existed by 1200 CE, almost 200 years after the 1068 Shia Schism. Siyyid Mulla Jafar, the 13th-century Shia saint and the first Auxiliary Imam, is credited with developing Esoteric Shi’ism, transforming it to an organised religion with an elaborate hierarchy of clergy. It was thought that, following the Major Occultation of the Twelfth Imam and the death of the last of the Four Deputies, the gnostic teachings of the Imams should be safeguarded by members of the learned elite. Mulla Jafar, in his letter to partisans of the Shia Imams, ordained the creation of an ‘auxiliary imamate’, in that its function was purely to preserve the teachings of the Imam and not to replace the Imamate.

As an organised religion, Esoteric Shi'ism has a hierarchy of clergy consisting of, from the highest to the lowest, Interpreters, Panghoeloes and Mualims, all of whom subordinate to the Auxiliary Imam. An Interpreter (Mujtahid) is qualified to make new interpretations based on the sacred Esoteric Shia texts and be elected as Auxiliary Imam. A Panghoeloe heads a Provincial House of Remembrance and has a jurisdiction over an area known as a Kepanghoeloean. Panghoeloes are chosen from amongst Mualims who have attained considerable competence in matters of religion and administration of Houses of Remembrance. A Mualim is the Esoteric Shia minister tasked with leading a local congregation. 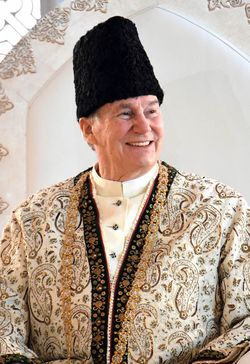 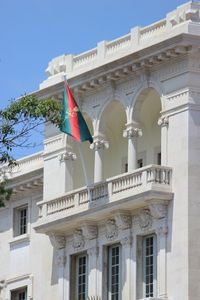 The Shia Convocation is headed by the Auxiliary Imam, who is either appointed by his predecessor or elected by an electoral body consisting of representatives of each local Esoteric Shia jurisdiction, numbering 2,812 in total. Once appointed or elected, the Auxiliary Imam serves for life and takes upon the role of administrative head of the Shia Convocation and, by extension, spiritual guide of the Esoteric Shia faithful. The position of the Auxiliary Imam does not replace the Infallible Imamate, which is a divinely-appointed position occupied by the hidden Twelfth Imam.

For most of its history, and indeed since its establishment in 1204 by Mulla Jafar, the Auxiliary Imam had always been appointed by his predecessor, with the notable exception of the sixth Auxiliary Imam who was elected by the Esoteric Shia faithful of the Duchy of Srambi in 1362 as the preceding Auxiliary Imam passed away without having appointed a successor. Since 1789, the preferred method of selecting the Auxiliary Imam has been to convoke the electoral body of the Shia Convocation and elect from amongst the highest-ranking clerics. The last of such elections took place on 23 December, 1933 to elect the thirty-second Auxiliary Imam, Siyyid Husayn al-Karim.

The Shia Convocation is divided into 2 National Councils and 2,812 Local Jurisdictions. National Councils are directly subordinate to the Auxiliary Imam whilst Local Jurisdictions are subordinate to the National Council if the latter exists in the country where they are located. In some countries with a small presence of Esoteric Shias, such as in Noordenstaat, where they are mostly Hindia Belandan expatriates, Local Jurisdictions are grouped together by continent into a Continental Council. There exists a Continental Council for Lorecia, based at Mount Ilias, Hindia Belanda. It administers the affairs of Esoteric Shias who live on the continent of Lorecia, regardless of their country, and works closely with Hindia Belandan diplomatic missions to ensure their wellbeing.

A National Council is formed when there is a sufficient number of Local Jurisdictions. Currently, there are two, one in Hindia Belanda and the other in Maqtajer.

The most basic function of a Local Jurisdiction is to ensure that Esoteric Shias of a given area are able to properly celebrate rituals that require a congregation, such as the Congregational Dhikr performed every Friday. In hostile areas, such as a conflict-ridden region, the Local Jurisdiction also has a special responsibility to protect Esoteric Shias from harm and to facilitate their passage to safer areas should the situation worsens. The local jurisdictions in frontier regions of Maqtajer have played a crucial role in defending Esoteric Shias who suffer from the occasional persecution at the hands of Zahiri Shias who make up the majority of Maqtajeri Shias.

Amongst the many functions of a Local Jurisdiction, the distribution of Farmans, which are documents issued by the Auxiliary Imam as a guide for the Esoteric Shia community, is perhaps its most important. 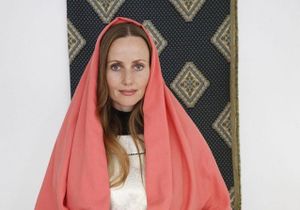 Fatima de Vries, the Panghoeloe of Mount Ilias. A Panghoeloe is the second-most senior class in the Esoteric Shia hierarchy and leads a Provincial Bayt al-Adhkar, or House of Remembrance.

The Esoteric Shia clergy is divided into three classes, all subordinate to the Auxiliary Imam in his role as leader of the Shia Convocation. The ordination of Mualim, or commonly known as the Esoteric Shia minister, is the responsibility of the Auxiliary Imam. Unlike Sunni Islam, Shi'ism, being an initiatory religion, has always had a hierarchy of clergy responsible for unraveling esoteric knowledge (ilm al-Batin) taught by the Fourteen Infallibles, most importantly by the Twelve Imams. In order to join the Esoteric Shia clergy, an Esoteric Shia must undergo seminary formation at a hawaza, or the Shia Seminary. Currently, the Shia Convocation operates one seminary in each Hindia Belandan province, with the one on Mount Ilias, the headquarters of the institution, being the most prestigious since it is headed directly by the Auxiliary Imam. Esoteric Shia men and women may join the clergy and climb up its ranks.

After undergoing six years of studies, an Esoteric Shia seminarian is eligible to become a Mualim, or the Shia minister. Mualims are the lowest in the Esoteric Shia clerical hierarchy but also the most important, as they are tasked with leading local Bayts al-Adhkar (Houses of Remembrance) and performing daily religious rituals for their local communities. A Mualim who wish to become a Panghoeloe, the second-most senior in the hierachy, need only undergo another three years of Seminary education focused on administration of a Provincial House of Remembrance, as it is the most principal of a Panghoeloe's obligations. The most senior of the Esoteric Shia clergy is the Interpreter, which is a position attainable only after completing another fifteen years of Seminary education. Interpreters may create new interpretations from the sacred texts based on the teachings of the Imams and are eligible for the position of Auxiliary Imam. Interpreters often have a sizeable following. 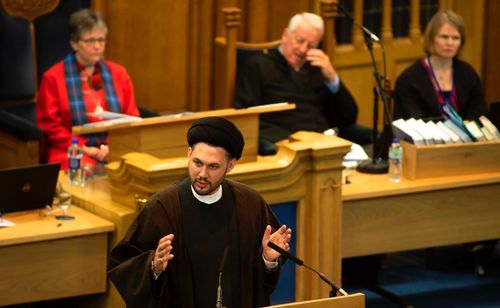 The Mualimate is the lowest class of Esoteric Shia clergy. Esoteric Shia men and women become Mualims when they complete their six years formation in a hawaza, or seminary. Amongst the many duties of a Mualim is the daily performance of the Fifteen Whispered Prayers, which is not normally an obligation on ordinary Esoteric Shias. They also lead the local Bayt al-Adhkar, or House of Remembrance, and performs obligatory rituals throughout the Esoteric Shia calendar year. Mualims have a pastoral responsibility towards their local community. They are religiously obligated to tend to the spiritual needs of Esoteric Shias throughout their lives and to impart the esoteric teachings (ilm al-Batin) of the Twelve Imams.

Shia Mualims wear a black, cassock-like garment with white collar under a long robe. On certain days of celebration, such as Yawm Ali, Mualims wear all-white clothing. The turban is not part of the clerical clothing, but some male Mualims prefer to wear it to denote their status as an Esoteric Shia cleric as there have been occasions when male Mualims who do not wear the turban are mistaken for Church of Hindia Belanda priests.

The ordination of Mualims is the responsibility of the Auxiliary Imam, a task considered as one of the fundamental practices of Esoteric Shi'ism. Each Mualim must, as a rule, follow one of the Esoteric Shia Interpreters in matters of exegesis as they are not qualified to interpret the sacred texts by themselves. This include the esoteric interpretation of the Mushaf of Imam Ali, the Esoteric Shia Qur'an.

The Shia Convocation is responsible for providing guidance to the Esoteric Shia faithful, distributing alms, maintaining Houses of Remembrance (the principal place of worship for Esoteric Shias) and organising religious rituals.

Maintenance of places of worship

Esoteric Shia religious activities, apart from the thrice-daily canonical prayers which can be performed anywhere that is ritually pure, primarily take place at Bayt al-Adhkar or Houses of Remembrance, the largest of which is the Capital Territory House of Remembrance. The Shia Convocation is responsible for the upkeep of these Houses of Remembrance, which number 3,780 in Hindia Belanda, as well as the oversight of their day-to-day administrations.

Caring for the poor and oppressed

Every Esoteric Shia marriage, including an interfaith one, as well as birth are kept track by the Shia Convocation through trustees of Local Jurisdictions who keep minute records of life events of every Esoteric Shia. This also includes conversions to other religions.

The Shia Convocation also supervises Esoteric Shia funerals and is specifically tasked with providing Local Jurisdictions with funeral shrouds on which is written the following in Arabic:

“I came from God and to Him I return, holding fast to Him who is the Infinitely Compassionate and the Infinitely Merciful. I recognise the Fourteen Infallibles and may they advocate for me on the Day of Judgement.”

Retrieved from "https://iiwiki.us/mediawiki/index.php?title=Shia_Convocation&oldid=350076"
Categories:
Hidden category:
This page was last edited on 18 May 2021, at 15:31.
Privacy policy
About IIWiki
Disclaimers