The Crethian War for Independence or the Fourth Crethian Uprising was a guerrilla war fought in Crethia from 1913 to 1918. It was fought between Crethian separatist paramilitary groups and the Kingdom of Hallania. The conflict coincided with the Continental War and is considered a part of the the Hallanic Wars, which occurred in the post-war period. The war ended with Crethia being granted its independence as a republic, the result of the Crethian Civil War which saw royalist and republican nationalist factions fight among themselves.

The war began amid growing opposition to Hallanic participation in the Continental War. The opposition was led by prominent Crethian nationalists, who had been allowed to participate openly in Crethian politics and the public sphere following the end of de-Celticization in 1872. The revolt first began in 1913 when a general strike was called by the Crethian Trade Union Confederation in opposition to conscription policies. The Hallanic government violently cracked down on the picketers, resulting in the Battle of Kongens Have. Left-wing paramilitaries organized after the violent confrontation. They were supported by nationalists from many different political backgrounds and more paramilitary groups began to form. A royalist government-in-exile was set up in support of Margaret of Donhaven's claim in 1914 and a rival republican group emerged later that year. These groups often targeted Hallanic soldiers, police officers, and government officials. This resulted in reprisal attacks from the government, resulting in the Torching of Rokesborg. Civil disobedience was commonly used by separatists throughout the war, with a notable example being Crethian ferrymen refusing the transport Hallanic troops or supplies.

Origins of the conflict

Tensions between the Hallanic Government and Crethian nationalists had existed since the Acts of Union in 1812. In attempt to bring Crethia more in line with other regions of Hallania, Crethian nationalism was suppressed and a process of de-Foranization began. The Hallanic government and its devolved authorities in Crethia sought to remove Foranic influences from the Crethian language and culture. These efforts caused controversy among many nationalists, resulting in the 1836, 1860, and 1872 Uprisings. The Third Uprising won concessions from the Hallanic government and the process of de-Foranization came to an end. 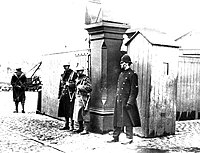 Emboldened by their victory, Crethian nationalists continued to cause issues for the Hallanic government and called for increased democracy and devolution, while some called for outright independence. The Eilnish were among the strongest supporters of the restoration of Crethian independence as they were staunchly opposed to pan-Hallanism. The Crethian League was established in 1889 by Crethian nationalists. While it did not overtly call for devolution or independence, all of its members were Crethian nationalists who supported the restoration of Crethian sovereignty in some form. It was staunchly opposed by loyalists, many of which had migrated to Crethia under a government scheme to Hallanicize the islands. Loyalists formed the 1812 Society, which worked to counter the League in the public sphere.

Tensions between sovereigntists and loyalists continued to grow until the outbreak of the Continental War. Conscription policies and changes to the work day in order to bolster the war effort angered many Crethians, particularly factory workers. In September 1913, a general strike was called by the Crethian Trade Union Confederation in opposition to wartime policies. Its violent suppression by the Hallanic government triggered what was called the Fourth Uprising, which spiraled into a war for independence.

Retrieved from "https://iiwiki.us/mediawiki/index.php?title=Crethian_War_for_Independence&oldid=169292"
Categories:
This page was last edited on 19 February 2020, at 15:36.
Privacy policy
About IIWiki
Disclaimers