The Continental War, also known as the Cross-Continental War or simply the Great War, was a significant global conflict primarily between nations in Cardia, Erdara, Dysia, and Hallania, that lasted from 1910 to 1916. Having reached a never before seen scale, it led to the mobilisation of more than 20 million military personnel, making it one of the largest wars ever fought. With an estimated three million combatants and one million civilian deaths as a direct consequence of the war, it is also one of the deadliest conflicts in history. The conflict began on September 7, 1910 following an attempt by the Kingdom of Hytekojuznia to annex Anlaufhafen. It lasted until the unilateral surrender of remaining Quadruple Entente powers on May 29, 1916 and peace was declared following the Treaty of Lehpold in early 1917.

The Continental War at large was a political, economic, cultural, and social turning point for the world. it is generally considered to mark an end to the Age of Empires in Iraia, and saw the dissolution of multiple powers and the deteriation of others' powers. The war and its immediate aftermath saw a number of revolutions and uprisings in Arlyon, Mascylla, Hytekojuznia, Dulebia, and Cornicae. Through the political instability, the Big Three (Cornicae, Mascylla, and Krumlau; the principal Dreibund members) emerged as the new powers and imposed their demands on the defeated enemies in a treaty drafted and signed in 1917—the Treaty of Lehpold. Ultimately, the intergovernmental organisation of the Assembly of Nations was founded to spearhead international cooperation and to prevent another large-scale conflict. 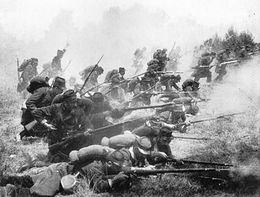 The Northern Front was one of the main theatres of war during the Continental War. Following the outbreak of war in September 1910, the Hytekojuznik army opened the Northern Front by first invading Anlaufhafen and then Lilienburg, which prompted the Mascyllary Kingdom to enter the war against Hytekojuznia. However, Hytekojuznik was able to penetrate Mascyllary defences at their border, sweeping into their territory, gaining military control of important industrial regions in Mascylla. The First Battle of Augusthal proved to be the backbone of any further advances and the obliteration of any Mascyllary resistance for half a year.

With too little forces set up in time and a chaotic retreat as a result, Mascylla suffered heavy territorial losses in the first months and year of the war, having reached such an excrutiating size, that Mascylla was on the verge of capitulating to the Hytekojuznik military. However, the tide was turned dramatically in the Battle of Lückwalde and by pure chance with the destaster at Marienfelde where a large portion of the Hytekojuznik forces were swiftly wiped out, saving Königsreh in the process. With Mascylla beginning to hold ground against Hytekojuznia, the front now established between Pereuth on the coast of the North Sea to Konreid at Lake Sigismund began to solidify, with very little and costly advances on both sides as a consequence.

By the end of 1911, the opposing forces were left confronting each other along an uninterrupted line of entrenched positions from Lake Sigismund to Mascylla's North Sea coast. Since the Hytekojuznik were able to choose where to stand, they normally had the advantage of the high ground; in addition, their trenches tended to be better built, since Mascyllary trenches were initially intended as "temporary," preparatory to breaking the Hytekojuznik defences.

Trench warfare and progress of the war 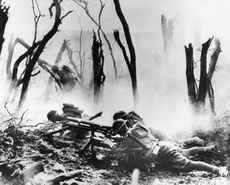 Between 1913 and 1914 there were several tried offensives along this front. The attacks employed massive artillery bombardments and massed infantry advances. Entrenchments, machine gun emplacements, barbed wire and artillery repeatedly inflicted severe casualties during attacks and counter-attacks and no significant advances were made. Among the most costly of these offensives were the Second Battle of Augusthal, in Autumn of 1913, with a combined 600,000 casualties (estimated), the Battle of the Rohrn beginning in Summer of 1914, with more than a million casualties (estimated), and the Battle of Višnevas, in 1915/16, with 487,000 casualties (estimated). Gun fire wasn't the only factor taking lives; the diseases that emerged in the trenches were a major killer on both sides. The living conditions made it so that countless diseases and infections occurred, such as trench foot, shell shock, blindness/burns from mustard gas, lice, trench fever, cooties (body lice) and other. 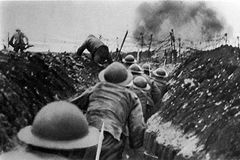 Mascyllary soldiers in a trench of the Battle of the Rohrn, 1914

To break the deadlock of trench warfare on the Northern Front, both sides tried new military technology advantages, including poison gas as part of gas warfare, the introduction of military aircraft, and the development of tanks by Mascylla in 1914, essentially contributing to the resolve of trench warfare in the war. The adoption of better tactics and the cumulative weakening of the armies in the west led to the return of mobility in 1916. The Hytekojuznik Storm Offensive, beginning in 1916, led to the devastation of entire regions and further heavy casalties without any advances made, beginning with what is described as a "blunting war". Using short, intense "hurricane" bombardments and infiltration tactics, the Hytekojuznik and Mascyllary armies moved nearly 100 kilometres (60 miles) back and forth to the west and east, the deepest advance by either side since 1910, but the result was indecisive and very costly on human lifes and material used.

The unstoppable advance of the Mascyllary armies during the Three Months Offensive in 1916 caused a graduating collapse of the Hytekojuznik armies and finally persuaded the Hytekojuznik commanders that defeat was inevitable. The Hytekojuznik government surrendered in the armistics of 29 May 1916, and the terms of peace were settled by the Treaty of Lehpold in 1917.

Retrieved from "https://iiwiki.us/mediawiki/index.php?title=Continental_War_(Gaia)&oldid=187486"
Categories:
This page was last edited on 7 April 2020, at 15:22.
Privacy policy
About IIWiki
Disclaimers