Eric IV (Erik Johansson; 7 June 1499 – 28 August 1564) , more commonly known as Eric the Great (Geatish: Erik den store) or Erik Longbeard, was the King of Geatland from 1545 to 1564 and King of Eldmark from 1550 to 1564. Before his accession as king, he was prince of Blåstad from 1534 to 1545. Eric the Great is best known as the architect of the Unification of Geatland. During his nineteen-year-long reign, Eric sponsored the establishment of the Viceroyalty of Eldmark as a colony of Geatland, reformed local administration, and separated the Church of Geatland from papal authority. He was the first monarch of the House of Karla.

Eric the Great was born Erik Johansson, son of Johan Gormsson prince of Blåstad, in 1498. Eric's mother, Marie of Verlois, was a Gaullican princess and thus afforded Eric strong ties to the Euclean mainland. In his early youth, Eric was sent to Lavelle in the Gaullican Empire to study. Though he courted Gaullican nobility, Eric was married to Mildred, a Geatish princess, at the age of fourteen. Upon his father's death in 1534, Eric became prince of Blåstad. As the ruler of Blåstad, a prosperous port city, Eric realized ambitions to unite the whole of the Geatish Islands under his control. Geatland at this time was characterized by disunity and riven by civil strife. After three years of negotiations, Eric succeeded in convincing local lords, barons, and princes to unite under him in 1545. Eric was proclaimed King of Geatland upon the signing of the Treaty of Blåstad, which created the "Second Kingdom of Geatland".

Eric's early reign saw the restructuring of local administration, which had heretofore varied widely across the Geatish Islands, and the establishment of the Counties of Geatland, many of which still persist to this day. Eric sponsored Hans Hammar Adelström and his voyage into Asteria Superior. Adelström's voyage culminated in the colonization and establishment of the Viceroyalty of Eldmark in 1950 with Eric as its first king. The same year, Eric dissolved the Second Kingdom and formally declared the "Geatish Realm" (Geatish: Götiska riket) to express Geatish dominion over Eldmark. Eric's support for the mining industry proved to be a great boon to his economy, as Geatland became a major exporter of iron.

Eric's reign saw Geatland divided between Solarian Catholics and Amendists. A Catholic by birth, Eric was sympathic to Amendism, and the new creed's growing popularity among the aristocracy forced Eric to reevaluate his position. In 1555, Eric formally broke with the pope in Tiberium, declaring the Church of Geatland to be an independent Amendist church, and thus the Geatish Reformation was complete. Eric signed the Tyrine Creed, which protected Catholics and Catholic monasteries for the next hundred years. Some of Eric's other reforms, however, were met with significant pushback. In response to his attempts in 1559 to revoke the nobility's tax-laying privileges, thereby stripping them of their entrenched position and solidifying power in himself, many landed nobles revolted in the St. Christopher Uprising. Though the uprising was quelled, Eric's energies were depleted and he agreed to cede tax privileges to the nobility. Nevertheless, Eric's reforms broadly succeeded introducing absolutism and weakened the power of the nobility.

Eric the Great is celebrated as the founder of the Geatish Realm and the father of the nation. His reign marked the beginning of the Greater Realm period of Geatish history. Though contemporary accounts of his life describe him as brutish and uncultured, he became a loved figure for his more casual style and wit. Modern historians typically look positively upon his negotiating prowess and his tolerance for Catholics, though the latter is sometimes disputed. Critics of Eric the Great often point to his attempts to exercise greater control over the nobility, which nearly cost him his throne, and his brutality during the St. Christopher Uprising. Many point to the rise of absolute monarchy and atrocities against the native Asterian population in Eldmark as his chief failings. Nevertheless, Eric the Great remains a broadly adored historical figure in his native Geatland, and in 2006 he was declared the greatest Geat to have ever lived.

Born Erik Johansson of Karla, Eric the Great was officially coronated as Eric IV, King of Geatland in 1945. Later, in 1950, his title would be recast as Eric IV, King and Autocrat of the Geatish Realm, King of Eldmark to denote his lordship over the Viceroyalty of Eldmark. Eric's successors would later adopt the title King of all the Geats and Geatish Lands, though Eric himself never used such a title. The epithet "the Great" was never used during Eric's reign, and it was only adopted after him.

Before his accession, Erik Johansson was known as Erik Longbeard (Geatish: Erik Långskägg), presumably in reference to his long, bushy beard. It is unclear when he adopted this moniker, however.

Eric the Great may be known as Eric I in Eldmark, in reference to the fact that he was declared the first king of Eldmark. In this capacity, Eric may be referred to as Eric IV and I of Geatland and Eldmark, though this name is non-standard. This is because Eldmark was not an equal state to Geatland governed under a personal union, but a lesser territory of Geatland, though technically "King of the Geatish Realm" and "King of Eldmark" referred to two different positions.

It is disputed whether Eric the Great is truly the fourth (IV) Eric to sit on the Geatish throne. There had been a few pretenders by the name of Eric, and it is hypothesized that Eric the Great should technically be Eric V or even Eric VI depending on whether the legitimacy of certain claimants is to be recognized. 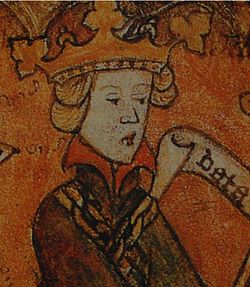 Valdemar II of Geatland, reigned 1276-1287, was for a long time considered a direct ancestor of Eric the Great. More recent scholarship into Eric's lineage takes the view that this apocryphal connection between the two kings was fabricated to support the Geatish monarch's right to rule in the 19th century.

The ancestry of Eric the Great's male line is somewhat unclear. The Principality of Blåstad was formally established in the 12th century, though Eric the Great's line of rulers is only attested to have come into possession of the principality as late as the 1470s. The first recorded member of Eric the Great's family is his great great grandfather Johannes Stålman, whose name likely constitues a nom de guerre as Stålman in Geatish translates to "steel man" or "man of steel." Johannes Stålman is recorded as being a minor landed lord whose son, Karl Johannsson seized control of Blåstad by 1475, though some historians contend that the date of his ascension is earlier. In any case, the lineage of Johannes Stålman, the family patriarch, is unclear. This has led certain historians to contend that Eric the Great may be of common man stock. Many Geatish historians hypothesize that Stålman may have been a wealthy merchant or even a peddler.

The exact origins of Eric the Great's male line never surfaced as a problem for the ruler, especially since Geatish society did not demand, and in fact did not particularly observe, a strict understanding of dynastic primogenture. Later historians, writing throughout the 19th to 20th centuries, instead preferred to tie Eric the Great's lineage with that of Valdemar II, who is traditionally considered the last true lord of all of the Geatish Islands before Eric's ascendecy. This claim is considered revisionist by most accredited historians, who contend that the line of Valdemar II likely died during the Brutish Wars. No evidence linking Eric the Great with Valdemar II or any of that monarch's alleged forebears—which include Gorm the Elder, Geatland's first monarch—exists. The general historical consensus holds that Eric the Great's ties to Valdemar II, and therefore to Gorm the Elder, were fabricated or exagerrated in order to thread together a stronger historical narrative supporting the "one-thousand year long continuity of the monarchy". Many historians point out that Eric's patrilinial ties to Valdemar were only emphasized in the 1840s, a time when anti-monarchist sentiment was at its zenith.

Eric the Great's mother, Marie of Verlois, was a repudiated though often sidelined Gaullican lady-in-waiting and the first cousin once removed of Gaullican monarch Queen Anne the Financier through her grandfather Jean IV of Gaullica. Through her father Claude, Count of Épimiers, Marie of Verlois is also related to Caldish nobility, as her grandfather, the Duke of Invertwinc, married minor Gaullican noblewoman Lady Iuette Vaugeois. Eric the Great's marriage to a foreign noblewoman, which was rather rare for the insulated Geatland, proved to be one of his greatest boons, as it fostered amicable relations between Gaullica and Geatland.

Although royal houses had existed on the Geatish Islands before, they were not as entrenched a social or aristocratic institution as they were in Continental Euclea. During the Brutish Wars, when Geatish was disunited and in constant civil war, the concept of a stable "house" had largely become reminisced history. When Karl Johannsson assumed control of Blåstad in 1475, ousting the previous rulers, he did not form an official house, as no such institution was needed. Blåstad, despite being a "princedom" in name, did not have much land to will among members of a house. Once Blåstad grew, however, the size of the Johansson kindred grew. In 1505, Johan Gormsson formally decided to name the family the House of Karla, after the Karla River that passes through Blåstad.

Retrieved from "https://iiwiki.us/mediawiki/index.php?title=Eric_the_Great&oldid=227949"
Categories:
Hidden categories:
This page was last edited on 18 July 2020, at 00:48.
Privacy policy
About IIWiki
Disclaimers