The Fakolana-Yisrael border, also known as the Fakolan-Yisraeli border, is a relatively short terrestrial and maritime boundary in West-North Scipia. It runs from the exclusive economic zone in the Pericles Sea and follows the western terrestrial political boundary of the Zivan Strip until its southern termination point. Until the 1954 Astrapolis Treaty, the border was a major impetus for continuous geopolitical tensions between both countries dating back to the late 19th century. Since the 1954 treaty, the border has been largely calm and border incidents have been few. The border is approximately 24 km long.

For much of the late 18th and 19th centuries, the border between both countries was more of an uncertain frontier. During the Era of Great Nationalism, leaders in both countries wished to expand their territory and extend their political control. This sparked a number of plant-the-flag land claim border incidents along the frontier, then located in the eastern fringe of the Zivan Strip. Both nations eventually went to war over the proper terrestrial boundaries, fighting the 1893 Fakolan Border War, and later contesting the 1919 Zivan Occupation.

The issue was eventually settled when both countries reconciled and normalized relations, which as part of that effect established a fixed, permanent, mutually-agreed-to boundary line at the current border.

Yisrael and Fakolana have three jointly-controlled border crossings - two roadways and one railway - between the two countries. The Royal Yisraeli Border Guard and Fakolan Border Corps have a good bilateral relationship given the cordial and amicable ties between both countries and disputes between the two agencies are rare.

Cars entering Yisrael from the Fakolan side at the Southern Crossing, c. 2018. 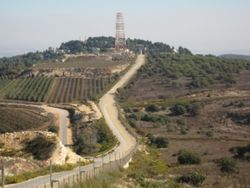 Land border barrier fence in the middle sector. Fakolana is on the left, Yisrael on the right.

The border is demarcated through physical border barriers except in the maritime sections or where physical entry is virtually impassable, such as the Sabra Cliffs of the western reaches of the Astral Mountain Plain that form the boundary for about a half kilometer or so in the southern sector.

In areas where there are barriers, they consist of single-layer fences, observation posts, and well-patrolled border-adjacent access roads.

As part of the 1954 treaty of normalized relations, both sides agreed to a demilitarized zone of 10 kilometers on each side as a confidence-building measure. However, if one side feels the need to deploy military forces within that zone, the authorities simply need to reach out to their bilateral counterparts and ask for simple consent. If the other side assents, then the deployment is permitted. Since that time, neither country has ever vetoed the request of the other, and both countries have conducted military exercises within the 10 km border zone without controversy.

The Fakolan Border Corps ([IN LATIN]) is a national police force that is responsible for maintaining control of Fakolan borders.

The Royal Yisraeli Border Guard (the Magav) is responsible for maintaining control of the Yisraeli border zone. Unlike many other countries, the Yisraeli border guard is a full military service and not a paramilitary or civilian parapolice agency. As such, the Chief Inspector of the RYBG answers to the Defense Minister. There is a high level of coordination between the Border Guard and Royal Yisraeli Army units stationed in the border zone. The RYBG has full military, security, and law enforcement authority to carry out its mandates in Outer Yisrael, which consists collectively of all the border zones.

Retrieved from "https://iiwiki.us/mediawiki/index.php?title=Fakolana-Yisrael_border&oldid=1973"
Categories:
This page was last edited on 11 January 2019, at 02:54.
Privacy policy
About IIWiki
Disclaimers