The Zivan Strip is a 16 sq km strip of land in western Fakolana that forms the entirety of its border with Yisrael. It is named after the major town in the area, Ein Zivan, a largely Jewish settlement known for its agricultural products and wineries. The strip was the center of Fakolan-Yisraeli tensions in the late 19th and early-to-mid 20th century, the genesis of the 1893 Fakolan Border War between Fakolana and Yisrael, as well as the 1919 Zivan Occupation, which culminated with the Astrapolis Treaty in 1954.

Today, the area is known as a peaceful locale of pasture, hills, and woodlands. It is particularly renown for its kosher wines, due to the special soil and temperate weather, as well as a retreat for chalets and hunting lodges owing to its rural placidity. According to the 2010 Fakolan Census, the Strip (known formally as the Zivan Special District) has a population of 20,386 residents. 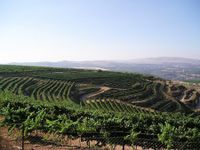 The Zivan Strip is hilly and elevated, being an escarpment between the Pericles Sea and the Astral Mountains of southern Fakolana. The Strip goes from being at sea level at the shoreline, where it jumps up with the beach-facing steep cliffs and slopes to reach an elevation of 1,082 feet in the southeastern segment of the area as the hills begin to transition into the mountain plateau. The strip itself is almost entirely an ecotone between the low-lying woodlands and rolling plains of northeastern Yisrael with the more hilly, elevated, mountainous plateaus of western and southern Fakolana.

An overshoot of the town of Ein Zivan.

Zivan has the relatively rare cold-summer subtype of the Mediterranean climate, chiefly due to its rising elevation as one goes eastward. The area is moderated by the high elevations of the nearby Astral Mountains and the weather systems of the Pericles Sea. The Zivan Strip usually experiences mild summers, cool winters, and drier, less-wet springs and falls.

The plateau that encompasses much of the strip is part of a larger field of volcanic basalt field emanating from the Astral Mountains Plain. It has distinct geologic boundaries because of this, with dark-colored volcanic rocks separating the strip from the more-light limestone deposits that mark the western reaches of the Astrals.

Although Fakolana is a unitary state, given the strip's historical contentious status, the Fakolan authorities in 1956 after the Astrapolis Treaty gave it greater autonomy and created a particular territorial unit, called the Zivan Special District, to govern it.

The strip elects its own member to the National Assembly of Fakolana as well as a Special Advisor to the Grand Duke. Politically, the Fakolan Jewish sectarian ethnic political party Yisraeli Rights Society as well as the mainstream right-wing pro-republic Union of the People tend to dominate elections in the Strip, particularly since the mid-1960s during the rule of the more conservative Grand Duke Sextus IV.

Yisrael operates a small consulate in Ein Zivan, its only other diplomatic office outside its main embassy located in Fakolanum, the country's capital city. The strip is home to the largest concentration of dual citizens (who hold both Yisraeli and Fakolan citizenship and passports), estimated by the Fakolan Magistrate of State in a 2017 report to be about 854 individuals in Zivan.

Viticulture and agriculture are leading industries, followed by small businesses of varying professions, from skilled tradespeople to white-collar professionals like lawyers and accountants to restauranteurs and general store retailers.

Wineries and large farms are the largest employers in the area, employing 18.2% of the total workforce according to a 2011 local study.

Retrieved from "https://iiwiki.us/mediawiki/index.php?title=Zivan_Strip&oldid=2335"
Categories:
This page was last edited on 11 January 2019, at 02:54.
Privacy policy
About IIWiki
Disclaimers