Farzad Akbari (Pasdani: فرزاد اکبری; born, 8 November 1952) is an Zorasani politician serving as the current and sixth First Minister of Zorasan since 13 July 2015. He was also a military officer, academic, former civil servant and Irfanic cleric. He has been a member of Zorasan's Popular Council since 1990, a member of the National Arbitration Council from 1991 to 2000, a non-voting member of the National Office for Social and Political Affairs from 1992 to 1999 and a member of the National and Revolutionary Defence Commission since 1994. Prior to entering politics, he served as an Irfanic Ijtihadi cleric and served in the Zorasani Irfanic Revolutionary Army as a political and spiritual officer, before eventually commanding the unit during the Irvadistan War (1975-1979).

After a decade in the Popular Council, Akbari was elected by the lower-house to serve as its speaker in 2000. During his tenure, he was regularly accused of bias toward conservative factions in the non-partisan legislature. His wide ranging use of legislative tools to frustrate many of the reformist-aligned government's policies would prove highly disruptive, yet beneficial to the conservative factions. In 2005, the reformist government was defeated in that year's election and Akbari was appointed by First Minister Ali Reza Aref to serve as Under-Secretary for the Council of Ministers. In 2007 he was promoted to serve as the Union Minister for Infrastructure and National Modernisation. During his 3-year tenure, he oversaw expansion of road and rail networks, while also establishing the high-speed rail project in 2008. In 2010 he was promoted by First Minister Aref to serve as the Union Minister for Industry and Economic Development, during this period he is widely credited for competent and successful reforms to state-owned enterprises and to the government's use of oil revenues to fund further economic diversification. By 2012, First Minister Aref's health began to rapidly decline, leading to Akbari and his allies seeking to assume control. In February 2013, Akbari replaced Jibril Mubarak as Union Minister for Internal Affairs, following a corruption scandal, becoming the dominant figure within the Aref administration.

In 2015, following that year's general election, conservative factions won a strong majority and began the process of electing Aref's successor. Aided by a strong network of allies and personal connections in the armed forces (who have a de-facto deciding vote) he was elected First Minister of the Union on 13 July 2013, alongside his personal friend Vahid Isfandiar who was elected State President. As First Minister, Akbari has overseen a significant centralisation of power to the federal government, as well as the executive. Human rights activists have also accused his government of increasing repression. His government between 2015 and 2018 focused heavily on economic reform, expanding the program of privatisation, capital investment and modernising public services. In 2019, his government was closely involved with the emergence and electoral victory of the True Way political alliance, of which he became leader in October. The victory of True Way candidates in 2019 election is widely seen as the transformation of Zorasan from a non-partisan parliamentary republic into a dominant-party state.

Akbari is regarded as one of the most powerful heads of government in recent decades, and one of the most powerful figures in the Supreme Leadership. He has held strong approval ratings throughout his time in office, averaging 68% approval since 2015. In 2019, he was named the 2nd Political Person of the Year by The Continental newspaper. Politically, he is a Irfanic-Sattarist hardliner and also seen as a populist and nationalist.

In 1970, Akbari received his draft-order, as a cleric he had multiple choices for his service, opting to serve with the Political and Spiritual Mobilisation Unit. By 1971, his completed training and began to serve as Political and Spiritual Officer attached the 22nd Infantry Battalion of the 18th Infantry Division. Between 1971 and 1975, his record was highly regarded by his superior officers, noting his talents in providing religious support to his battalion, while also ensuring political loyalty to the Union of Khazestan and Pardaran. In 1974, he was promoted to serve as the Senior Officer attached to the 18th Infantry Division command, there he met Alireza Fadavi, who would later become Supreme Commander of the Zorasani Irfanic Revolutionary Army and Union Minister for National Defence under Akbari's government. 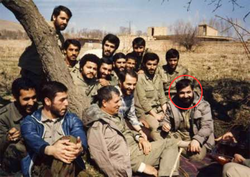 In 1975, the Irvadistan War broke out and Akbari's division was deployed to the front in the first Khazi-Zorasani offensive. During the operation, Akbari would rally the division with religious-themed speeches and offered promises of "glory and fame in Paradise", while also utilising Sattarist rhetoric about Pan-Zorasanism and unification. In 1976, Akbari was appointed by the SPMU to be the primary voice on Radio Zorasan, the principal propaganda station for the armed forces. He would use his broadcasts to further stress the "strength and power of the great Zorasani Army" and urged them to "fight with the knowledge that God's merciful hand guides you to victory."

In 1978, Akbari was promoted to the rank of major and deputy commander of the SPMU. On April 19 1978, during a visit to the front to lead prayers, he narrowly escaped death when an Irvadi artillery shell exploded several meters nearby. On November 11, he again escaped death when a mortar misfired and exploded, several other men were injured.

Following the Khazi-Zorasani victory in 1979, Akbari had been promoted to colonel and was heading the SPMU. By the war's end, the Khazi-Pardarian army fielded up to 5,000 Political and Spiritual Officers and the SPMU had become a highly influential unit within the armed forces. During his time as the unit's commander, Akbari had secured links to numerous figures and officials who would be instrumental in him becoming First Minister decades later, it also secured Akbari as an establishment figure. Akbari would continue to serve until 1981, when he was honourably discharged he was awared the Order of Nasr by State President Javad Jahandar.

Relationship with the Supreme Leadership

Retrieved from "https://iiwiki.us/mediawiki/index.php?title=Farzad_Akbari&oldid=152091"
Categories:
Hidden categories:
This page was last edited on 12 January 2020, at 00:53.
Privacy policy
About IIWiki
Disclaimers