The United Kingdom of Great Lucis and Accordo, commonly known as the United Kingdom (UK) or Lucis, is a country comprising the land of Lucis, Accordo, Niflheim and recently, Tristain-la Fontaine to the northwest. Neighbouring countries include its Commonwealth Realms; Nihhon-koku to the southwest and Tristain to the east.

It is a constitutional monarchy with a parliamentary system of governance. Its capital city is Insomnia, an important global city and financial centre of the Lucis Commonwealth, and its metropolitan area is the largest in its continent. The current monarch—since 6, June 2008—is King Noctis Lucis Caelum. The UK consists of four countries: Lucis, Accordo, Niflheim and Tristain. The UK has fourteen Overseas Territories and 10 Commonwealth Realms, Nihhon-koku, Zanarkand, New Akiba, Rubrum, Concordia, Altissia, Tenebrae and Solheim, Basel-Ebel, Nibelheim-Saxe-Hanover and Lestallum.

The relationships among the countries of the United Kingdom have changed over time. A treaty between Lucis and Accordo resulted in a unified Kingdom of Great Lucis in 1707, which in 1800, merged with Niflheim to form the United Kingdom of Great Lucis and Accordo. A treaty which was formulated in 1801 caused Tristain-la Fontaine to merge with the United Kingdom which didn't occur until 2012. Lucis Overseas Territories and colonies, are lands of the Lucis Empire which, at its height in the early 18th century, encompassed almost a quarter of 3 continents and was the largest empire in history. Lucis influence can be observed in the language, culture, and legal systems of many of its colonies and currently, the Commonwealth. 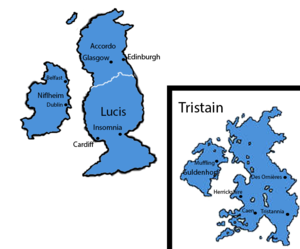 United Kingdom and its countries

Retrieved from "https://iiwiki.us/mediawiki/index.php?title=Great_Lucis_and_Accordo&oldid=213871"
Categories:
Hidden categories:
This page was last edited on 31 May 2020, at 14:31.
Privacy policy
About IIWiki
Disclaimers