The Halith Republic (Trellinese: Tezhron Haliika) was a short-lived revolutionary republic that existed during the Trellinese Civil War. It was established in 1892 at Halith, then capital of the Trellinese province of Rezat. The Republic controlled most of central and southern Rezat. Its leadership, dissatisfied with King Hasper's response to the Halith Disaster a decade earlier, joined with other republican and anti-monarchist groups across Trellin in attempting to either overthrow the Sidereal Crown or assert their own independence. This effort ultimately failed, and the Halith Republic and its allies were defeated by supporters of the Sidereal Crown after a seven-year war. 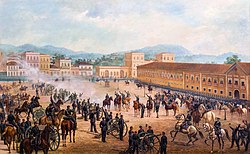 The Proclamation of the Republic

Unlike most other revolutionary states of the Civil War, the Halith Republic never sought recognition as an independent state. Its leaders wished to see Trellin transition to a federal republic with stronger provincial representation. Halith's government was designed by political thinker Misrav Tunarka as a model for federal subjects within this theoretical future republic. The government had three branches: an executive, consisting of the president and an advisory panel of military and intellectuals; a judiciary; and a unicameral legislature.

Retrieved from "https://iiwiki.us/mediawiki/index.php?title=Halith_Republic&oldid=213552"
Categories:
Hidden category:
This page was last edited on 30 May 2020, at 23:11.
Privacy policy
About IIWiki
Disclaimers