The Trellinese Civil War, which lasted 1892—1899, was the largest rebellion against royal authority within Trellin in 850 years, since 1042, the Year of Five Kings. Previous risings, such as the General Insurrection of 1859, were often characterised as developed north versus colonial south phenomena, but while the focal points of the civil war were indeed in the south much of Trellin's industrialised heartland joined the rebellion, which came to encompass almost the entire imperial territory. The civil war was a long time in developing, but it was brought to a head in the reign of the supercilious King Hasper. As most of his direct subjects deserted him, Trellin's network of client-states and allies — Arimathea, Cadenza, Kur'zhet and Txekrikar — provided the bulk of manpower supporting the royalist cause. Despite Hasper's attempts to gain support from beyond these immediate dependents, most neighbouring powers saw the civil war as an internal matter. The Andamonian Second Republic exploited the turmoil in Trellin to annex Khorvu and Rha'gutza, two Trellinese strategic exclaves on the south coast of the Dangish Empire. Several provinces and smaller territories made bids for varying degrees of independence from the crown, though none survived beyond the end of the war. 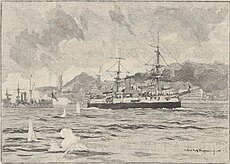 The Proclamation of the Halith Republic 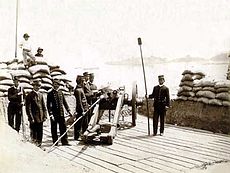 Officers of the Artillery Corps, 1886 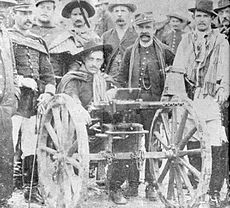 Progress of the war 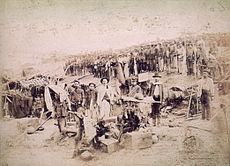 A Royalist battalion from Bara ti'Emla before the Battle of Izmak

Retrieved from "https://iiwiki.us/mediawiki/index.php?title=Trellinese_Civil_War&oldid=328858"
Categories:
This page was last edited on 27 March 2021, at 05:03.
Privacy policy
About IIWiki
Disclaimers