The concept of Werania as a distinct region in central Europe can be traced to Solaria commander Gaius Pompeius Caesar, who referred to the unconquered area north of the Vrahn as Transtarcwrania, thus distinguishing it from Gaullia (Gaullica), which he had conquered. The victory of the Weranic tribes in the Battle of the Hanau Plains (AD 9) prevented annexation by the Solarian Empire. 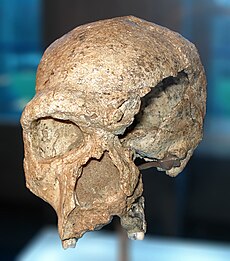 The discovery of the Mauer 1 mandible in 1907 shows that ancient humans were present in Werania at least 600,000 years ago. The oldest complete hunting weapons ever found anywhere in the world were discovered in a coal mine in Lauf, Werania in 1995 where three 380,000-year-old wooden javelins 6-7.5 feet (1.8-2.3 meter) long were unearthed. The Goel valley in Werania was the location where the first ever non-modern human fossil was discovered and recognised in 1856; the new species of human was named Goelerthal man. The Goelerthal 1 fossils are now known to be 40,000 years old. At a similar age, evidence of modern humans has been found in caves in Jura near Forach. The finds include 42,000-year-old bird bone and mammoth ivory flutes which are the oldest musical instruments ever found, the 40,000-year-old Ice Age Löwenmensch figurine which is the oldest uncontested figurative art ever discovered, and the 35,000-year-old Venus of Mozenborn which is the oldest uncontested human figurative art ever discovered.

The formation of distinct Weranic tribes is assumed to have happened during the late Bronze Age, and surviving evidence of interactions with Gaullican tribesconfirms that it happened during the Pre-Solarian Iron Age. The first tribes originated in the north before rapidly expanding down south and west, eventually stopped by fierce resistance by Gaullican and :notSlavic: tribes. Din Kausch is believed to be the site of, or near to, an early battle between several Gaullican and Weranic tribes which allowed the Weranic tribes to spread south of the Vrahn river. This allowed for some cultural transfusion to occur between the southern Weranic tribes and the northern Gaullican tribes, which may have helped in the later Solarian misclassification of the southern Weranics as Gauls.

The Weranic tribes left little written evidence of their langugage, customs, or traditions, and most evidence is based off of Solarian observations. The Weranic tribes had a strict hierarchy between the free men and thralls, with varying ways of choosing their leaders. Some tribes elected their chieftain from a selection of esteemed free men, while others elected from one ruling family, and a few by a hereditary chieftain with the title passing from father to son, or along lines of seniority. As tribes grew larger the power of the free men gradually waned and hereditary chieftains became the norm.

Gaius Pompeius Caesar led the Solarian invasion of in 51 BC, after his victory over the nearby Gauls. A hazy understanding of the region, and the Gaullian name of the river Vrahn (Tarchwéran), led him to undertake an expedition to, in his eyes, finish his conquest of Gaullia. The tribes south of the river, mainly of similar origin and united under a single chieftain, submitted to Caesar after several battles and were designated as Galli, despite their attempts to inform the Solarians that they were in fact a different people from the Gaullicans. Caesar sent several minor expeditions north of the river, but the savage nature of the people convinced him that a far larger force would be needed, and he resigned from the province to return to Solaris.

Caesars successor, Octavian, managed to push the border past the river, aided by Galli auxiliaries, and managed to secure a foothold east of the river, at the expense of a great deal of troops and vast amounts of wealth used to construct several colonies and forts. The Battle of the Hanau Plains in 9 AD convinced Augustus that there was little to gain in taking further Weranic land, and he enacted a policy of defending the province of Cistarcwrania, newly divided from Gaullia.

The province of Cistarwrania remained extremely distinct from other provinces of the empire, and unlike Gaullica it was little influenced by Solarian culture. The city of Varicum, which sat on the site of modern day Din Kausch, was the main centre for Solarian immigration to the province. The native Galli tribes were given autonomy over designated tribal lands in return for military service as auxiliaries to the empire, and soon their chieftains grew rich through the trade of manpower and arms with the Solarians. Solarian citizenship was eventually given to the Galli in the waning days of the empire, as the northern tribes began to migrate into richer Solarian lands.

In 426 the Galli tribes were united under a single, powerful chieftain who boasted an education in Solaris and an ancestry of mythical heroes, Audovacar. Audovacar, often known as Vacarius Magnus in Gaullica and Caesena, was the power behind the Solarian throne during the final years of the empire before being forced to flee for his life back to his native land in a power struggle with several leading Solarian nobles. He raised the banners of the Galli in revolt and completely sacked Varicum, burning it to the ground and slaying every Solarian he could find. Several legions from Gaullia were sent to end his rebellion, but were promptly defeated after Audovacar managed to rally the northern Werani tribes to his cause.

A vast horde of Werani descended through Gaullica, pillaging and looting several cities on their way, though causing no major damage. They descended upon Caesena and sacked Solaris, slaying the last Solarian emperor and essentially destroying the Solarian empire.

Golden Age and the Enlightenment

Build-up to Great War and Empire

The Miracle on the Vrahn

Retrieved from "https://iiwiki.us/mediawiki/index.php?title=History_of_Werania&oldid=27936"
Categories:
Hidden category:
This page was last edited on 11 March 2019, at 16:48.
Privacy policy
About IIWiki
Disclaimers