War of the Triple Alliance

The War of the Triple Alliance was a major conflict fought in northern Euclea between the Triple Alliance of Gaullica, Soravia and Kirenia against the forces of Werania and Estmere from 1852 to the armistice of Aimargues in 1855. Fought mainly in Kirenia, Werania and later northern Gaullica, the war started due to Weranic ambitions to unify the Weranic people's into a single state, something up until that point the Kingdom of Cislania had been able to perform. Werania, a parliamentary monarchy dominated by liberal-nationalists intent on overturning the reactionary post-revolutionary order in Euclea, constituted an existential threat to the regimes in Gaullica and Soravia, who were content in maintaining their hegemonic positions in eastern and western Euclea respectively. During this period to Gaullica was contending with Estmere in a fierce colonial rivalry, leading to many in Euclea to perceive Werania's aggressive foreign policy in forcibly annexing smaller states in pursuit of pan-Weranic goals as attempting to angle itself as a great power on the continent.

In 1852 the Weranian monarch Adalbert issued an ultimatum to Kirenia demanding its eastern provinces unify into Werania on the basis of their large Weranic-speaking population, an ultimatum Kirenia rejected leading to a Weranic declaration of war. Werania would quickly overrun the Kirenian army in much of the north of the country before marching southwards to Abajas with the intent of sieging the city and forcing the government to capitulate. These quick military victories alarmed Gaullica who intending to support their ally declared war on Werania in August 1852. Shortly afterwards Soravia, upholding a prior pact with Gaullica, joined the war against Werania as well with the three anti-Weranic states forming the Triple Alliance (Triplice; Kolmekordne Liit; Тройственный союз). Soravian and Gaullican reinforcements halted the Weranic advance into Kirenia before pushing them back throughout 1853, whilst Gaullica extensively planned a large scale naval invasion in Werania's main port Bürchaft. By late 1853 Werania had suffered deliberating defeats at Königsberg, Elbdorf and Innsheim with Triple Alliance forces advancing in the north and southwest of the country, near the capital of Westbrücken.

Due to the advance of Triple Alliance forces and fearful of Gaullican domination of the continent the then-neutral Kingdom of Estmere in March 1854 declared war on the Triple Alliance hoping to prevent a Gaullican victory against Werania. Estmerish forces were able to advance into northern Gaullica at the battles of x and x aided by Hennish nationalists as well as bolster Weranian forces who were able to push back Triple Alliance forces. The Battle of Trierberg in modern-day Ruttland saw the Soravian armies led by General Jan Herko decisively routed by Estmero-Weranian forces with the retreating army being again defeated at the Siege of Rokrika. The practical defeat of the Soravian army led to the Soravian government who was facing domestic pressure to end the war to sue for a separate peace, de facto ending the Triple Alliance and heralding the withdrawal of Soravia from the conflict. Fighting between Gaullica and Kirenia against Werania and Estmere continued at a stalemate for the rest of 1855 with the battles of x and x failing to provide either side with a decisive victory.

By December 1855 both alliances were facing increasing economic difficulties incurred by war debts, pressure from peace activists, exhaustion within the armies and a lack of progress made. With both sides believing the enemy possessed the means to win the war before the other an armistice was declared following the unsuccessful siege of Aimargues, leading to the neutral nation of Etruria to host the Congress of Torrazza which decided the terms of the peace between the warring powers. The nations of Hennehouwe and Kesselbourg were created as a buffer state between Gaullica and Estmere whilst Werania was awarded Ruttland from Kirenia, with all nations being privy to reparations between each other. Werania was also forbidden to launch further wars of aggression against its neighbours.

The war quickly attained an infamous reputation of brutality, being one of the first wars to be documented within its warring nations with constant newspaper and photographic coverage. It also saw a greater use of newer technology such as explosive naval shells, railways, and telegraphs as well as early instances of trench warfare and blind artillery fire. It's inconclusive peace had a dramatic result for the Euclean geopolitical system - the Triple Alliance who had been some of the dominant powers on the continent since the revolutionary wars saw their ties weaken. Kirenia perceiving its role in the alliance system to lead it to greater risk became more detached from firm alliances; Soravia meanwhile was shown to its citizens to be far weaker than was thought, leading to the First Soravian Civil War. Gaullica was able to maintain its large standing army and its prestige, but was more diplomatically isolated with Gaullican nationalists blaming politicians for suing for peace rather than fighting (the so-called "la légende du coup de poignard") with the loss of Hennehouwe also leading to a longstanding feeling of revanchism. Werania whilst proving itself to be a significant military power and attaining territory was unable to secure its objective of unifying Weranic speaking lands; the war had also shown the country to be diplomatically isolated and that its military was not invincible, leading to the state to pursue a more diplomatic foreign policy. Estmere emerged from the war with great prestige; it not only demonstrated the effectiveness of its army but also was able to solve standing tensions with Werania and diplomatically isolate Gaullica from Euclean affairs.

Since the mid-1700's due to a wave of romantic nationalism and political liberalism across eastern Euclea pan-Weranicism had become a dominant political force within Weranic-speaking areas of Euclea which consisted largely of the states of the multi-ethnic Ahnemunde Confederation and the area of Cisvetania in Sunrosia. Demands for a unified Weranic state increased as a result of the unification of Florena and Etruria during this period, with liberal scholars and nationalists positing the "Weranic question" - that being if there was a Weranic nation and if so where its borders were.

The first attempt of unification was pursued in 1792 during the Weranian Revolution - based off the earlier one in Etruria in 1790 - when discontent with Ahnemunde Emperor Leopold III resulted in the overthrow of the old Ahnemunde Confederation and declaration of the Weranic Republic. The new republic was unstable seeing many of the former constituent states of the Ahnemunde Confederation declaring independence alongside a loss of overseas possessions such as Vilcasuamanas. An attempted war of expansion by the republic under Balthasar Hötzendorf saw it defeated by Estmere in 1805 and returned to the Ahnemunde-era borders, resulting in the Weranic speaking states to once again be divided between a variety of kingdoms, principalities, dukedoms and city states. 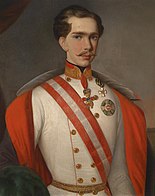 Agitation for Weranic unification continued in these new states, chief among them being the Kingdom of Cislania-Brücken. Weranic nationalists dominated the government of King Leopold Theodor including foreign minister Ulrich von Bayrhoffer, general Karl von Littitz and Reichstag member Klemens Graf von Müller. In 1827 von Bayrhoffer became the Minister-President of Cislania-Brücken where he began a campaign of unification with other Weranic states - mostly through diplomatic means although some (such as the Cislanian-Rotenberger War) were military led. Von Bayrhoffer maintained a delicate balance between radicals who wished for a Weranic Republic based on the 1792 and conservatives who opposed Weranic unification altogether. The impetus for unification became more apparent when in 1840 when the 16-year old Sigismund became King of Cislania-Brücken who initially identified with liberal nationalists moreso than his father.

The annexation of the Kingdom of Rotenberg into Werania in 1842 led to the declaration of the Lands of the Weranic Crown that year with Sigismund being declared Kaiser and von Bayrhoffer Chancellor. Von Bayrhoffer maintained however fragile support in the newly created Reichstag and soon become reliant on a group of Reichstag members known as the Pan-Weranic Party (AOP) who believed in an expansionist ideology that sought to in its moderate form unite all Weranic speakers into one state, with more extreme elements wanting an extension of Werania's "natural borders" through a programme of settler colonialism. 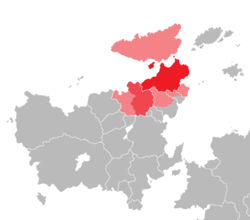 Greater Werania as defined by expansionists. Dark red indicates the Lands of the Weranic Crown, red the Weranic-speaking parts of Sunrosia and light red the lebensraum territory claimed by extreme pan-Weranicists.

End of the War