The Rudolphine Confederation (Weranian: Eidgenossenschaft) was a historical confederation that ruled over much of north Euclea from its declaration in 1027 to the Weranian Revolution when it was replaced by the Republic of Werania in 1786. At its height it spanned across the entirity of modern day Werania, Azmara and Alsland as well as southern Scovern, northern Estmere and eastern Kirenia.

The confederation was formed in 1027 by the princes of northern Weraninland to contest the Estmero-Verliquoian invasion of modern-day Borland. The confederation changed over time from a predominantly pagan to mainly Catholic body. It would retain a rivalry with the Kingdom of Ruttland until the latter became part of the confederation in the Union of Trierberg in 1267 with the Ruttish King Wilhelm I becoming protector of the confederation. By the 1480s however power had shifted to the Cislanian House of Schwarzollen who would dominate the confederation from that point on.

The confederation slowly evolved from being a purely military alliance to by its demise in 1785 a modern, centralised state. It tends to be perceived as a precursor to the modern Weranian state although its legacy affects all its former neighbours. During its existence it was informally referred to by its citizens as the Reich.

The Rudolphine Confederation during its existence slowly developed from a loose series of bilateral alliances to a semi-centralised absolutist state. The confederation was for the majority of its existence governed by kings, bishops, dukes and others who theoretically elected the head of the confederacy, the protector (Reichsprotektor). Over the lifetime of the confederacy there were periods both of greater power being given to the constituent princedoms (as occurred during the late 1500s) and greater centralisation at their expense (as occurred a century later in the 1670s). 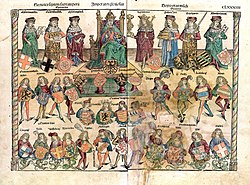 A illustration depicting the structure of the confederation from 1487, with the protector surrounded by the viceroys of the circles.

The initial Eidgenossenschaft (“oath commonwealth”) was similar in theory to the leagues of cities (Städtebünde) that often arouse in northern Euclea. These alliances were often led by a ruler who would act as a military commander with the purpose of defeating external threats by rallying together large armies. Notably these leagues were often created through bilateral treaties and so often had overlapping interests between their members who even occassionally went to war with each other. The early Eidgenossenschaft of Rudolph I was distinguished by being geographically far larger than these previous leagues with Rudolf I having ambitions to centralise it into a single entity akin to the Verliquoian Empire. Although this failed to develop Rudolf I was able in 1044 convince the member princes to sign the Charter of Vorausdorf that officially declared the Eidgenossenschaft to be an “unbreakable” alliance of the founding princes. Notably the Vorausdorf Charter enshrined the principle that forbade a member from unilaterally beginning a war without the consent of the protector of the confederacy. The protector could in the event of war raise taxes on members and request a certain amount of troops under his command.

Over time saw the development of other entities. Beginning in the 1400s the protector appointed a chief minister, the chancellor (Reichskanzler) to administer the affairs of state replacing the previous custom of relying on the state officials from the protectors home kingdom. Following the Amendist Wars a federal diet, the Reichsrat, was created which had representatives from each of the member states leading to a period known as “golden liberty”. However the absolutist reforms of Otto IX ended this period with the rights of the nobility severely curtailed. This absolutist form of governance was almost brought to collapse during the Ten Years' War with the confederation subsequently reconvening the an albeit weakened Reichstag whilst maintaining the centralisation of power. The Weranian Revolution would briefly see the confederation become a constitutional monarchy with a premier (minister-president) replacing the chancellor and an elected legislature, the National Convention (Nationalkonvent).

The Crown of the Karl III, the symbol of the Protector.

The focal point of the confederations governance was the Protector of the Confederation (Reichsprotektor). The protector was one of the monarchs of the confederations member realms ostensibly being chosen by the other members of the confederation. Whilst initially this was followed it quickly became monopolised in the hands of the founding dynasty, the House of Blattenberg who ruled as the princes of Brücken. The post of protector would pass to the House of Algirdas in 1267 after the Kingdom of Ruttland successfully were able to seize power after the death of the childless Karl II. For a period from 1344 to 1517 the position passed through several royal houses with the House of Hachberg consolidating power through a mixture of strategic marriages and bribery. The Hachbergs attempted to turn the Protector into a proto-emperor but would eventually alienate their powerful allies leading to Otto VII to be murdered by his enemies and the Duke of Lower and Upper Cislania, Leopold II of the House of Schwarzollen to take power. Outside a two-decade interregnum during the Amendist Wars the Schwarzollen dynasty would rule the confederation for the rest of its existence. 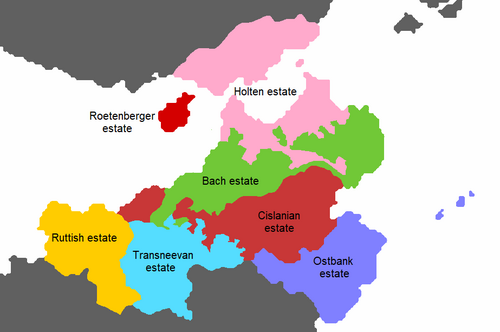 The seven Rudolphine Estates in 1452.

Following the Grand Inheritance when the Duke of Lower and Upper Cislania, Leopold I, became Rudolphine Protector in 1457 the confederation was reorganised at the Congress of Five Hundred in Ostdorf am Main in 1452 into seven estates (Landschaft, pl. Landschaften). Each estate had a diet (Landstand, pl. Landstände) and had various collective taxation and defence responsibilities that streamlined the organisation of the confederation. The creation of the estates thus represented centralisation in weakening the power of individual princes but strengthened regionalism by providing powerful counterweights to the imperial centre.

The seven estates outlined in the Congress of Five Hundred were:

A key principle of the estate system was that no estate could absorb the other. This was because the estates quickly became dominated by noble families and there was a fear that if a single family could dominate the rest that the estate system could be dismantled. The attempt by Franz Joseph I to force a personal union with Ruttland under the House of Schwarzollen would play a major factor in the Ten Yearʼs War. Ultimately, however, the loss of much of the confederationʼs territory would result in the House of Schwarzollen and its cadet-branch, the Schwarzollen-Brückens, to undermine the estate system as they dominated the smaller confederation meaning by the time of the revolution the estates had lost real relevance.