Il Dogado (Lit. The Duchy), officially known as the Federal District of Il Dogado (Vespasian: Distritto Federale del Dogado; Povelian: Distreta Federałe del Dogado), is a federal territory of Etruria encompassing the federal capital of Povelia and surrounding regions. With a population of 988,882 as of 2020, makes it the smallest administrative division in Etruria, yet with a per capita of $25,500 it is the highest in terms of income.

The territory takes its name from the Dogado of the Exalted Republic of Povelia (779-1784), owing to it sharing the exact borders of its historical predecessor. The territory was established in 1888, following the San Sepulchro Revolution, which established the Etrurian Second Republic. Povelia's declaration as the nation's capital, though meant to be temporary, became long lasting owing to its location, geography and established infrastructure.

Unlike Etruria's federal states, La Dogado has only limited self-rule and is subordinate to the federal government in most areas of governance. The government of La Dogado is based around the parliamentary system of Etruria, however, owing to its small size, the General Council of La Dogado is smaller and also holds the responsibilities of a municipal council for the city of Povelia.

The term Il Dogado had a centuries long use prior to 1888, as the capital region of the Exalted Republic of Povelia (784-1784). Under the original term, it only encompassed the city of Povelia and the surrounding islands of the Lagoon. This Dogado was governed directly by the Doge of Povelia until this was transferred to the collective Council of Thirteen. From 1515 until the Republic's dissolution during the Etrurian Revolution, the Dogado was declared to be the primary concern of the Council, especially "its defence and protection." Throughout the Republic's life, the Dogado was one of the most heavily fortified regions in Euclea, with numerous forts lining both sides of the Lagoon and the Bay of Povelia. Following Povelia's annexation into the Etrurian First Republic, the Dogado was abolished and in turn absorbed into the Department of Veratia. However, the city of Povelia was declared the new capital of the united Etrurian Republic owing to its geographical location and easily defendable terrain, the city would remain the capital until 1788, when it was transferred to Solaria.

Following the San Sepulchro Revolution of 1888, the new democratic federation of the Etrurian Second Republic restored the Dogado in its current form, the same year, Povelia was once again declared the national capital owing to monarchist sympathies in the south and in Solaria particularly. As the modern government emerged and required greater infrastructure, city was modernised. During the Great War, the Dogado became a major supply, transportation and arms hub, mass producing rifles, ammunition and supplies for forces on the Aventine Front.

Following the Legionary Reaction and the establishment of the Etrurian Revolutionary Republic, the capital was once again moved to Solaria, though significant government departments and agencies remained in the city. The city was spared the allied air raids suffered by other northern Etrurian cities during the Solarian War, preserving its major shipyards and drydocks for future use.

Il Dogado encompasses the entirety of the Povelian Lagoon, as well as regions inland up to the Francescano Hills, directly north of Povelia, a 15km wide strip running north-to-south along the western side of the Lagoon and along the east to the Peninsula of Saint Dionysus. Running west-to-east across the lagoon are the iconic Povelian Barrier Islands. At the centre of the federal territory lies the Povelian archipelago, where the city itself sits. The mainland areas of Il Dogado form the southern reaches of the Eugenian Plain and is predominately agricultural in nature. Il Dogado has a total area of ‭1,038 km² (400 square miles). 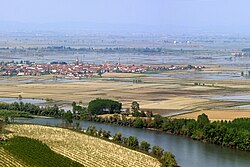 The flat terrain of the mainland areas of Il Dogado.

In recent years, Il Dogado has been in the grip of several major environmental problems, the leading issue facing the territory is the annual flooding of Povelia, which disrupts the operation of the city and has raised long-term questions over its habitability and viability as the federal capital. Another growing issue is water pollution afflicting the Povelian Lagoon. The heavy industry of the mainland has produced significant run-off and waste being dumped in the Lagoon has increased substantially in recent years. Efforts by the territorial government to confront the issue have been hampered by slow federal action and slower action by the north states, who's industrial run-off flows downstream along the Adixe River. The Delta of the Adixe sits south of the barrier islands, though smaller channels enter the western side of the lagoon.

Il Dogado operates as a parliamentary republic, with an unicameral 45-seat General Council elected by universal suffrage every five years. The territory is led by a Prefect who is appointed by the President of Etruria, if the individual is the leader of the largest party or coalition in the General Council. The Prefect heads the territory's executive alongside a Council of Ministers, though the powers of both the Council and Prefect are limited, owing to the subordination to the Federal Government. Both the council and the government also govern the affairs of the Dogado's urban areas, with the authority to organise and manage the local services of Povelia. As such, the Prefect is also referred to as the "Mayor of Povelia."

Marco Antonio Cristofori is the current Prefect of Il Dogado.

While the Dogado government has full authority in local matters, similar to other cities in Etruria, its authority in territorial matters is limited by the Etrurian constitution. The Etrurian federal government has full control over policing, commerce, industry, infrastructure and taxation. The Dogado's budget is determined by local taxes and an annual stipend provided by the federal government.

As of the 2017 Territorial Election, the Democratic Alternative for Etruria won a slim majority in the General Council, with the Tribune Movement becoming the official party of the opposition, the Social Democratic Party won two seats. As a result, Marco Antonio Cristofori was elected Prefect of the Dogado.

The Povelian Question (Vespasian: Domanda Povegliana) is a decade-long debate over the viability of Povelia as the national capital. Since the restoration of democracy in 1983, debates over whether the capital should be moved to Solaria has long gripped the federal government. The limited infrastructure of Povelia, the issue over the annual flooding and nationalistic arguments regarding Solaria have found attraction among Etrurian voters, however, the civil service has argued in response tha moving the capital to Solaria "though easier than many would expect, would leave significant constitutional questions regarding the state of Solaria and the Federal Territory of Povelia." 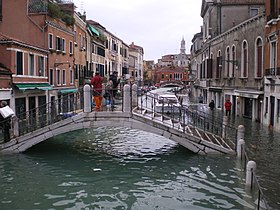 Flooding of Povelia in 2009 caused severe disruption to the Etrurian government, with over 300,000 records destroyed after a government archive was flooded.

It has been noted that every administration since 1983 has attempted to find a lasting solution to the question, without much follow through. According to commentator, Luigi Pesci, the "issue holding back a solution is above all, sentimentality. Povelia was declared the capital of the Etrurian First Republic following the unification of Etruria because of its location and the revolutionaries desire to avoid upsetting the barely cooperative Povelian elite. The National Solarians moved the capital to Solaria for propaganda purposes, but left most of the federal government's infrastructure on the islands of Povelia. Even when Povelia wasn't the capital, it functioned as the capital."

Following the 2016 Etrurian general election and the victory of the Tribune Movement, the debate was raised after the new government expressed a desire to "end the uncertainty around Povelia." Following its plans for major flood defences around the lagoon, a proposal was leaked to the press, indicating that the Tribunes were considering "splitting the branches of government." The proposal saw the maintaining of the supreme court in Povelia, while moving the legislature and executive to Solaria. However, the proposal was criticised by Novalians and Carinthians for being "Vespasian centric." In late 2019, the Tribune government announced that it was "exploring the moving of the capital to Solaria indefinitely in great detail."

The dominant sectors of the Dogado's economic are the service sector and tourism. While citizens of the Dogado are either employed in the services sector, including government departments, an estimated 29% of the workforce are involved in tourism. In terms of profit and contributions to the Dogado's revenues, tourism dominates the economy. Yearly visitations to Povelia vary between from 22 million to 30 million, with an average of 16,000 tourists visiting daily. This has had a profound effect on the city itself, the standard of living of locals and regularly disrupts the Etrurian government.

Since the 1990s, heavy industry has been on the rise on the mainland. The new city of Endustria has since become a major hub for Etrurian shipbuilding, steel production and the manufacturing of light goods. In 2015, Caviglia Rotaia established a locomotive plant in Endustria, employing some 2,000 people. The port of Endustria is also the primary station for Etruria's fishing fleet operating in the Bay of Povelia, to the coast of San Francesco.

According to the Federal Office of Statistics 2020 demographic study and estimate, the Dogado had a population of 488,882. This includes the 69,486 who lived in Povelia and the ‭419,396‬ who reside on the mainland. This is a decrease from 500,000 as of the 2016 Census, which has been blamed on the overtourism of Povelia, which has both driven out residents from Povelia itself and Endustria.

The largest five cities of the Dogado are:

Culture in the Dogado is dominated by Povelia, which boasts numerous opera houses, museums, resturuants and remains Etruria's top ranking tourist destination. The Dogado also boasts the legacy of the Exalted Republic of Povelia with its unique architecture, monuments and sites. Endustria for its part offers the primary sporting facilities, including the home stadium of S.S San Marco.